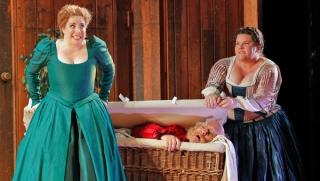 How Do You Set a Record? The Revelation in Recordings

Brahms, and a bit of Liszt, got reconstructed at Stanford University over the weekend.

It was part of the Reactions to the Record Symposium, sponsored by the university’s music department and held at the Bing Concert Hall Studio, a small cubical space tucked behind Bing’s main auditorium.

The purpose of the symposium is to study early recordings, mostly from before about 1930 — on 78-rpm records, cylinders, and piano rolls — and consider the forgotten and quite astonishing performing styles that they reveal to us. It takes a lot of consideration, because this is the fourth symposium on the topic that Stanford’s held since 2007.

It takes even more consideration for today’s musicians, steeped in and comfortable with modern styles, to try to reproduce the older manner. This year, the Ironwood Ensemble, consisting of five of Australia’s top young instrumentalists, came all this way to give it a try.

Ironwood’s members spent much of Saturday educating the symposium in Brahms. The reputation of his music as being heavy, clotted, and uncomfortable to play undergoes a change when it’s played closer to the way he expected it to be played.

Ironwood’s pianist, Neal Peres da Costa, described the revelation he’d received on hearing a recording of a Brahms piano sonata, by Etelka Freund, who in 1895 at age 15 had played extensively for Brahms himself and received advice from him. A half-century later, her record preserved a lyrical style in the slow movement by bending rhythms, arpeggiating chords, and breaking her hands away from simultaneity. Da Costa’s conclusion was that the composer’s instruction “espressivo” had freed her to do this in an era when stricter reproduction of the score had already taken over.

A workshop demonstration took up most of the afternoon. Ironwood’s first violinist, Robin Wilson, accompanied by his colleagues, went through the score of the first movement of Brahms’s Piano Quartet No. 1 in G Minor, Op. 25, looking for clues. They focused particularly on the tiny hairpin marks underneath many notes, which today are taken as instructing for tiny swells or diminishments of volume. Textual and historical evidence suggests that, instead, they’re more general indications of emphasis. Players using vibrato only for ornamentation, as 19th-century performers did, might, for instance, consider using vibrato here. Much is left to the performer’s preference.

After Ironwood demonstrated its way with the Piano Quartet, Wilson and da Costa coached two students in the first movement of the Violin Sonata No. 1 in G major, Op. 78, calming and softening their performance to a nostalgic, contemplative gentility. None of that, however, was sufficient preparation for what the Ironwood Ensemble would do in that evening’s concert to the Piano Quintet in F minor, Op. 34. Though it wasn’t what would actually have been heard in Brahms’ salon, it did engage with that style. To listeners used to the typical modern, crisp, fast, rattling performances of this piece, it was a real startler.

For one thing, it proceeded with great deliberateness, as if the purpose of the performance was to communicate the meaning of each note, rather than to reach the end with a blaze. This meant, too, that certain sequences, especially tags at the ends of phrases, were marked by notable ritards. Combined with all the energy that would go into a more skimming performance, this meant that it sounded a lot slower than it actually was played, as if the music were tromping determinedly through thick mud. That took some getting used to.

All the string players used gut strings, as would have been regular practice when the work was new. This, too, made the sound darker and more deliberate. It also meant that, even as the string players shared their ritards together, they also went out of tune together. Each movement was followed by an extensive retuning session, something 19th-century audiences were undoubtably used to.

The Piano Quartet in F Major sounded a lot slower than it actually was played, as if the music were tromping determinedly through thick mud. That took some getting used to.

Wilson plunged into period performing style more fervently than his colleagues. His extreme restriction on vibrato and frequent use of portamento slides between notes brought his tone at times quite close to the sound preserved on early recordings of Brahms’ favorite violinist, Joseph Joachim, who sounds like adenoidal, insectoid whining to modern ears. Apparently, though, it’s what was admired in the 19th century.

Violist Nicole Forsyth burst out with some gut-wrenching, moaning solos. In general, hers and the other inner lines were easy to hear as separate voices, bringing out some details not usually audible in this work. Second violinist Rachael Beesley and cellist Daniel Yeadon did not venture quite so far into period style.

De Costa’s frequently arpeggiated chords at the piano made the chords feel slightly crunchy and was not the grand, ostentatious rolling affected by modern pianists when the score instructs it. Combine that with Wilson’s portamento and the relaxed and easy violin-piano pairing sometimes resembled the casual strumming of a ukulele. That is not a comparison that has ever come to my mind with Brahms before.

Like the Ironwood Ensemble, the big news of the symposium came from Australia, in the form of Stanford’s impending acquisition of a huge trove of 7,500 early 20th-century piano rolls, and 10 instruments to play them on — like computer software, piano rolls are often specific to a particular manufacturer’s machine — the lifelong collecting passion of the late Denis Condon, a music teacher from Sydney. His heirs, alas, could not find any institutions in Australia which could undertake to study and play the rolls and maintain the instruments, rather than sticking a few samples to gather dust in museum showcases. Stanford, though, is ready to take this monumental project on.

There was much discussion of this on Friday: what’s happened already and what comes next. Already many of the rolls have been converted into MIDI files for easy use and portability.

The Forgotten Art of Preluding

Kenneth Hamilton, a music professor now at Cardiff University, gave both his own presentation and took the slot intended for keynote speaker Richard Taruskin, kept away by illness. Talking in a thick Scottish accent, with something of the physical appearance and technical enthusiasm of a young Bill Gates, Hamilton was endlessly amusing as he described the vanished practice of “preluding” (yes, that’s a verb), a now-forgotten habit of pianists from the 19th and early 20th century of beginning their recitals, and sometimes linking individual works, with short, improvised or composed passages of their own. Some of these were written down or recorded, and Hamilton played them, describing how they were used as pivots between pieces in different keys.

Preluding developed as a way to test out unreliable 19th-century pianos, to see if any keys stuck (which is why many such preludes range all over the keyboard), and also to tell the audience to shush because the concert is starting. It would be hard to reintroduce the process today, Hamilton said, because “We try very hard to perform historically, but we get very annoyed when the audience behaves historically.” His own students are terrified of improvising, he said.

“We try very hard to perform historically, but we get very annoyed when the audience behaves historically.” — Kenneth Hamilton, Cardiff University

Hans von Bülow made a prelude into a funny commentary when he was touring with a singer whose work was less than optimal. She’d perform first, and then Bülow would come out, sit at the piano, and play the melody from Beethoven’s Ninth which goes with the words, “O Freunde, nicht diese Töne!”

Hamilton delivered his second lecture on the mutability of Liszt’s piano compositions — how he’d play them differently out of simple boredom with the original score or from forgetting how they went, though he would not always write down his new version.

Hamilton’s point was to encourage an escape from the tyranny of the score. In other types of music, he noted, written music is only an aid to performance, which is always considered the real music. There’s room for many different styles of performance, and we need to open our ears to the possibilities before us. This conference was a beginning of that.