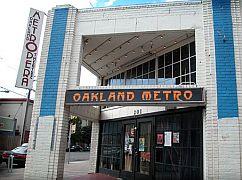 Inside the Music: Oakland Opera Theater at 20

Michael Zwiebach on October 9, 2007
Oakland Opera Theater is one of those refreshing arts organizations that thrives on risk-taking. Not content to restrict its repertory to 20th-century and contemporary works (an idea that would give most managers nightmares), the company brings a distinctive approach to productions both old and new. As evidence, consider the current offering at the Oakland Metro Operahouse, Benjamin Britten’s chamber-size masterpiece The Turn of the Screw, complete with trapeze artists, running through October 14 (see review). On the occasion of the company’s 20th anniversary, we decided to take a peek behind the curtain at an organization that has continually beaten the odds — like so many other scrappy regional opera companies that San Francisco Classical Voice comprehensively covers (itself an increasing rarity in the media world). A recent conversation with Artistic Director Tom Dean, who also directed The Turn of the Screw, began with the obvious question first: What compelled him to found the opera company, knowing that it would be such a drain of money and time? The answer, coming from a composer, was equally obvious: Dean wanted to write operas and see them produced. There was only one solution available: "We only did original company-written-and-produced operas for the first 10 years of our existence [1987-1997]," he says. The operas were created kind of like group theater or improv productions might be. "We often had more than one person working on the same piece. We’d assign characters out: I’d get the ingenue, someone else would get the villain, [and so on]." These operas often remained in repertory for years after the premiere, being worked on and improved. No wonder that, in true experimental-theater fashion, they called themselves the Underworld Opera Company during this period. But such collaborative effort is hard to sustain, and eventually the group began to look for new challenges. "In 1997, we decided to change our focus a little and produce more shows every year, and include composers who were in the modern opera canon," says Dean. It’s easy to see this decision as an expansion of the original idea behind the company. Many of the influential operas of the 20th century, particularly the American ones, are not in the repertory of opera companies. So if you’re dying to see those works staged, or to investigate them in performance, you’re most likely going to have to don your producer’s hat. Dean is a Philip Glass fan, as you might guess from the three productions that the composer’s operas have received at this small company. And there were other works, Dean says, like Stravinsky’s The Rake’s Progress and Britten’s Screw "that I had been in love with forever and really wanted to do." At the same time as the evolution in programming, the company changed its name to the present Oakland Opera Theater. "We became more of a community opera company, more rooted in the community," Dean explains. "And we got a lot more funding that way, too." The producer readily acknowledges that Oakland’s arts council has been supportive, one reason the company manages to stay on an even keel.

The production of Glass’ Akhnahten in May 2004 was a watershed for the company, both in terms of its visibility and artistic horizons (see review). Reducing the massive score to 12 instruments was not an easy task for Deirdre McClure, the company’s music director, who joined the company for the 2000 season. And it was the first time Oakland Opera Theater worked with an outside stage director, Ellen Sebastian Chang. The audacity of the project, even if the results were mixed as SFCV’s reviewer reported, opened the path to the company’s future. That was only three and a half years ago. Dean no longer composes, concentrating instead on directing and producing. And recently, his tiny company was in the news again, when it suddenly had to relocate from its longtime theater near Jack London Square after the landlord quadrupled the rent. It moved to the much roomier space in the former Black Sea Gallery nearby on Third Street in Oakland. Of course, as anyone who had been to the company’s old address at Second and Broadway could guess, a bigger theater had been on Oakland Opera Theater’s wish list for some time. "We couldn’t get enough audience into our old location," Dean explains. "And we’ve kind of outgrown it in terms of operas." The dancers in the company’s Les enfants terribles had tremendous difficulties keeping their spacing, and even making their entrances and exits. "And I don’t think we would ever have gotten the Turn of the Screw orchestra into the old space. Once again, I asked Deirdre to reduce it to nine or 10 instruments and she came back and said, 'Well, I tried for about six weeks but it’s just too tightly composed.' " Rent is the major expense for any arts group, and in expensive metropolitan areas, as Janos Gereben recently noted in SFCV’s Music News column, organizations are always trying to stay one step ahead of rising prices. “It’s the typical situation,” says Dean, with perhaps a trace of complaint in his voice. "When we went into Second and Broadway there were abandoned buildings everywhere. And we took over a building that had been abandoned and red-tagged by the city, and we fixed it up with volunteer effort and a lot of legwork with the city. And we managed to make it into a functioning arts space after much effort. So oftentimes it’s artists who come in and start to rehabilitate an area. And then once it’s done, [the area] is more desirable for people with money to come in." As it happened, finding a new location for the Oakland Metro Operahouse was easy, for purely serendipitous reasons. "Well, it’s about three blocks away and there was a sign outside," Dean deadpans. "It turned out that I had worked with the landlords before and they are patrons of the arts. They had recently taken in Pro Arte Galleries and various other artists who were being priced out of Oakland locations. So I really have high hopes for them and for our new space."

A High-Flying Take on Britten

Dean also has high hopes for his new production, an opera he has long wanted to do. "It’s one of the pinnacles of 20th-century opera, no question about it,” says Dean. "And it’s a ghost story and Halloween’s coming up," he adds, deadpan once again. As with the new theater, the cast seemed to fall into place. Anja Strauss, playing the Governess, and Gerald Seminatore as Peter Quint are new to the company, but if you want to hear Dean rave — and for him that means a slight rise and speeding up of his monotone — ask him about the children in the cast. "We found these amazing kids — two sets of them. Oftentimes Flora is cast with an adult, but not here. Susan Swerdlow, who’s our assistant musical director and usually deals with the chorus, has had a lot of experience with children’s choruses. She did a lot of work finding the kids for us, tracking them down through all the choral directors in the Bay Area." In discussing his directorial approach to Britten's opera, Dean begins with Henry James' story. Britten gives the ghost character Quint a corporeal presence, thereby intentionally and decisively intervening in the story’s carefully set up ambiguities. "The story, because it’s written in the first person and you can’t really trust the narrator, makes it hard to tell if there’s really anything going on or if [the Governess] kills Miles or it's all her problem," he says. "And the ghosts don’t talk or interact in the novel. Britten makes them a lot more real than they are in the original. So while there still remains some ambiguity, the opera weighs the scales toward the reality of the haunting rather that the psychological drama within the Governess' head." In a favorite Britten dramatic theme, the outsider, the "other" — Quint in this case — becomes the dramatic focus. Ghosts with real bodies can make for a problem of operatic dimensions. But Dean’s decisions about how to produce the opera stem as much from ideas about the kinds of work he wants to produce as from the piece itself. He resets the work on a Louisiana plantation, for example, in an attempt to make the Victorian story more resonant for himself and his contemporary audience. "We’re mostly interested in American themes [at Oakland Opera Theater] — American composers, and American operas," Dean explains. "So the ultra-British nature of this piece may have been why we didn’t do it sooner. But our production manager, Mia Steadman, suggested this whole resetting because she loves Louisiana and New Orleans. And she says every plantation has at least two ghosts. [The resetting] helped us bring in a multiethnic cast and to make commentary about what were originally class distinctions in England. In our production, those end up being racial and economic divisions. We’ve been committed to multiethnic casting forever," Dean says, "and here we are in Oakland, so it seemed like that [aspect of the production] worked out." Resetting a work is a settled part of contemporary operatic stagecraft. But why are the trapeze artists in the show? Dean’s answer is as straightforward as all his answers. "I didn’t want the ghosts just walking around on the ground," he begins. "I wanted to mimic classic horror movies and get away from the traditional 'plant and sing' situation. So we have the body of Quint and the voice of Quint and the body of Miss Jessel and the voice of Miss Jessel. It’s creepy." And, he hurries to add, "It’s not like we’re using traditional circus apparatus. We do have a lot of rigging so the ghosts can fly through the air." And by chance, Dean knew some trapeze artists. “We have a monthly circus event at the Oakland Metro Operahouse, first Saturdays of the month. And we get all kinds of circus performers in there, fire-eaters and clowns and so on. So that’s where we met our trapeze artists — and now they’re actually bartending for us at the venue.” After Turn of the Screw closes, Dean and his company plan to stay close to their roots. Oakland Opera Theater commissioned Oakland opera composer Mary Watkins to write Dark River: Mississippi 1964, about the civil rights movement, which it previewed as a work-in-progress in June (see review). "So we’re kind of heading back into getting local composers involved, or at least more so than we have been," says Dean. "But I’m sure we’ll continue to do classics." Whatever it does next, changes and surprises are bound to continue from a company that started out on the edge and plans to stay there.