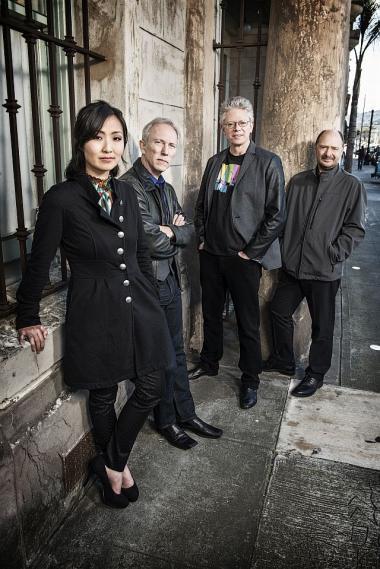 Focusing on Kronos’ multitude of ongoing relationships with San Francisco Bay Area composers, arrangers, and musicians from many corners of the musical landscape, as well as the huge energetic promise of local students, the concerts will feature some of the region’s most engaging composers  — from Minimalism pioneer Terry Riley to renowned Indian violinist Kala Ramnath  — and important guest musicians, including Persian singer Mahsa Vahdat and traditional Vietnamese instrumentalist Vân-Ánh Vanessa Võ.

Opening night is called The Sun Rises, referring to Vahdat’s work of the same name, which will have its world premiere in that concert. A highlight of the 2017 festival is presentation of works by Iranian-American composer Sahba Aminikia, who serves as the festival’s artist-in-residence. The entire Feb. 4 concert program is by Aminikia, with the participation of the Mobius and Delphi Trios, and the Amaranth Quartet.

On Feb. 2, Aminikia’s Grandma’s House will have its world premiere, with student guests from the school bearing the name of another “Grandma” — the Ruth Asawa San Francisco School of the Arts. The work is described as a playful, jazzy fanfare, based on tunes from Iranian children’s TV shows from the 1980s, the composer’s childhood. The title is taken from a children’s show that was popular during this post-revolutionary era, called Khooneye Madarbozorge (Grandma’s house), which was similar to Sesame Street.

Churches have been a mainstay of music for millennia, and in the Bay Area there is evidence of that all around, with some truly impressive concert schedules among them. One of the leading organizations — just across Golden Gate Park from my own Richmond District “musical neighborhood” — is a champion in the Sunset District, Incarnation Episcopal Church.

On 29th Avenue, between Moraga and Noriega, the church’s Sunset Music & Arts program runs a plethora of concerts, including instrumental and vocal series, chamber music and ensemble, choral music, and opera. Events are either free or donations requested or offered at a low price — such as $10 for the open rehearsal of Island City Opera’s production of Don Pasquale, at 4 p.m. on Jan. 7. (Coincidentally, but not linked, both Sunset Music & Arts and Island City Opera are only three years old, but with a robust, mature presence.)

Dohnányi and Taneyev from [email protected]

The unusual programming and consistent excellence that has characterized [email protected] seasons are exemplified in the organization’s new CD, Wu Han LIVE II. It is part of the “[email protected] LIVE” series, in collaboration with ArtistLed, presenting two great but rarely performed quintets heard during the festival — Erno Dohnányi’s Piano Quintet No. 1 in C Minor (recorded during the 2014 season) and Sergei Taneyev’s Piano Quintet in G Minor (recorded this summer).

Wu Han says of the CD: “These unknown masterpieces require musicians’ advocacy in order to flourish in the world of chamber music, and I feel privileged to have the opportunity to use [email protected] LIVE’s platform to continue to promote these important works.”

Dohnányi’s 1895 quintet continues the line of chamber works by Brahms, Schumann, and Dvorák, with a rich melodic sound. Taneyev’s work (1910–1911) is characterized by the Russian academic style of the late 19th century and the dominance of St. Petersburg’s “the Five” — Balakirev, Cui, Mussorgsky, Rimsky-Korsakov, and Borodin. Serving as director of the Moscow Conservatory, Tanayev’s many prominent students included Scriabin and Rachmaninoff.

Having continued as composer through the original trilogy, the prequel trilogy, and the sequel trilogy now in progress, John Williams has become the only individual to have a major, active creative role in every single Star Wars film — until now.

While Williams works on the score for next year’s as-yet-untitled Episode VIII, Michael Giacchino was tapped (after reshoots pushed the picture outside the availability window of original hire Alexandre Desplat) to create the music for Rogue One, a film that exists within the continuity of the Star Wars universe, but outside the numbered “saga” installments. (It’s getting mixed reviews.)