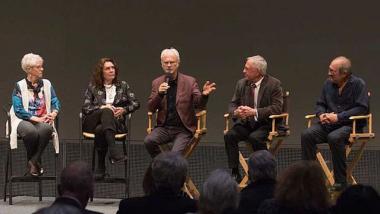 If you have just a gram of 24K gold and the current price stays steady at $1,300 per ounce, cash or plastic for that one gram ($45) will get you into the San Francisco Opera’s spectacular all-day symposium on Oct. 28, where you can learn everything about the Gold Rush — musically and otherwise.

The event is in preparation for the world premiere of John Adams’s Girls of the Golden West, Nov. 21-Dec. 10.

Adams, among his many distinctions, is known for what were once dubbed “CNN operas,” about such historic events from the recent past as Nixon’s visit to China and the development of the A-bomb (Doctor Atomic). This time, he and librettist/director Peter Sellars have turned their attention to the real setting and history of Puccini’s La Fanciulla del West (Girl of the Golden West).

The opera and the symposium both will deal in-depth with the history of the discovery of gold in 1848 and subsequent migration of people from around the world to California, creating dramatic stories of heroism and collaboration, competition and scarcity, fortunes found and made, even in the midst of misery.

The symposium, running from 9 a.m. to 4 p.m. will begin with the composer and director-librettist Peter Sellars discussing the opera, followed by two panels of historians, and concluding with Corey Jamason and Eric Davis presenting a musical history of the period, illustrated with performances by tenor James Hogan and baritone Radames Gil.

One session (11 a.m. to 12:15 p.m.) is dedicated to the discussion of Dame Shirley, whose letters from San Francisco and the gold fields provided an important source for the opera. Historian Marlene Smith-Baranzini and journalist-historian Gary Kamiya will participate in the session moderated by S.F. Opera dramaturg Kip Cranna.

An afternoon program, “Women, Culture, and Politics in the Gold Fields,” will feature geographer-historian Mark McLaughlin, historian Christopher O’Sullivan, and writer Mary Volmer examining the sociological and political settings of the period.

Korean Music, Art, and Fashion on Both Sides of the Bay

A happy coincidence brings major Korean music and arts events to both Berkeley and San Francisco. At Cal Performances, there will be two concerts and a day-long residency on Oct. 28 by the Korean National Gugak Center Creative Traditional Orchestra and UC Berkeley faculty.

Then, a few days later, the Asian Art Museum opens an exhibit, Couture Korea, about how “international haute couture is finding inspiration in Korean art and culture.” The museum will show some 120 works, in the context of fashion as “an enduring expression of social and cultural values.”

“Gugak” denotes Korean traditional music, including the major genres of folk music and court music. With a history dating back to the music institute of the Silla Kingdom in the 7th century, the National Center for Korean Traditional Performing Arts was founded under its present name in 1950, the year when the Korean War began.

Gugak’s afternoon concert offers six world premieres composed specifically for the orchestra by three University of California faculty, including Edmund Campion, chair of UC Berkeley’s Department of Music and Director at the Center for New Music and Audio Technologies. The others are by David Evan Jones of UC Santa Cruz, Chinary Ung of UC San Diego, Shih-Hui Chen, George Lewis, and Lee Geon-yong. The evening concert features traditional Korean court and folk music. The orchestra’s residency is a collaboration with the Pacific Rim Music Festival at the University of California, Santa Cruz.

Cal Performances Executive Director Matías Tarnopolsky says “Anchoring the collaboration with world-premiere compositions by faculty members from three campuses in the University of California system is a perfect example of the creative and convening power of Cal Performances. Audiences will hear thrilling new works alongside performances of centuries-old Korean court and folk music in programs that tell a dynamic story of the evolution of an art form, tracing an arc through history, right here on the Zellerbach Hall stage.”

Two public programs — free to the public — are planned as part of the orchestra’s residency. Hi Kyung Kim, professor of music at UC Santa Cruz and founder and artistic director of the Pacific Rim Music Festival, will host a public forum with the visiting orchestra’s artistic director, Park Chi-wan, in conversation with the six composers featured in the afternoon.

Even before their conquest of England in 1066, Norman knights arrived in Saracen-controlled Sicily, probably as pilgrims either on their way to or returning from Rome or Jerusalem. Pretending to serve as mercenaries variously to the Lombards, the local lords of Benevento, or the Byzantines, they plotted long-term opportunities for themselves in Sicily and created them.

Sicily under the Normans became a crossroads among Norman-Catholic, Byzantine-Orthodox, and Arab-Islamic cultures, endowing Palermo with great art, glorifying centralized royal and divine power, such as in the case of the famous mosaic of Christ Pantocrater in Monreale.

On Friday evening, the program is a musical lecture-performance, “Sicily at the Opera: Sicilian Life on the Operatic Stage,” presented by Kip Cranna of the S.F. Opera, with performances by soprano Marie Plette and bass-baritone Philip Skinner, with piano accompaniment by Bryndon Hassman. The obvious selections are from Verdi’s period-appropriate I Vespri Siciliani (The Sicilian Vespers) and Mascagni’s location-apt Cavalleria Rusticana (Rustic Chivalry), and more.

Among related events is a Humanities West book discussion of Jacqueline Alio and Louis Medola’s The Peoples of Sicily: A Multicultural Legacy, at 6:30 p.m., Nov. 15, in the Commonwealth Club of California.

San Francisco gets the opera’s formal world premiere in November.