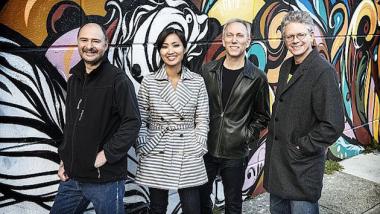 Kronos Quartet Carries On with “Fifty for the Future”

The Kronos Quartet’s unique, magnificent “Fifty for the Future: The Kronos Learning Repertoire” project will be on exhibit again Nov. 7 at a free concert with San Francisco public school students in the Conservatory of Music. Admission is free, but reservations are required.

The concert will mark the fourth release of free music created for young musicians in the “Fifty for the Future” project whose purpose is to have 50 new string quartet works created by an international group of 25 female and 25 male composers, music for the training of students and emerging professionals. Launched in 2015, the initial 15 scores of the initiative have been downloaded over 4,250 times in 60 countries and territories worldwide.

At the Nov. 7 concert, the Kronos will perform Vrebalov’s My Desert, My Rose and Thelen’s Circular Lines; the Ruth Asawa School of the Arts Chamber Orchestra will play Knox’s Satellites: III. Dimensions; and students from Lowell High School  will play Giddens’ At the Purchaser’s Option, Benshoof’s sweeter than wine: II. Postscript, and Wu Man’s Four Chinese Paintings: II. Turpan Dance. An orchestra consisting of Kronos and all the students will perform Fodé Lassana Diabaté’s Sunjata’s Time.

Passages in the music remain a puzzle for me: “Where have I heard that before?” The vocal line is just one note, over a rising exultant chord progression, something out of the Les Miz school. But what is it?

No matter, I welcome the beautifully stylish film, Ang Larawan (The Portrait) to the AMC Kabuki 8 Theaters on Nov. 9, at the opening of the inaugural Cinematografo International Film Festival and Industry Forum. The event is dedicated to emerging and established Filipino and Filipino-American film and television.

Corey Tong, adviser to the festival, says he, festival director Miguel Sevilla, and the organization’s leadership agreed that Ang Larawan “would be a unique, romantic vision of what life was like in Manila before World War II — a mix of colonial influences, musical or not, from Spanish Catholicism to American vaudeville.”

Manila, “the Pearl of the Orient” before World War II, is “not the city we know today,” says Sevilla. “It was rebuilt from the ground up after the U.S. carpet-bombed the city and reduced it to rubble. The movie represents the last time the city was in its golden age — a Manila we may not see again.”

The musical is based on Nick Joaquin’s play A Portrait of the Artist as Filipino. First published in 1952, the works has been seen numerous times on stage and screen, both in English and Tagalog. In 1997, the forerunner of Culturtain Musicat Productions Inc. staged Larawan, the first musical rendition of the play, with a libretto by Rolando Tinio and music by Ryan Cayabyab. The film version is the work of Loy Arcenas, an award-winning Broadway set designer and theater and film director.

Cayabyab, 63, taught music theory and composition at the University of the Philippines College of Music for two decades. He is known as a composer of eclectic, modern, and popular music, and has written several Masses, film and TV scores, ballets, and a-cappella song albums. He was the only Asian winner of the Onassis International Cultural Competition in Greece with his MISA 2000.

Cinematografo Festival is named after the first movie theater in the Philippines, which opened in 1897. It was the venue introducing Filipinos to the custom of going to the movies. The new festival in San Francisco aims to continue this tradition and “draw in a wider audience of Asian-American and independent cinephiles and movie lovers across the San Francisco Bay Area and internationally.”

Among other films to be shown during Cinematografo is the 2016 Venice Film Festival’s Golden Lion prize-winning The Woman Who Left, by Lav Diaz, based on Tolstoy’s God Sees the Truth But Waits; and Avid Liongoren’s Saving Sally, a quirky hybrid of live action and animation.

Director Ramona Diaz is honored with a tribute and a retrospective this year. The festival will screen her 2017 Motherland, and two more of her documentaries: Imelda, about the former Filipino first lady, and Don’t Stop Believin’: Everyman’s Journey, about the discovery and rise of rock band Journey’s lead singer, Arnel Pineda.

Two original short films made by Filipino-Americans are set to have their world premieres in the festival: Melanie Lim’s Anito and Bianca Catbagan’s Supermodel.

Among the global celebrations of John Adams’s 70th birthday this year was his Artist-in-Residence season at the Berlin Philharmonic, and now the orchestra is releasing a box set of four CDs and two Blu-Rays of his works.

The John Adams Edition on the Berlin Philharmonic’s in-house label is distributed in the U.S. through Naxos beginning on Nov. 10. The set also includes a documentary and the composer in conversation with Sarah Willis and Peter Sellars, and a 90-page book with an essay by Alex Ross. (See also Adams in conversation with the Philharmonic’s first concertmaster — and Crowden School alum — Noah Bendix-Balgley.)

Performances are conducted by the composer himself (Harmonielehre and Scheherazade.2 with violinist Leila Josefowicz), Gustavo Dudamel (City Noir), Alan Gilbert (Short Ride in a Fast Machine and Lollapalooza), Kirill Petrenko (The Wound-Dresser with baritone Georg Nigl), and Sir Simon Rattle (The Gospel According to the Other Mary).