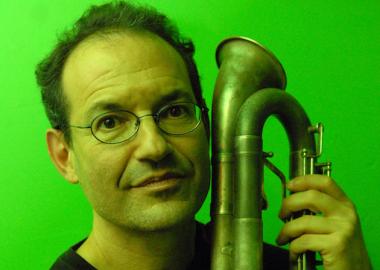 Jazz Blooms in May

There might be only a handful of bona fide jazz clubs in the Bay Area, but jazz musicians are a tenacious breed. Give ’em an inch and they’ll turn a bookstore or an empty storefront or a piano emporium into a concert hall. One focus of these monthly dispatches is to highlight where jazz is pushing through the cracks and finding a way to manifest in the midst of an economic climate that’s downright hostile to the performing arts.

Unlike pianists, bassists, and drummers, vibraphonists as a rule don’t get many calls for gigs. In order to thrive on the instrument you’ve got to make things happen for yourself, and four-mallet expert Tyler Blanton is one of the most exciting young vibraphonists coming along. The California raised, Brooklyn-based player hits Oakland’s Piedmont Piano as part of a West Coast tour with Brooklyn pianist Glenn Zaleski, and the rising L.A. rhythm section tandem of drummer Christian Euman and bassist Aidan Carroll (who came through town in February playing with powerhouse vocalist Lisa Fischer). Blanton is focusing on music from his consistently engaging new album Sense of Place (Destiny Music), a quartet session that showcases his capacious melodic imagination.

Berkeley pianist/composer Myra Melford is an invaluable renewable resource and it’s fascinating to watch different Bay Area institutions figuring out how best to make use of her mega-watt creativity. Weeks after Cal Performances announced a concert series she’ll be curating next season, the S.F. Contemporary Music Players gives the premiere of Homogenous Infiltration, her piece for improvising piano soloist (Melford, natch), chamber ensemble, and fixed media. The SFCMP commission is part of a two-day event at the SFJAZZ Center highlighting the work and influence of little-known composer Julius Eastman (1940–1990), who brought a keen dramatic sensibility into the Minimalist movement. The program also includes works by Eastman, Sidney Corbett, Fernanda Aoki Navarro, LG White, Adam Strawbridge and Wyatt Cannon, with a series of preconcert “How Music is Made” composer talks and music demonstrations.

Over the past four decades San Francisco pianist/composer Jon Jang has created a searing body of politically engaged works, often excavating significant moments in Chinese-American history and overlooked cross-cultural alliances. He premieres his latest piece, A Choy's Chance, A Chinaman's Chance at San Francisco’s Old First Church, commemorating both his uncle Philip Choy (1926–2017), longtime leader in the Chinese Historical Society of America, and the 150th anniversary of the completion of the transcontinental railroad, which was largely by built by Chinese immigrant workers. Working in collaboration with poet/performer Genny Lim, the Jangtet features tenor saxophonist Hitomi Oba, trombonist Nick DePinna, bassist Gary Brown, and drummer/percussionist Deszon Claiborne.

One of the most depressing disruptions wrought by the rise of the digital economy is the decimation of bookstores. All the more reason to join in celebrating the 20th anniversary of Eric Whittington’s Bird & Beckett Books & Records in San Francisco’s Glen Park neighborhood, which is also an essential Bay Area jazz outpost. The store is marking the milestone with 10 days of music, starting May 10 with a 5 p.m. trio set led by pianist Tammy Hall, a commanding player usually heard accompanying the region’s best jazz vocalists, and a 9 p.m. trio set co-led by San Jose-raised New York drummer Sylvia Cuenca and veteran guitarist Paul Bollenback. Other highlights include drummer Scott Amendola and Phillip Greenlief’s duo (7:30 p.m. May 11), guitarist Scott Foster’s sextet (5:30 p.m. May 17) and pianist Grant Levin’s trio (4:30 p.m. May 19).

The Berkeley clarinetist has been spending a lot of time outside the Bay Area in recent years, forging creative connections with a brilliant array of improvisers. But nothing in his far-flung travels was quite like Italy’s Civitella Ranieri artist-in-residence stint in the summer of 2017, when he spent several weeks living in a 15th-century castle in Umbria. Delving into a book of poetry by Gjertrud Schnackenberg, Heavenly Questions, he was particularly struck by the 2010 volume’s opening piece, “Archimedes Lullaby,” an extended meditation on Archimedes in his final days. He premieres the new evening-length work Archimedes Lullaby at Berkeley’s JCC East Bay with alto saxophonist Kasey Knudsen, keyboardist Michael Coleman, electric guitarist Andrew Conklin, drummer Hamir Atwal, and Jon Arkin (best known as an intrepid drummer) on laptop and live electronics. A rumination of musical ideas and relationships from his past, it’s a piece about memory and relationships and accounting for the past.

Far too many jazz tribute concerts are baldly commercial endeavors seeking to trade on the popularity of departed legends. If more were idiosyncratic labors of love like alto saxophonist Owen Broder’s Hodges & Duke, well, the scene would be a whole lot more fun. Last in town with the fantastic combo Cowboys and Frenchman, he returns to the Bay Area to perform with Israeli reed star Anat Cohen’s Tentet. While he’s here Broder takes the opportunity to present Hodges & Duke, a project celebrating the 60th anniversary of Back to Back and Side to Side (both on Verve), two wonderfully intimate small group albums featuring Duke Ellington with alto saxophone genius Johnny Hodges, an essential member of the Ellington Orchestra for some 40 years. Broder performs May 21–22 at San Francisco’s Black Cat and May 23 at San Jose’s Café Stritch with bassist Tal Mashiach and drummer Anthony Pinciotti (fellow Anat Cohen Tentet bandmates), trumpeter Josh Reed and pianist Dahveed Behroozi.

A Coltrane Family Reunion at the SFJAZZ Center

NEA Jazz Masters Tribute at SFJAZZ Is a Delayed Triumph