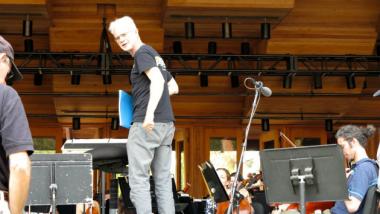 John and Samuel Adams, Together

One of the great joys of attending the first two nights of the three-weekend Britt Classical Festival in Jacksonville, OR, was the opportunity to experience, on August 1, back-to-back evening performances of pieces by Samuel Adams, 29, and his father, John Adams, 68. While both men’s works have been performed in the Bay Area by multiple organizations, including the San Francisco Symphony and the Berkeley Symphony Orchestra, this was the first time that their works appeared on the same program with both in attendance.

John and Sam arrived in time for Saturday morning’s final “dress rehearsal” of their pieces. Given the triple-digit weather, whose oppressiveness was compounded by stagnant air filled with smoke from a fire some distance away, most everyone was dressed down, with many players wearing shorts.

The rehearsal began with Sam’s 6+ minute Radial Play (2014), commissioned by the National Youth Orchestra of America, a program of Carnegie Hall. Then came John’s recent commission for the San Francisco Symphony and the St. Lawrence String Quartet, Absolute Jest (2010, rev. 2012). In this case, the Dover String Quartet, composed of four musicians whom conductor Teddy Abrams, 28, first met at Curtis, performed with the Britt Festival Orchestra. Just seven years after their formation, the Dovers' reputation is such that they will soon appear at [email protected],

Before the orchestra’s final run-through of Absolute Jest, John explained that its opening 400 measures – the first two of its six movements, and roughly 1/3 of the piece – were rewritten in their entirety after the premiere. This, he said, was to ensure that the orchestra would not drown out the solo quartet.

When conceiving the piece, he began with passages he loves from Beethoven’s String Quartets Op. 131 and 135, the Grosse Fugue, as well as what he calls “tattoos” from the Seventh and Ninth Symphonies and the opening chord progression of the Waldstein Piano Sonata.

“And then I put them through a John Adams machine,” he quipped.

Later in the evening, at a pre-concert talk anchored by Eric Teel, Director of FM Program Services at Jefferson Public Radio, John elaborated on his compositional process. “Starting a piece is very much like Magellan taking off and knowing there’s something out there, but isn’t exactly sure what. It might be a continent. It might be some sea monsters. It might be Donald Trump.” — John Adams

“Starting a piece is very much like Magellan taking off and knowing there’s something out there, but isn’t exactly sure what,” he said. “It might be a continent. It might be some sea monsters. It might be Donald Trump.

“Often, I don’t know where I’m going. I started writing thinking I was writing one piece. After it was premiered, as I listened as it toured and played at Carnegie Hall, I was not satisfied. I was kind of in agony. But I really thought the idea of the piece was worth saving, and that it was a really good piece that just didn’t start right.

“So I did something radical; I threw away the first 400 bars, which was two months of work. I did so much to Michael Tilson Thomas’ horror, because he had worked so hard to learn the score.

“When San Francisco Symphony brought it back a year later [and recorded it live, for imminent release on a high-resolution disc that also includes John’s much earlier S.F. Symphony commission, Grand Pianola Music], I had a completely different piece. I’m so glad I did. I know I did the right thing, and I’m pleased with it.”

Before the orchestra performed that evening, he elaborated further:

“I think there’s a long tradition of composers being obsessed with other composers’ pieces. Bach stole, or rather made arrangements of Vivaldi, and Beethoven of Mozart, and Liszt of Beethoven. In the 20th century, Benjamin Britten in The Young Person’s Guide to the Orchestra took a tune from his favorite English composer, Purcell, and made a piece out of it. Stravinsky did this with Tchaikovsky’s music. And in his ballet, Pulcinella, he took very familiar Neapolitan music and [made it his own].

“It isn’t enough to just hear the piece or play it through or conduct it; you love it so much that you have to incorporate it into your own creation. The minute you hear Beethoven’s scherzos, you’ll understand how fabulous the energy is. It has such vitality and vividness that I wanted to take it. My music has a very strong sense of pulsation and energy. To be able to identify that same quality in Beethoven and then put it through my own compositional mill was really a treat.

“When I was asked to write a piece for San Francisco, I wanted to take little fragments from some of the scherzos to these late quartets and, as it were, put them through a Hall of Mirrors – I’ll use a word that Sam uses – to make them into fractals, little tiny fragments, and then put them through my own compositional machine that gives them, so to speak, my own DNA.

“In the piece, the quartet plays these Beethoven fragments, but suddenly they’re in the wrong key, or they’re moved around or turned upside down, and the orchestra comments on it all. What we end up with is the world’s most crazy manic scherzo that goes on for 25 minutes with one short quiet thing in the middle.”

“It’s very disturbing to have these wonderful players and only to be able to see two of them,” he acknowledged. “Hence, for this performance, I made the radical proposition that the quartet should sit literally behind the conductor’s back. The Dovers are so incredibly talented and young that they had no idea how incredibly difficult that can be. We have a little video monitor that is helping [them see what the conductor is doing]. When I saw it this morning for the first time, I felt that we had finally got it right. It’s a great triumph.”

Needless to say, the new positioning, which San Francisco has yet to experience, also works to the composition’s advantage. Because it moves the quartet closer to the audience, and creates a space between them and the orchestra, their solo part is more clearly delineated from the orchestral fabric.

After the morning rehearsal, I had an opportunity to speak with both father and son. Unfortunately, in what could be considered the critic’s equivalent of a wardrobe malfunction, my digital recorder pulled a fast one, and decided to clam up. Hence, reconstruction is in order.

Early in the conversation, Sam said that one reason for the differences between his own, still evolving style and his father’s is that both men grew up listening to very different kinds of pop music. Before Sam began to compose, he spent years as a jazz bassist. His life, he lamented, was defined by quarter notes. Hence his work to date reflects, not only the influence of late 20th and early 21st century pop music, but also a desire to break out of his previous foursquare mold.

Sam, who only uses his middle name, Carl, on his website to differentiate himself from another Adams whose website address is samueladams.com, does not yet feel that he has fully found his voice. Assuming he sticks with composing, he wants to see how it all turns out.

He also acknowledged that, when he first began composing, he wondered if people were interested in performing his work because of its value per se, or because it was written by the son of John Adams. Quite early in the game, he realized that there was no point spending time dwelling on such concerns. Since he had only so much energy, it was best to expend it composing rather than worrying about what he could not control.

If father John has found his voice, it is one that often confounds simplistic prognostication. Take for example, the succession of his two most recent operas, the oft-jarring Dr. Atomic and the almost Mozartian A Flowering Tree.

When asked what we might expect next, he said that some composers, and certainly many artists, find a style that audiences like that makes them commercially successful, and stick with it rather than continuing to develop and explore. He hopes to never become stuck in that way.

The main problem John is encountering nowadays is the time it takes to get things produced. As he composes his next opera, about which he preferred not to speak, he has discovered that his agent cannot find a single company that will commit to premiering it in less than five years’ time. He does not want to wait around until 2020 to see his next opera performed.

Sam commented that one difference between his work to date and his father’s is that John keeps writing for gargantuan ensembles, while he often writes for smaller groups. He pointed to his recent Shade Studies for piano and iPad, which Berkeley-based pianist Sarah Cahill premiered at the San Francisco Conservatory of Music earlier this year. Cahill also performed the piece at the SoundBox series “Their Own Devices,” which Sam curated. Coming next year from Sam is a solo piano work for Emanuel Ax, which premieres at the Tanglewood Music Festival.

If both Sam and John were influenced by the pop music they heard during their youth, John listens to far less music by others these days. His relationship to pop music has also become distinctly mixed, in that so much of it is a manufactured product designed for commodity’s sake.

“Probably the hardest thing probably for people writing classical music now is that we live in a society where pop music is this monster elephant in the room,” he told Teel. “It’s so big and so powerful. In many ways, it does express the zeitgeist of our time more succinctly and more vividly than what I do. But I still think there’s great value for the kind of music that I write.

“It came to me right after 9/11, when the country was so deeply traumatized, how deeply so many people needed to get in touch with the deepest parts of themselves. They said they needed classical music, because somehow its statement and gravitas could fulfill the human experience at the deepest levels. I think that’s why we compose as we do, because we’re doing something that pop music can’t do.”