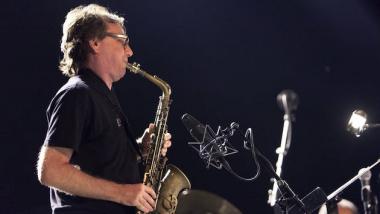 Calling John Zorn prolific is like describing the Pacific Ocean as vast, or Picasso as protean. It’s true as far as it goes, but it really doesn’t paint an accurate picture of the saxophonist’s scope as a creative force. Even when his Tzadik label releases several dozen CDs documenting his music over the course of a year, the blithely uncategorizable New York composer has zigged or zagged to yet another project, another body of tunes, another collaboration.

Monitoring his oeuvre from the Bay Area is particularly challenging, as he’s been a scarce presence on the West Coast for more than a decade. But that seems to be changing, as he’s found an amenable San Francisco home at The Chapel in recent months, performing several sold-out shows that paved the way for a typically Zornian outpouring on Sept. 1–4.

Billed as a celebration of his 65th birthday (Sept. 2), the festival features seven ticketed shows over the course of four nights encompassing at least 15 different musical configurations. Much of the music has only been documented in the past few years and has never been performed in the Bay Area. The program doesn’t just reflect his divergent array of musical strategies, encompassing free improvisation, through-composed chamber music, pummeling jazz/rock fusion and acoustic chamber settings. Just as importantly, the festival embodies Zorn’s gift for manifesting musical community.

The idea for the birthday festival came up last month during Zorn’s sold-out Chapel shows with bassist Bill Laswell, said Fred Barnes, the manager of the indie venue. “He sent me this enormous program and said he was going to ask everyone and get back to me a few days later,” Barnes said. “I thought, okay, maybe, some of this will happen, but everyone said yes. I’m not sure there’s anyone else in the world who could do that in such a short period of time. And it’s grown from that point. We added the Sept. 3 concert with Laurie Anderson and Terry Riley after we announced the festival. She requested that she be part of it.”

The festival opens Saturday with two thematic triple bills. Focusing on his new body of tunes Bagatelles, the 8 p.m. show features Trigger (an improv power trio with guitarist Will Greene, bassist Simone Hanes, and drummer Aaron Edgcomb), a cello duo with Erik Friedlander and Michael Nicolas, and Bagatelles Quintet, which adds drummer Kenny Grohowski to the musicians from Zorn’s Masada Quartet with trumpeter Dave Douglas, bassist Greg Cohen, and drummer Kenny Wollesen. The performance marks the West Coast premiere of Bagatelles, “a group of pieces in the style of modern classical music, but vehicles for improvisation. Right in my zone,” said Friedlander, who’s been involved in Zorn’s music since the late 1980s.

“The Bagatelles are mostly one page, like the Masada tunes, and they’re interesting structures, much like Masada, but a completely different vocabulary. They’re meant to be played by anyone who can improvise and can cover the technical demands. They’re very strong, a great sound for two cellos. They also work really well for two guitars, and Julian Lage and Gyan Riley have been playing them, too.”

Saturday’s 10 p.m. show features three ensembles drawing from the three books of Zorn’s famously Hebraic Masada, a body of work he started introducing in the early 90s and ended up expanding to 613 pieces (which not coincidentally is the traditional number of mitzvahs, or commandments, detailed in the Torah). In a rare reunion, Zorn performs with Masada Quartet, and conducts the Masada String Trio with Friedlander, violinist Mark Feldman and bassist Greg Cohen, who are focusing on pieces from second Masada installment, Book of Angeles. Argentine-born vocalist Sofia Rei and French multi-instrumentalist JC Maillard present the West Coast premiere of pieces from the third Masada installment, The Book of Beri’ah, songs recorded on the Tzadik CD Keter.

For fans who know the organist for his groove-laden work in the trio Medeski Martin & Wood, Simulacrum is a walk on the wild side, “a heavy-metal organ trio that plays beautiful atonal melodies,” Medeski said. “It’s very composed, but as he often does, Zorn leave places for us to improvise and solo. It’s almost a post-[Tony Williams] Lifetime sound, very creative and amazing with that kind of heaviness, more than pop or rock music. He’s got a way of writing for us that pushes us. He hears things in all these different players, and that inspires him to come up with something we wouldn’t. That’s what Mingus and Ellington did, wrote for their bands. It’s inspiring and fun, and I get to play with all these great musicians.”

The Simulacrum/free improv show is also a benefit for The Stone, the concert space Zorn founded and ran in the East Village from 2005 until it relocated to a ground floor venue at The New School in February. The old Stone depended on regular fundraisers to keep it going, but the stability of the new situation means Zorn will only be doing occasional benefits. “There are still expenses in keeping the space going and the concerts help offset that,” he wrote in an email. “It’s also a nice community event to keep the spirit alive.”

Though he’s often presented a truculent face to the media, Zorn is the thrumming hub of an international web of artists. Tzadik documents many of these filaments, but The Stone has turned into an invaluable forum that encourages artists to take a multifarious page out of Zorn’s creative methodology. The six-night engagements (now slimmed down to five at the New School) usually featured an artist presenting two distinct ensembles playing different music every night.

Friedlander has done four or five Stone residencies over the years, with his next one coming up on Oct. 9–13, an extremely demanding challenge that he’s been happy to embrace. “The Village Vanguard and the Jazz Standard are not breaking down my door,” he noted. “The Stone gives me a chance to play a full week — well now Tuesday through Saturday — and experiment with players. It’s a great place to try music out. It used to be a Herculean undertaking. John wanted six or seven nights, two different groups, so 12 bands needed to be rehearsed. He asks a lot of himself, and it was a good experience asking a lot of myself to see what I could do.”

So how to make sense of all this different music emanating from one angsty individual?

“I think people make so much of Zorn composing in different genres, punk rock to smooth jazz and the Jewish thing, the noise thing to film scoring. They see those as very different,” said Marsella, who last performed in the Bay Area with the band Yemen Blues. “Regardless of genre, as a composer, he’s thinking from a classical perspective. The genre and mode are not the important things. His interest in free jazz and punk rock was the intensity, but in terms of composition, he’s always a classical composer.”

The musicians flawlessly played the composer’s complete string quartets — though sometimes the performance was more procedural than passionate.