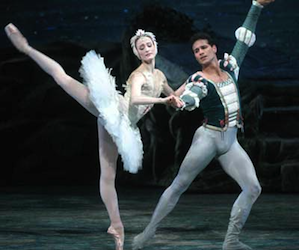 Company class at Ballet San Jose was sweeping into those final moments when dancers are ready to fly. Women in pointe shoes taxied forward, leaping across the studio floor, then whirling through the 32-fouette passage from Tchaikovsky’s Swan Lake. The men followed, spinning in grandes pirouettes, one leg out to the side. José Manuel Carreño, the company’s new artistic director and no slouch at grandes pirouettes himself (you can see him on YouTube, of course), watched from a chair in front of the mirrored wall, rising to murmur in Spanish to a new man from Cuba who fell out of a turn.

By this day in September the Cuban-born Carreño, who said he thinks of himself as a New Yorker after spending 18 years there dancing with American Ballet Theatre, had been living in San Jose for three weeks.

Carreño’s the first official artistic director since Dennis Nahat was fired from BSJ and ABT’s organization was brought in, largely with funds donated by electronics store tycoon John Fry, under the temporary artistic advisorship of Wes Chapman, a former ABT principal dancer. The Ballet San Jose School was also shaken up. Its longtime artistic director Lise la Cour, a Nahat associate, was replaced by Dalia Rawson and the ABT training curriculum was instituted.

The company added a few pieces from the ABT repertoire and also brought in a few ABT men to partner leading female dancers, particularly BSJ’s principal ballerina, Alexsandra Meijer, Fry’s romantic partner. One of them was Carreño. 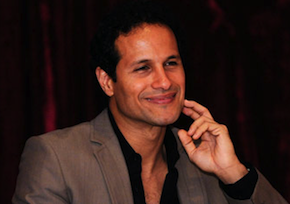 Long a crowd favorite at ABT by dint of his talent, honed under the tutelage of Alicia Alonso at Ballet Nacional de Cuba and at England’s Royal Ballet School, his command of the full-length classics that are a staple of ABT’s repertory, and his appeal — he was and is still a very good-looking fellow — Carreño struck a responsive chord partnering Meijer, and then Junna Ige, in the full-length Don Quixote.

After company class, the BSJ dancers split up for rehearsals of new repertoire that will premiere during the company’s 2014 season, following December’s Nutcracker. Former Paul Taylor dancer Richard Chen See was in the studio, teaching the big piece on program 2, the 1997 Piazzola Caldera, modern choreographer Taylor’s virtuosic take on tango, set to the music of Astor Piazzola. 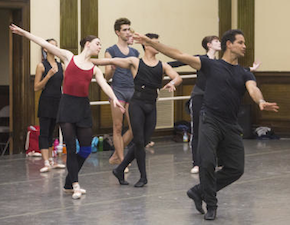 Carreño headed down to a smaller studio, where David Fonnegra was teaching a 1976 Vicente Nebrada pas de deux, Nuestros Valses, to the exquisite Nutnaree Pipit Suksun (she goes by her Thai nickname, Ommi), for eight years a San Francisco Ballet dancer, joined BSJ in 2012 as a soloist. This year she joins Meijer as a principal ballerina. Ballet San Jose dancer Rudy Candia is a soloist.

“I love this process,” Carreño said, watching from the front of the room as the trio consulted the video and began again. “It begins with struggles, then you get that momentum and everything flows.”

Carreño’s fiancée, ABT soloist Melanie Hamrick, is also on hand. She’s here for the weekend; other weekends, Carreño flies to her side in New York. But after a globe-girdling career of guest engagements and running his own summer training program in Sarasota, Florida, he’s planning to stick close to San Jose this year, “about 200 percent of the time” he joked, to get the company going in the direction he wants.

That roadmap could prove quite interesting. Carreño described Ballet San Jose as an ABT farm team, utilizing its training, its teachers and some of its repertory. He’s also enthusiastic about BSJ’s value as a regional ballet troupe that can do audience-building by reaching out to the Latino community as well as to the techies of Silicon Valley. Holding up an advertising card for The Nutcracker, Carreño said he’d like to see one side of it written in Spanish, the other in English. He wants to develop local Hispanic talent by expanding the Ballet San Jose School and its outreach programs, and by finding a permanent headquarters for the troupe as well as dormitory space for the school, which would also grow it as a revenue stream.

That roadmap could prove quite interesting ... Carreño is enthusiastic about BSJ’s value as a regional ballet troupe that can do audience-building by reaching out to the Latino community as well as to the techies of Silicon Valley.

Ah, but how to pay for everything? How deep are John Fry’s pockets? “We owe John Fry a lot,” he said with a laugh. “One of my missions is, I hope to find not just one John Fry, but many John Frys.”

Unbidden, Carreno mentioned Dennis Nahat, co-founder, with Ernie Horvath, of Ballet San Jose. Nahat also danced for American Ballet Theatre, albeit in an earlier era than Carreño. Nahat came back to San Jose in October with Yulan, a multimedia extravaganza from China, starring the Dailin Acrobatic Company at the California Theatre. The troupe is set to return in December with a holiday offering, The Terracotta Warrior. Carreño’s never had contact with Nahat, he said, adding that he’d be happy to meet him. “Even if I have a different vision of what it is, the company was and still is local, and a lot of the choreography, 70 to 80 percent of it, is by Dennis.”

That proportion is likely to change. After a fundraising gala Nov. 16 — featuring friends and colleagues from San Francisco Ballet, ABT, NYCB, Boston Ballet, and the Royal Ballet — and December’s The Nutcracker, choreographed by Karen Gabay, the company will present three more programs February to May at the San Jose Center for the Performing Arts.

The first, Feb. 14-16, opens with George Balanchine’s 1949 Serenade. For those who set store by symbolism, this was Balanchine’s first ballet as artistic director of the company that became the New York City Ballet. Serenade shares the bill with Finnish dancemaker Jorma Elo’s Glow-Stop, which BSJ premiered last season, and a new addition to the repertory, Israeli choreographer Ohad Naharin’s popular Minus Sixteen.

After that globe-hopping agenda, the next show, March 21-23, has four short pieces. Two, the Nebrada and Jorge Amarante’s Grapa Tango, are Latin; Infinity, by Israeli choreographer Igal Perry, is to Beethoven; and Evermore, by American choreographer and Alvin Ailey alumnus Dwight Rhoden, is to music by Nat King Cole. Taylor’s Piazzola Caldera is tango, writ large.

The third program, May 9-11, returns to things Latin, or Franco-Latin, with Roland Petit’s 1947 one-act story ballet Carmen, set to the Bizet score. It’s paired with something completely different — Twyla Tharp’s plotless, toe-shoes-and-sneakers In the Upper Room, an ABT smash-hit staple, to the music of Philip Glass. “I’m very into contemporary and neoclassical,” Carreño said, grinning. “I’m excited — I want to put on my flat shoes and start dancing again.” With just 36 “pretty young” dancers — one is on maternity leave, and, Carreño said with refreshing if heartless candor, the company “got rid of” seven others, whom he described as “kind of old” —this repertory is a good fit. He wants to add full-length ballets, but he wants to be very selective, he said, and he has to find “a couple of John Frys” to grow the company to 45 or 50.

“I’m very into contemporary and neoclassical,” Carreño said, grinning. “I’m excited — I want to put on my flat shoes and start dancing again.”

Ballet San Jose can hold its own as an alternative to the San Francisco Ballet, Carreño said, just as ABT and the New York City Ballet at times share audiences and at other times compete for them. He doesn’t want BSJ to become a Balanchine-based company, since SFB already is, nor does he want to develop a specialized repertory. He wants the dancers to be versatile, to be able to execute the wide spectrum of choreographies that are out there or coming down the pike. 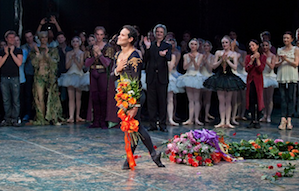 And he wants the company to travel, to Los Angeles and Orange County and even to San Francisco. And to New York; it would help grow the Ballet San Jose brand as well as season the dancers, he said. If he can’t afford to take the whole company at first, he’ll take some of it.

At the San Jose headquarters, the daily company class is free. Though attendance is voluntary, Carreño’s heartened to see that the dancers are for the most part showing up. He sees “who takes class and who doesn’t,” both by watching class and by watching rehearsals. “You’ve got to stay in shape,” he said. “When I miss class, I can feel it and see it. When you take class every day, you can see the difference. It makes dancing even easier, and it’s fun and it’s pleasant.”

He showed a visitor the video, complete with scary shark, that he shot while scuba diving in the crystalline waters off Cuba, where his parents still live. He’s on good terms with Alonso, 92, and returns a couple of times a year. He also brought 65 dancers from ABT and the New York City Ballet to Havana for last year’s International Ballet Festival; he wants to go again to the next one, next year.

Describing his management style, Carreño said, “I don’t go on and on pompously, and I don’t try to supervise dancers’ lives — unless they’re gaining weight.” But at the moment, he said, “Everyone looks very good. Very good.”