Bluegrass is an idiom that thrives on velocity, but after some 20 months off the road even the greatest players are retooling their pandemic-dulled chops. For the elite cadre of musicians who pioneered the newgrass movement in the 1970s and ’80s getting back to speed also means contending with bodies that are no longer as limber and resilient.

“For one thing, your back aches,” said 14-time Grammy Award-winning banjo star Béla Fleck. “It took a while to get my right hand back. But once I stand up, everything straightens up. For a long time, I sat down and I played better. It made it casual. But I’m finding out my back problems go away when I stand.”

Fleck will be hitting his stride when he arrives in California this weekend on a rigorous tour celebrating the release of My Bluegrass Heart (Renew Records/BMG), his first bluegrass album in 20 years and the third installment in a trilogy dating back to 1988’s Drive and 1999’s The Bluegrass Sessions. Like the two previous projects, My Bluegrass Heart has been nominated for the best-bluegrass-album Grammy. 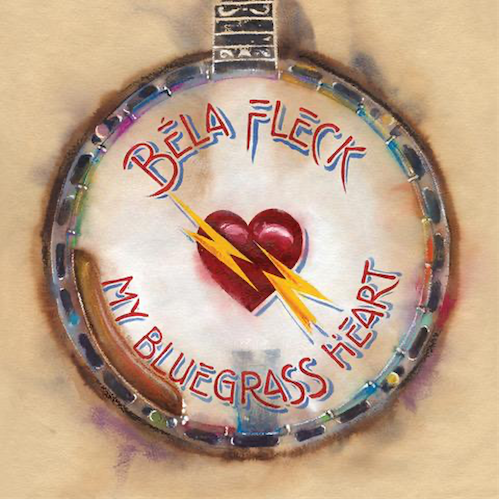 While the album is a multigenerational affair that includes tracks with young guns like Chris Thile, Molly Tuttle, Billy Strings, and Sierra Hull (who earned a Grammy nomination for her Fleck-produced 2016 album Weighted Mind), the Bluegrass Heart tour brings together a supergroup of seasoned masters, including mandolinist and fellow New Grass Revivalist Sam Bush, dobro expert Jerry Douglas, and fiddler Stuart Duncan.

“I was a little surprised to get Stuart as he’s about to go out with Allison Krauss and Robert Plant,” said Fleck, whose sprint across California with the Bluegrass Heart tour includes Berkeley’s UC Theatre on Dec. 12, Carmel’s Sunset Center on Dec. 13, Santa Barbara’s Arlington Theatre on Dec. 15, San Diego’s Balboa Theatre on Dec. 16, and The Theater at Ace Hotel in Los Angeles on Dec. 17. See the full roster of tour dates here.

“We’re old friends and we came up together, and even though Stuart’s a little younger than me it was a little awkward to ask him because he’s always so busy,” Fleck continued. “But he made it work. You know what they say, busy people know how to get the job done.”

At 48, the blazing guitarist Bryan Sutton is the youngest player on the tour, which is anchored by bass virtuoso Edgar Meyer. It was Meyer who first planted the seeds for this lineup with his 1986 debut album Unfolding, noted Sam Bush. “From there we played only a handful of live specialty gigs — at Nashville and the Telluride Bluegrass Festival,” Bush said. “All of us are too busy to actually rehearse together at the same time, much less form a touring band.”

For decades the only place to see these players together was their annual conclave in the Rockies, where they were affectionately dubbed The Telluride House Band. If Fleck was surprised at Duncan’s availability he was positively thrilled by Meyer’s commitment to the project.

“He actually likes the record,” Fleck said. “He doesn’t always like my records. And second, he loves the band. The only gig we ever do is Telluride, and I think he doesn’t want anyone else to take his spot. It’s been great. Edgar brings out something very unique. He provides so many colors and has such an original point of view.”

Fleck dedicated the album to bluegrass guitar great Tony Rice, a longtime collaborator who died last December, and pianist Chick Corea, with whom Fleck earned a Latin Grammy for their exquisite 2007 duo album The Enchantment. Before Corea’s death in February, Fleck let him know that the new album’s title was inspired by his 1976 album My Spanish Heart, a gesture Fleck says the pianist heartily endorsed.

While the touring band draws tunes from the album, they’re presenting a much wider repertoire designed to showcase each spectacular player. Rather than relying on pickups, they’re playing into microphones, which allows for much more dynamic control, while preserving more of the sound of the acoustic instruments.

“You have to really listen,” Fleck said. “Pickups have their place, but when you’re on mics it gets louder when you get closer and softer when you move farther away. This tour we’re all using in-ear monitors and nice studio mics so we’re hearing each other like crazy, a beautiful acoustic sound.”

For My Bluegrass Heart, Fleck approached the project like a director, “casting the right player for the right song,” he said. “I knew I had Thile and Billy Strings together, and needed something that pushes them. For the band that’s on tour, I knew I could rely on Sam Bush’s mando chop. We have the opportunity to do some funkier things with slower beats. We’ll do some up-tempo stuff. But there is a speed limit with this age, which is fine.

The way I play with Edgar Meyer and Zakir Hussain or the Flecktones is much more flexible and gentle. It’s a very different thing.”

Fleck has spent his career seeking out different things, from his uncategorizable Flecktones to his recent collaboration with the Blind Boys of Alabama on Nina Simone’s “I Wish I Knew How It Would Feel to Be Free,” which garnered a Grammy nomination for best American Roots Performance. That inveterate curiosity has taken him to Africa, where he sought out the origins of his instrument and recorded with artists across the continent (a journey documented on 2009’s Tales from the Acoustic Planet, Vol. 3: Africa Sessions).

He discovered bluegrass as a teenager and inspired by pioneers Lester Flatt and Earl Scruggs he quickly gained attention through his rapid mastery of the banjo. Joining the already revolutionary band New Grass Revival in 1981 he attained legendary status while still in his twenties.

Indeed, by age 26 Fleck had won five consecutive “Best Banjoist” awards in FRETS magazine readers’ polls, so the publication essentially retired his number. But Fleck was restless and searching for new musical challenges. He started trying to play modern jazz on the banjo, learning Charlie Parker and Chick Corea solos. He’s always quick to point out that leading bluegrass pickers had been incorporating elements of jazz for decades.

“Even Earl Scruggs would do some funky, jazzy stuff, like ‘Farewell Blues,’ which was a jazz tune,” he said. “Then Bill Keith came along and he had all these jazz chords, then Tony Trischka took it to Planet Z and I was a recipient of everything they had done to that point.”

Like just about everyone else, his wandering ways suddenly came to a halt in March 2020. He spent much of the pandemic playing duets with his wife, banjo great Abigail Washburn, and taking care of their two kids, a lockdown experience they shared on a series of videos recorded at home.

Sam Bush also started taping performances, inviting friends over to play in an effort to push back against the isolation and lack of musical stimulation. The old cats on the Bluegrass Heart tour might not play as fast as they used to, but reports from the road indicate that their sheer joy in each other’s company has fueled some epic performances (even if they’re icing their arms after the gigs).

“Live performance is my jam,” Bush said. “That’s what I love. The energy and communication between the musicians on stage with each other and the audience is a collaboration, a circle of give-and-take like no other. We’re so happy to be back on the road.”

From bluegrass to Bach to his own bottomless fount of originals, the mandolin virtuoso does it all.

The annual festival is a load of fun, despite persistent over-amplification.

The power trio braids strands of music, history, sociology, and culture into a spiritual whole that transcends easy categories.

Tim Weed Carves Out His Own Niche With the Classical Banjo

The five-string virtuoso talks about his new recording with the Prague Metropolitan Orchestra.

iPalpiti Returns to Live Performances in a Heartbeat