Being an intrepid traveler and ardent music lover — I’ve covered music, dance, and arts festivals from such disparate places as Abu Dhabi and Buenos Aires to Havana, Valencia, and St. Petersburg — how could I resist the offer to take a Jazz Night Express train from Rotterdam to Berlin? Organized by Chris Engelsman, who lived alongside the Nord West Express railroad as a youth and who currently works for the regional transport authority in Amsterdam, the trip was to be the first in what in what Engelsman hopes will be many more to come.

With the night train having taken its final journey from Amsterdam to Berlin at the end of 2016, this trip was one way to combat those short plane flights, which, though cheaper and faster, were decidedly bad for the environment. And so it was that I found myself on Platform 9 at Rotterdam’s geometrically shaped Centraal Station, where the 13-car train chugged up the tracks to take us on a 12-hour ride to Berlin. In addition to leaving a lighter carbon footprint, I would be bingeing on music, food, and drinks along the way.

Indeed, I had been assigned to “Luxury Sleeper Car” 13 (only Car One and mine were dubbed “Luxury,” while seven others — “Couchettes cars” — or railway carriages, featured non- or semiprivate sleeping accommodations). In any case, I needed help finding my carriage, which, I soon discovered, was not exactly Orient Express-like.

Still, the night was young, and after settling in I was greeted by a couple — freelance journalists from Britain, who would be sharing the car with me — not that I was expecting to get much sleep. The train was also old-school: There was no Wi-Fi, no air-conditioning, the windows were streaked, and it was packed to the tune of 350, well, hipsters, expecting to party until arriving in Berlin at 7:30 the next morning.

Our first stop, though, was Amsterdam, where a number of folks boarded, and where my thoughts turned to movies featuring trains. I immediately conjured Hitchcock’s 1951 flick, Strangers on a Train, starring Robert Walker as a psychotic killer and Farley Granger as a professional tennis player, making me uneasy when the male half of the couple entered our car carrying a — gulp — Fred Perry tennis bag. I also imagined Billy Wilder’s Some Like It Hot, the flick where Tony Curtis and Jack Lemmon impersonate female jazz musicians in a band featuring Marilyn Monroe as the sexy chanteuse. This, obviously, was a stretch, as there were no signs of drag-queen musicians on this particular joyride. Finally, being overly dramatic myself, I couldn’t help but recall Garbo in Anna Karenina, the Clarence Brown-directed film based on the Tolstoy novel in which [spoiler alert] our heroine throws herself onto the train tracks in the dead of winter.

Needing to banish such thoughts from my mind, I made my way to the bar and ordered a red wine before heading to the Bird Stage, also known as Car 12, where Ntjam Rosie was performing. A Rotterdam-based jazz singer/songwriter with roots in Cameroon, she’d won the Music Matters Award in 2009, gaining her the title of music ambassador in Rotterdam the following year. Rosie, who has also been a presence at the North Sea Jazz Festival, which recently celebrated its 14th season, was backed by Bart Wirtz on alto sax, Koko Lawson on percussion, and Ruben Croes on guitar.

Alas, it was standing room only, and I could barely make out the sounds that were a mix of pop, jazz, and soul. This was not quite what I was expecting, as I’d been assured of having a reserved seat. Was Rosie belting out some of the hits from her six albums, including “Space of You” and “Morning Glow” from Elle (2010) or “Forever Love” and “Dear to Me,” from her 2015 recording, The One?

Honestly, I couldn’t say. What little I did hear — honeyed tones, a cool delivery reminiscent of Sade, and some terrific, albeit muffled, backing — sounded smooth, but the stifling conditions made for some rather difficult listening.

“Not to worry,” I thought, as there was plenty more music on the menu, including a set by the Thijs Nissen Trio, featuring Donald Simoen on alto sax. With Mitchell Domen on drums and Tomek von Leeuwen on double bass, the group, fronted by Nissen, also a fine alto sax player in the mode of Charlie Parker, would be serving up a bunch of swinging tunes from the Great American Songbook in the Bistro, or Car Seven. Unfortunately, due once again to massive overcrowding, I was unable to get close enough to actually hear the group’s cool riffs, although I do believe I caught a whiff of “Autumn Leaves.”

That aside, it was time to check in at the restaurant (Car Six), where I had a reservation and would be dining on the Sol Kitchen/Sonny Cheffing-prepared food with my sleeper-car folks. After a bit of a delay, the three of us were seated and then joined by Dutch jazz singer Mathilde Santing, who told us that she’d been “relatively famous” back in the day and was on the verge of releasing a new album, Troublemaker. Unable to Google her at that point, I later learned that Santing was known for her coolly dispassionate takes on the works of singer-songwriters rarely covered by female crooners, including Randy Newman, who once described her 1993 album Texas Girl and Pretty Boy as “some of the very best recordings I know of my work.”

And then the food — an excellent three-course meal of steak tartare, crayfish tails with avocado mousse, soft-cooked beef bavette, cream of corn, and a dessert of panna cotta with caramelized pineapple, kumquat, and meringue — began arriving. I felt a lot better and was once again ready for some live jazz, hoping the experience  wouldn’t be more acoustic music sets I was unable to hear.

Ever the optimist, though, I got wind of the Trio Jesse van Ruller, which was gigging on the Diesel Stage (Car Two), with the namesake rocking on guitar, Thomas Pol on double bass, and Joost Patocka on drums. The long walk through the raving, overheated masses  foiled my plan again: The trio was just finishing what I’d been told had been an “awesome” performance, one in which I’d missed their take on lyrical ballads, especially a Sonny Rollins-inspired interpretation of “My Funny Valentine.”

Undaunted, I decided to try my luck with Dorona Alberti, the longtime singer with Gare du Nord, which, in 2007, had released Sex ’n’ Jazz, the best-selling Dutch jazz album of all time. Alberti, accompanied only by pianist Sander de Bie, would be performing excerpts from her solo show, “Käsebrot” (Wine and cheese) on the Bird Stage, closing out the live portion of the evening, after which DJ Maestro would be spinning tunes well into the wee hours.

Needless to say, I missed Alberti, but did manage to wander into Dutch schrijver (author) Arnon Grunberg’s neosalon, where literary patrons were grilling him on aspects of his many books. Of course, they were all speaking Dutch, so when the microphone was handed to me, I politely excused myself, and seeing it was late, returned to my cabin, where my bed, the bottom of three bunks, had been turned down.

Understanding that this journey would certainly qualify as sui generis, I was grateful when we arrived at the Berlin Zoo train station a few hours later. My plan was to visit a good friend, composer/pianist Craig Urquhart, who had been Leonard Bernstein’s assistant for the last five years of the great man’s life and is now a senior consultant for press and promotion at the Leonard Bernstein Office.

Michigan-born Urquhart had moved to Berlin from New York several years ago, bringing with him his 1986, Austrian-made Bösendorfer grand piano, which was originally Bernstein’s piano in Vienna and had been signed not once, but twice, by the maestro himself. Living in the attractive Charlottenburg neighborhood, a hub for cafes and jazz clubs, including the fabled A-Trane, Urquhart welcomed me to the splendid 19th-century apartment he shares with his husband, no matter that it was extremely early on a Saturday morning.

Urquhart, whose music can be found in a wide variety of productions, including on film scores, also wrote the music to my lyrics for our song, “Love Is Leonardo.” This ditty, which earned me membership in ASCAP, can be found in sheet music form in my book, Leonardo: Up Close and Personal, a biography of film star Leonardo DiCaprio that was published by Ballantine Books to coincide with the release of the blockbuster film, Titanic.

That said, Urquhart’s more notable musical achievements include composing art songs: His album Secret and Divine Signs, featuring tenor Michael Slattery, received Five Star ratings from the BBC Music Magazine and The Classic FM Magazine. Most recently, though, Urquhart released his 11th CD, Affirmation, a recording about love, loss, friendship, and positive energy, with The New Yorker’s Adam Gopnik writing, “When we listen to a piece as beautiful as Craig Urquhart’s ‘Remembering Lenny’ [Bernstein], what we hear is the musical articulation of Bernstein’s deepest values.” 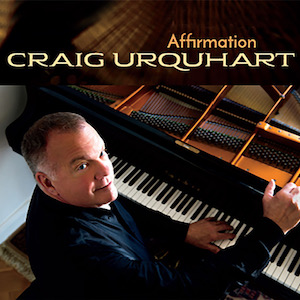 What a treat it was for me, then, to have Urquhart sit at the piano and play some of the music from Affirmation. As the songs reverberated throughout the memorabilia-filled abode, I again understood why Bernstein had encouraged the young musician to follow his heart and write tonal music as opposed to big orchestral works (Urquhart had once written a symphonic work based on Stockhausen). It was, in a word, sublime.

So, too, was the walk around the neighborhood, where author Christopher Isherwood (I Am a Camera) once lived, as Urquhart and his husband took me on a minitour, including ambling through the Saturday market for fresh produce, fruits, and cheeses. Back at the apartment, Urquhart then prepared a delicious Salade Niçoise, as we toasted to music — and friendship — with glasses of chilled white wine.

It was then that I realized the train trip, now a memory, had been worth it. And though I may not have experienced the music in ways I would have liked (up close and personal from the confines of a chair), I did meet a lot of cool people, had some great food, and saw some of Europe’s bucolic countryside from the observation deck at the back of a speeding train. It also took me to Berlin, providing me a wonderful opportunity to reunite with a dear friend.

As the time ticked toward five o’clock, Urquhart put me in a cab to Tegel Airport, where I would be flying to Amsterdam instead of heading back to the city by rail. Ah, my bad, I know — and I do apologize for leaving another big carbon footprint — but this writer still had places to go, people to see, and stories to tell.

In a scene that will be repeated on a larger scale in San Francisco in October, the first of Lisa Bielawa’s "Airport Broadcasts" recently took place in Berlin. The participatory event united more than 200 instrumentalists of all kinds.

Letter from Bayreuth: Much to Think About in Vivid 2015 Productions

From the “rat” Lohengrin to the violence-saturated Ring, Bayreuth 2015 featured disturbing but provoking images along with a lot of musical highlights.