For the last four years, the Los Angeles Master Chorale, through its “Voices Within” educational outreach program, has overseen the creation of a series of original oratorios composed and performed by the exceedingly talented students of the Ramón C. Cortines School of Visual and Performing Arts.

Now, after six months of working side-by-side, 100 of the school’s music students, aided by faculty and visiting artists from the Master Chorale are about to unveil their latest creation. Their original oratorio, Frankenstein: Of Monsters and Men, will have its premiere in a pair of free-admission performances (noon Thursday and 7 p.m. Friday) on the stage of the school’s Main Theatre.

Serena Boutin is a 17-year-old senior and a seasoned veteran of the school’s choral arts program who has participated in the creation and performance of all four Master Chorale collaborations. She says she’s come a long way since her formative days as a freshman member of the school’s 80-member Mixed Choir. 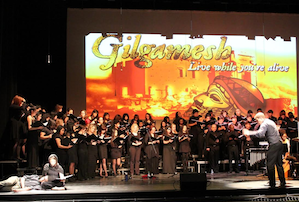 “That first oratorio was one of the biggest journey’s I’ve taken because it was my first year learning to sing in the choir and about the whole process of creating music,” Boutin recalls from her current vantage point as a member of school’s select Chamber Choir. “Working with my teachers and the members of the Master Chorale taught me a lot about how the songwriting process works. It’s not about competition. It’s about collaboration.”

According to Alice Kirwan Murray, of the Master Chorale’s educational outreach department, the “Voices Within” program was started over a decade ago, but was originally targeted at the elementary school level.

“An artistic team of a singer, a playwright/lyricist, and a composer/arranger would go to the classroom and do residencies to teach the students about basic collaborative skills,” she explains. “The prize at the end was that these groups of students would create original songs that they would perform with members of the Master Chorale. It was just in the last five years that we expanded the program to the new arts high school that opened just down the street from the Walt Disney Concert Hall, where the Master Chorale is in residence.”

“We wanted to get across what it’s like to for the Monster to be brought into a world where no one else is like you.” - music student Serena Boutin

Inspired by the skills of the students and the commitment of the school’s faculty, the decision was made to expand the dimensions of the Master Chorale’s project from the creation of few original songs to the composition of an entire oratorio.

According to choir teacher Desiree Fowler, “The school has 1,700 students divided into four academies: music, dance, theater, and visual arts. We opened five years ago and this is our fourth year working with the Master Chorale.”

As with any inner-city high school, Cortines attracts a student body that is exceedingly diverse. It is an element, according to Boutin, that the faculty and the students embrace.

“This school is all about diversity and acceptance,” she says with obvious pride. “When I hear what it’s like at other schools, it’s really shocking. We’ve never really had a bullying problem or a problem with racial profiling in general.”

It’s that perspective, Boutin says, that she and her fellow student collaborators wanted to bring to their incarnation of Frankenstein, seeing in Mary Shelley’s “monster,” the ultimate, misunderstood outsider.

“The story is very sad and disturbing to me,” Boutin explains. “We wanted to get across what it’s like to for the Monster to be brought into a world where no one else is like you. It was like trying to see the world through the eyes of a leper, to understand how that might feel and how that could be expressed in song. Also,” she adds, “it’s about how monstrous humans can be toward creatures that need their help. That’s what I personally wanted to bring out in the story. And I think we did a really good job with that. There are some points that make you want to cringe.”

Compositionally, Frankenstein: Of Monsters and Men was created by eight groups of students, each taking on a movement of the oratorio, with guidance and mentorship from Kirwan Murray, lyricist Doug Cooney, and composer Jonathan Beard, all of whom began this process during a three-day summer retreat last August.

“Doug instructs them in the basics of writing lyrics,” Kirwan Murray explains. “Jonathan gives them basic skills for composing, such as creating melodic lines and techniques you can use for building tension or expressing emotion. Then he does the final choral arrangement of the completed oratorio. For the performance we will have 100 students — the 80-member Mixed Choir and the 20 singers of the Chamber Choir, plus eight members of the Master Chorale that will anchor their sections and take on the more thorny vocal parts. There will also be several soloists taking on the roles of the Monster, Victor Frankenstein, Victor’s mother, and Mary Shelley.”

The task of creating and composing the opening movement/chapter fell to Boutin and the four other members of her well-seasoned team.

“My group was given the first movement, which is about how Mary Shelley got the idea to write Frankenstein, about what was going on politically at that time, and what prompted her to write the first psychological thriller. Then we began to write the lyrics and create motifs to reflect elements of the story.” Considering she’s a high school senior, it’s hard not to be impressed with the professional attitude Boutin has developed when it comes to the ups and downs of artistic collaboration.

“In the beginning of the process,” she says with wisdom that far exceeds her years, “you can’t be too emotionally attached to anything because you don’t know what’s going to be tossed out. At the same time,” she muses, “the idea you thought would never be used turns out to be the idea that’s chosen. There’s always room for compromise and everyone gets a chance to explain why they think their own idea will work. As you grow up, you learn to see the brilliance of other people’s ideas.” Frankenstein: Of Monsters and Men, 12 noon Thursday, Feb. 20, and 7 p.m. Friday, Feb. 21; Ramón C, Cortines School of Visual and Performing Arts, Main Theatre. 450 N. Grand Ave., Los Angeles, admission free. For reservations: www.LAMC.org/frankenstein.