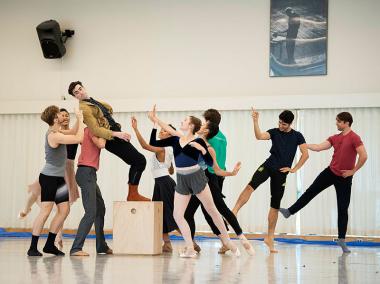 The Lives of Women: A Matter of Degree

Cathy Marston has choreographed tales about Lady Chatterley, Queen Victoria, Jane Eyre, Lolita, and, for the San Francisco Ballet, Snowblind (2018) based on Edith Wharton’s Ethan Frome. But her upcoming world premiere, March 24 at San Francisco Ballet marks a great leap forward, in time and topicality. [Editor’s note: SF Ballet’s Program 5 has been canceled, following ongoing concerns about the spread of the novel coronavirus in the Bay Area.]

Mrs. Robinson, based on the 1967 film The Graduate, which starred Dustin Hoffman and Anne Bancroft, was based, in turn, on a novella written in 1963 by Charles Webb. Fifty-three years later, the dramedy’s themes come to a ballet stage.

Significantly, Marston said, Mrs. Robinson doesn’t have a first name — in the novel, the film, or the ballet. “She’s called Mrs. Robinson.” She bears her husband’s last name, she lacks her own identity, and she’s never told her own stories, either. She feels trapped in a loveless marriage. She’s an alcoholic. Angry and helpless, she seduces the graduate, Benjamin, the comically naive 21-year-old son of her feckless husband’s business partner and a childhood playmate of her daughter Elaine (Katharine Ross in the film). With Benjamin, at least, she can find some power. Or can she?

While Marston was considering The Graduate for her next story ballet, she noticed that Betty Friedan’s classic, The Feminine Mystique, like Webb’s novella, was written in 1963. Friedan’s own research had, in parallel, unearthed many of Mrs. Robinson’s traits and woes.

Friedan posited that women were unfulfilled because they were expected to subordinate their own lives to those of their families. That in turn led to their diminution at work (if they found any), where they were often considered unqualified by dint of intellect, education, and training and, anyway, too busy with their foreordained tasks of childrearing, husband tending, and domestic chores to hold responsible jobs. From Friedan’s work grew the concept of second-wave feminism and the women’s-liberation movement. Friedan, an Ivy-educated progressive (radical, some said), a community activist, mother, and freelance writer, cofounded the National Organization for Women.

Webb, like screenwriters Buck Henry and Calder Willingham and director Mike Nichols, the guiding forces behind the movie, were still emerging from the Korean War era, and, Nichols told a New Yorker interviewer years ago, hadn’t figured out their lives — their values, their destinies—a dilemma that resonated with the youth of the Vietnam era in 1967. The movie, further buoyed by the music of Simon and Garfunkel, struck gold at the box office.

So out of these coincidences, salted, perhaps, by the British-born Marston’s own experiences as a woman trying for decades to succeed as a name choreographer — a quest, she said, that might take a man three years or four — grew her next ballet.

Born in 1975, Marston went to Cambridge and then spent two years at the Royal Ballet School, gravitating to choreography. She grew up in a family that valued literature; her parents were both English teachers. She spent five years as an associate artist at the Royal Opera House, where she created a ballet based on Henrik Ibsen’s Ghosts, and directed the Bern Ballet in Switzerland, for six years.

Marston combines Ben’s chasing of Mrs. Robinson’s daughter Elaine — beneath the bizarre shadow of her mother’s affair — and the unfulfilled lives of women, embodied by a corps de ballet of housewives, who one-by-one begin to rebel against their domestic chores. Marston wrote the scenario in collaboration with dramaturg Edward Kemp. The score was composed by Terry Davies, who also wrote the score for the movie Florence Foster Jenkins and the new Matthew Bourne film, Romeo and Juliet.

The ballet’s leads are triple-cast: Sarah van Patten and Joseph Walsh; Dores André and Lonnie Weeks, and Mathilde Froustey and Benjamin Fremantle. Marston set the ballet on the company during rehearsal period last summer. Van Patten was fresh off maternity leave and not yet able to dance at full power, which could have proven a challenge. “I knew I wanted to work with Sarah,” who had created the lead in Snowblind, “and those three guys.” So as Marston was setting the ballet, Froustey and André were able to dance full out, and van Patten was able to participate in the rehearsals as she eased back in. “It was really lovely to see the generosity among the dancers,” Marston said. Meanwhile, as she had in Snowblind, van Patten was able to find the tiny gestures that helped define her character, like when Mrs. Robinson picks a tiny piece of lint off Benjamin’s shirt, a move that “says everything about power.”

Character definition through the body is one of Marston’s strengths as a storytelling dance maker. Each Mrs. Robinson brings her own quality to the role, and Marston is able to recognize, capture and extend it. For example, Dores André, whose sphinxlike Mrs. Robinson bore a nigh-eerie resemblance in rehearsal to the great Anne Bancroft’s portrayal in the movie, has an attack-but-float quality that makes her “seem to fly,” said Marston, while Froustey’s “snaky, slinky” rotation of her body lets us see Mrs. Robinson’s multifaceted persona in full.

The goal, said Marston, is to get beneath the surface, and then to go even deeper. The Graduate movie is full of watery moments: Benjamin staring at his little bedroom aquarium, or floating on a raft atop the family swimming pool, or submerged way over his head in scuba gear. Metaphorically, the same goes for Mrs. Robinson. “Anne Bancroft is incredible in the film, but she’s like the water,” Marston said. “You want to find what’s underneath, but when you get underneath, you have to go deeper. Her vulnerability is like that.”

The movie’s moment of her peak vulnerability comes in the bedroom, when Elaine discovers her mother with Benjamin (Mrs. Robinson, having forbidden Benjamin to date Elaine, was the engine of the moment), screams, and runs away. In the next frame, we see only Mrs. Robinson, looking very small, very frightened, and seemingly boneless, like water. She’s pressed into a bare white corner, the walls rising above her. “Goodbye, Benjamin,” she says.

That could be a moment to discuss in the studio. In rehearsal, “We talk and laugh a lot. It’s not just dance, dance, dance,” Marston said. “Each individual scene, we read it back in the book, or watch, so we can talk about it,” and figure out where the scene is going, so it can be made to dance.

One of the satisfactions Marston said she draws from working with San Francisco Ballet Artistic Director Helgi Tomasson is the way he understands character. “The choreography is the character, in a way. The movement comes from the story.” Too, Marston’s relationship with the company and with Tomasson has continued to grow. “Having made one ballet, it’s very rewarding and satisfying to come back and just go straight in together.”

Before, “It was a problem with no name, and the women didn’t tell their stories,” Marston said. “Now it has a name.”

Paul Taylor’s dances are as timeless and moving as ever at the YBCA.

Hope Mohr and others celebrate the choreographer’s legacy with events at ODC.

A final tour highlights the exquisite skills of both the choreographer and her troupe.