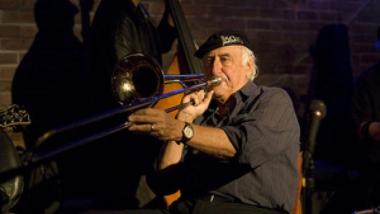 Mal Sharpe was a jazz man to his core, a quick-thinking, loose-limbed prankster who possessed a particularly potent gift for bringing people together, even when they were the butt of the joke. The obituaries following his death on March 10 at the age of 83 tended to focus on his pioneering comedy work with Jim Coyle, with whom he roamed the streets of San Francisco in the mid-1960s ambushing unsuspecting pedestrians with outrageous scenarios delivered with poker-faced confidence. Their Candid Camera-inspired radio and television pieces bent the man-on-the-street journalistic format into a pretzel. A seemingly reasonable scenario would quickly spiral into absurdity, and the duo was ready to keep twisting, eager to see just how far they could push the premise.

His seat-of-the-pants sensibility was part of Sharpe’s charm as a musician. A lively trombonist, DJ, and bandleader, he was dedicated to the traditional New Orleans style that thrived in San Francisco from the 1940s through the mid-1960s. At the helm of his ever-changeable and self-mockingly monikered Big Money in Jazz Band, Sharpe was a beloved Bay Area institution who held court for decades at Sausalito’s No Name Bar and North Beach spots like Enrico’s, Savoy Tivoli, and Fior d’Italia. Along with the great vocalist Barbara Dane, who still sounds great at 92, he was one of the last prominent links to a jazz era largely overshadowed by the advent of bebop after World War II.

Sharpe started the Big Money in Jazz Band in the 1980s, and stocked it with Watters and Murphy alumni like pianists Pete Clude and Wally Rose, clarinetist Bob Helm, and cornetist Leon Oakley (who’s still on the scene). Welcoming young and aspiring musicians into the fold, Sharpe turned Big Money into one of the region’s premiere proving grounds, offering invaluable bandstand experience amidst his steady stream of hilarious banter between tunes.

Drummer Pete Devine was 19 years old when he landed in the Bay Area in 1989, and had already started to make his mark playing ragtime and early jazz in the band Bo Grumpus. Quickly swept up in the Sharpe maelstrom, he got a trad education playing alongside the grizzled veterans, learning dozens and dozens of early standards.

“He was a bridge between the old timers and more modern jazz players,” says Devine, who’s best known these days for his work in the elemental blues combo HowellDevine. “I remember him calling himself the Grateful Dead of Dixieland jazz. He would throw together a mishmash of different musicians — trad players and modern cats like Roger Glenn and vocalist Kellye Gray — and somehow it always worked.”

An enthusiastic singer himself, Sharpe was particularly fond of vocalists, and Gray was one of many who performed regularly with the Big Money in Jazz Band. He often welcomed amateur and aspiring singers to sit in too, but over the years Sharpe featured world-class artists such as Gray, Faye Carol, Brenda Boykin, Roberta Donnay, Faith Winthrop, and Rhonda Benin. Benin started singing with Sharpe around 1992, about the same time Linda Tillery hired her as a founding member of the Cultural Heritage Choir, and she considers both gigs an essential part of her education.

She’d come out of the Los Angeles R&B scene, and “knew three jazz songs” when she started with Sharpe, Benin wrote on Facebook. “The steady gigs at The No Name Bar in Sausalito and Enrico’s in North Beach were my learning ground. I learned to work with a band, built a nice jazz repertoire, and the hardest thing: entertaining people. I ended up with a steady nine-year gig at Enrico’s and its sister club, The Downtown in Berkeley. I still work with the band at least once a month at Fior d’Italia in North Beach.”

Sharpe was hard to miss in a crowd. A shambling 6-foot-4-inches, he usually wore a sly grin that let you know he was in on the cosmic joke. He had various TV gigs over the years for both public and commercial television that made excellent use of his affability and humor, but many people knew him by his voice as a longtime Sunday disc jockey on KCSM with his show Back on Basin Street. Alisa Clancy, the station’s program director and host of A Morning Cup of Jazz, was the first producer to work with him at the station in the early 1990s, and he broadcast for the jazz station until 2012.

“We’d have guests and he’d paint scenarios about the day, like we were broadcasting from the blimp or whatever he’d happen to come up with,” recalls Clancy, whose husband, multi-instrumentalist and trad jazz specialist Clint Baker performed often with Sharpe. “I loved working without a net. Mal didn’t want to plan too much and I was perfectly okay with whatever he came up with. You wind him up and let him go. He was a consummate improviser across every platform.”

Clancy isn’t exaggerating. Sharpe added a jolt of anarchy to every occasion. About two decades ago he officiated at Clancy and Baker’s wedding at the Brazil Room in Berkeley’s Tilden Park “and he came dressed as a rabbi,” she says with a laugh. “We had a jazz wedding with all these musicians and a big jam session, but before that he gave us a test.”

Pulling out a fake book, a compendium of lead sheets musicians often carry on gigs so they can make their way through any unexpected tunes, “he’d sing the first line of some standard and we had to sing the next line,” Clancy says. “Clint made it through his first two and I made it through one, but I couldn’t do the second one. He closed the fake book and looking totally serious said, ‘Okay, the wedding is off!’ Some people were really confused at first. Nothing was off limits with Mal, but there was always this underlying kindness. In their man-on-the-street gags Coyle could be cutting. Mal was his good straight man.”

Available on the four-disc set These 2 Men Are Impostors, which includes their two Warner Bros. LPs The Absurd Imposters and The Insane (but Hilarious) Minds of Coyle & Sharpe, the groundbreaking comedy will probably be Sharpe’s most widely remembered legacy. Their comedic DNA is evident in countless acts and shows that rarely approach their wit and commitment to absurdity. 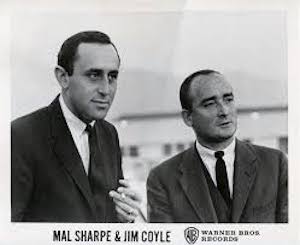 In one of my favorite bits, they pose as a radio interviewer (Sharpe) and a would-be employer (Coyle) looking to offer a job to a random San Franciscan. Coyle’s description of the gig, which entails standing in a fiery pit and retrieving objects tossed in by people who’ve bought tickets for the privilege, gets more and more hazardous. The interviewee sounds game, even when Coyle informs him that the previous person he hired had perished. Undaunted, the man says he understands that mistakes happen sometimes.

Coyle explains further that they’re trying to create a living hell, and four maniacs will be attempting to interfere with the job of throwing objects back. “Now wait a minute, you said four maniacs?” the man asks, starting to sound doubtful. “Have you worked with maniacs before?” Sharpe inquires, sounding blandly sincere. He didn’t know it yet, but that San Franciscan had a close encounter with two of the very best, and our world is a whole lot less interesting with the passing of the beautiful maniac Mal Sharpe.