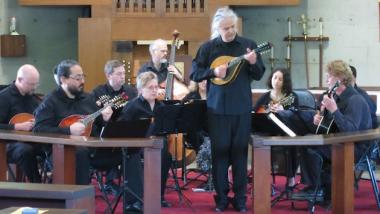 Mandolin Orchestras Are a Thing – And They Have Their Own S.F. Festival

“There are three special things about the mandolin,” announces Tony Phillips, in anticipation of the 16th Annual San Francisco Festival of the Mandolins, for which he’s on the organizing the committee, as well as the list of performers.

“One is that it’s a very friendly instrument, in that beginners can make enjoyable sounds,” Phillips continues. “Another is that it can play very different roles within a group. It can be melodic, harmonic, and rhythmic, almost taking the place of the drum. And the third thing is, it’s very adaptable to many different kinds of music. And that’s what we try to prove at the festival, by bringing in who we think are exemplary players from different genres of music, and putting them next to each other.”

The friendliness and diversity of the music will kick off at the Croatian American Cultural Center in San Francisco at 11 a.m. on Sunday, April 24. “Each year we start with what we call the Bring Your Own Mandolin Orchestra, or BYOMO,” notes Phillips. “And each year we try something new, so this year Achille Bocus [conductor of the S.F. Mandolin Orchestra] has done a mandolin arrangement of Mozart’s Symphony No. 29. The first hour of the festival will be a rehearsal of the symphony [with SFMO], and anybody who wants to can get up and join in. We’ve posted the music online, but for anybody who hasn’t studied in advance, we’ll have sheet music available for them.”

During the second hour, there’ll be workshops led by a couple of participating artists, one by the locally-based Miguel Govea, who features Mexican folk music, the other by Boston-based bluegrass player Joe Walsh. The concert itself begins at 1 p.m., with the Aurora Mandolin Orchestra.

“They go back way before the Second World War, when mandolin orchestras were really big, especially in San Francisco,” Phillips says about Aurora. “Most all the barbers in San Francisco were Italian, and they all played mandolin,” sometimes in their shops. “And they all got together on Sundays in these orchestras, for what you might call ‘light classical’ stuff. Last year at the festival, Aurora did a tango, a classical arrangement, and some Italian-oriented pieces. They’re getting better every year.”

Next up will be Govea’s family group, followed by the Gravenstein Mandolin Ensemble, whose name signals its base in Sonoma County and who’s repertoire “is again in the light classical tradition, but more diverse. They’ve been known to do arrangements of Beatles tunes, and American standards.

Phillips himself will appear in the next slot with the Mandorian Candidates, a trio of mandolin, octave mandolin, and guitar. “When we formed the group,” he says, “our goal was to play a tune from every country. So we have stuff from Lichtenstein, a Klezmer tune, an Italian tune, and a pop standard, Cole Porter’s ‘Begin the Beguine’. We’re hard to pin down.

“Then we’ll close out with the performance of the Mozart symphony” which had been rehearsed at the festival’s beginning. And we want anyone who’s a mandolin player to have participated in this. Nobody’ll be in the spotlight, and nobody’s taking a solo.”

Phillips has found that many participants have come to the mandolin from violin or guitar. “The mandolin has features of both of those other instruments,” he explains. “It’s tuned like a violin, in fifths, so it’s very approachable musically. And a lot of guitarists have had exposure to the use of a flat pick. Also, like the violin, the mandolin is in the range of the human voice, so melodies come out naturally, but it’s easier to play because there are frets, and it’s easier to deal with a flat pick than a bow. Kids can play it, and yet in the hands of virtuosic players, like Chris Thile and Mike Marshall and Avi Avital, it’s on a par with any classical virtuosi.”

Dana Rath, who co-founded the Modern Mandolin Quartet in 1985 with Marshall, first discovered the instrument while studying in the classical guitar department at Loyola University.

At the time of our interview, Rath was preparing for a collaboration with the Silicon Valley Symphony on Nino Rota’s film score for The Godfather. He’s also performed Vivaldi’s Double Mandolin Concerto, with the Berkeley Symphony, and will appear at this fall’s convention of the Classical Mandolin Society with the Modern Mandolin Quartet performing Stravinsky’s Pulcinella Suite, arranged by the ensemble’s Paul Binkley, who passed away in 2014.

The Quartet was formed “to modernize the [mandolin] sound and bring it into music you hadn’t heard before,” says Rath. “There had been a certain body of classical mandolin music that happened through some of the Baroque, Classical, and Romantic eras, but not much in the modern. Ancient Voices of Children [George Crumb, 1970] has a prominent mandolin part, and there’s some in Mahler. But when I got immersed in it, you couldn’t go into a conservatory and not be laughed at, if you wanted to play the mandolin, unless it was in Germany. The woman who Mike Marshall’s wife, Catarina Lichtenberg, studied with, Marga Wilden-Huesgen, was the only professor [of mandolin] in Europe.”

Germany, says Rath, still has “more classically-trained players, who use different picks and more of an 18th-century style of playing.” In the U.S., “it’s a much different sound, and you find much more diversity,” as showcased at the festival. With their latest CD, Americana, recorded for the Sono Luminus label in 2012, before Binkley’s death, the Quartet was “trying to reestablish our connection to the instrument and how different musics influenced great composers like Dvořák. It’s American themes, American-inspired.”

Rath also points out that, although Italians (including Stradivarius) gained early prominence in the manufacture of mandolins, the U.S. has produced some of the best of modern luthiers. In the 1920's, “Orville Gibson redesigned the mandolin to be more Americanized, flatter, with a curved top and back, and Gibson was very aggressive with their marketing.” They expanded into larger mandolins with a lower range, including the mandola, the mandocello, and even mandobasses, which are positioned with a spike on the floor and played standing up. Most if not all of these varieties will be in evidence at the festival.

Rath’s and Marshall’s instruments are in the F5 style, with f-shaped soundholes, made by New Yorker John Monteleone, who was recognized by the Smithsonian as one of six great global luthiers. “But the Lloyd Loar mandolins, made [for Gibson] back in the ‘20s, are considered the Stradivari of mandolins, and some of them sell for $200,000.”

But there are companies like Weber, in Bend, Oregon, “making decent instruments that are more mass-production,” Rath allows. Many of these are likely to be in evidence at the festival, where there will also be opportunities to connect with a goodly array of local teachers. Or to just sit and listen to the wonderful variety of sparkly sound. “It’ll be a lot of fun,” Tony Phillips promises, “and that’s our priority.”