La Stupenda is no more. The brilliant coloratura soprano Joan Sutherland, who died a thousand deaths onstage after emitting flawless high E-flats, died on Oct. 10 at her Swiss home near Montreux. 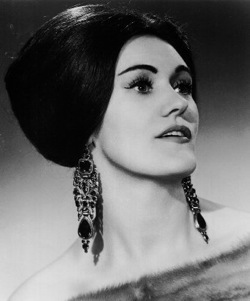 Born Nov. 7, 1926, in Australia, Sutherland received her initial training from her mother, a mezzo-soprano who had studied with the famed Mathilde Marchesi. Young Joan regularly practiced the same Marchesi exercises that built the career of many a stunning coloratura, including Nellie Melba.

After winning a vocal competition, she moved to London in 1951 to continue vocal studies. It took four auditions before she was accepted into the Royal Opera at Covent Garden. Thank God she persisted.

The most decisive influence on Sutherland’s career was her husband, conductor Richard Bonynge, whom she married in 1954. It took him three years to convince his wife, who had once thought herself a mezzo, that her exceptionally large, agile voice was ideally suited for the coloratura heroines of Bellini, Donizetti, Handel, and early Verdi.

Several early recordings for London/Decca confirmed her supremacy in coloratura roles. These include her 1958 Acis and Galatea, a 1959 recital of Donizetti and Verdi conducted by Nello Santi, and her indispensable 1959 Don Giovanni, conducted by Carlo Maria Giulini.

The 1960, Sutherland followed Maria Callas’ lead by creating vocally astounding portrayals in Bellini’s previously neglected I Puritani and La sonnambula. The same year, London/Decca released Sutherland’s two-LP set, The Art of the Prima Donna. Conducted by Francesco Molinari-Pradelli, the meticulously annotated album presents Sutherland singing 15 arias associated with the famous coloraturas of a bygone era. It remains one of the greatest operatic recitals of all time.

Sutherland made her American debut in November 1960 at Dallas Opera as Alcina. The performance earned her the title La Stupenda. Her landmark complete recording of Lucia came in 1961, the same year she made her Metropolitan Opera debut in the title role.

I was there on Nov. 26, 1961, when Sutherland made her Met debut. As a junior in South Side Senior High School in Rockville Centre, Long Island, I was already in the process of wearing out our LP of Sutherland’s 1959 recital when my high school music teacher asked who wanted tickets to Sutherland’s debut. My arm shot up almost as high as the Empire State Building.

I was seated a mile high in the famed horseshoe of the old Met. Even today, no words can adequately describe the thrill I felt when Sutherland’s voice cut through orchestra and ensemble with breathtaking brilliance. Although she sounded a little shaky in the famed sextet, her Mad Scene was riveting.

Sutherland’s first high E-flat in the middle of the scene transferred the madness to the audience, which applauded and cheered for five minutes. After something like 11 or 12 bows mid-scene, half the audience started to go “sshh” so that the soprano could continue. The rest of the audience, refusing to desist, began stomping their feet, demanding yet another bow.

As the Met balconies literally began to shake from the pounding, my teacher, Miss Dietrich, turned an even whiter shade of gray, convinced that the famed edifice was about to crumble beneath her. It didn’t, and Sutherland completed the Mad Scene, collapsing after another astounding, radiant E-flat.

I remember sitting there, wanting to applaud, but unable to move my hands. Then I realized that no one in the audience was able to move. We were all frozen in wonder. It was my first experience of music's power to transport an entire audience to another dimension. (Yogis spend years trying to achieve what Sutherland created in 20 minutes.) When the spell broke, and we returned to our bodies, 12 minutes of delirious applause erupted.

Sutherland’s early recordings, made when the voice was at its freshest, capture her instrument before her tendency toward mushy, mealy-mouthed diction began to dominate. (Many of her later recordings are plagued by a bland “whuh” sound in the low- and mid-range.) Some of those early operatic sets were re-recorded a decade later, after she began her ideal stage partnerships with tenor Luciano Pavarotti and mezzo Marilyn Horne.

She also recorded more-obscure fare, such as Massenet’s Esclarmonde. An equally astounding achievement is her 1972 Turandot with Pavarotti and Caballé, conducted by Zubin Mehta. Here, she shares the power she could summon forth in her early forays into Wagner. As an alternative to Birgit Nilsson's approach to Turnadot, the recording is irreplaceable.

While other LP- and CD-era coloraturas have come and gone, including Callas and Beverly Sills, who could also take your breath away, none could achieve Sutherland’s level of sonic brilliance and technical perfection. She remains without equal. Bless her for transporting us to realms where music speaks its greatest truths.