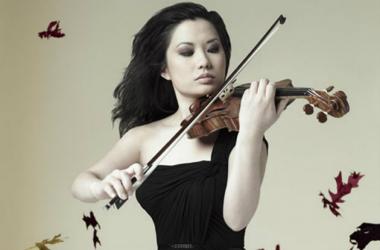 Look carefully at award-winning violinist Sarah Chang when she makes her first Bay Area appearance since 2013 in a concert with pianist Julio Elizalde in Chamber Music San Francisco’s series of performances March 12-14.

Why? Because her ears have grown, multidimensionally.

“There’s nothing specifically technical about my playing that has changed lately,” says Chang, “but there’s the whole area of my ears opening up. I’m now looking at a score and looking beyond the violin line to see how a composer phrased his question. To think of a piece in its entirety is something I never looked at when I was younger.”

Chang’s “rocket ride” onto the world stage as a soloist is well known: Child prodigy picks up violin at age 4, debuts with the New York Philharmonic and the Philadelphia Orchestra at age 8, three years later in 1991 the 11-year-old wows Walnut Creek audiences performing with the California Symphony, and continues on a trajectory that includes performing with the world’s finest conductors and symphonies, earning awards and honors that range from Hollywood Bowl's Hall of Fame award to the Avery Fisher Prize, releasing over 20 albums, and more.

It’s a wonder that Chang has not suffered burnout—or maybe it’s not surprising at all. For if there’s a second “change” Chang has undergone—a practice beyond more exquisite, efficient bowing or honed-to-perfection phrasing—it’s learning how to drive herself at variable speeds.

“I started out so early and it was all about playing the big standard violin concertos. Everything was 100-miles an hour from day one,” she says. Lately, she’s embraced nuance. And—back to the subject of ears—Chang says listening to chamber repertoire in a polyphonic way is her current passion. “It’s helped my solo playing. Now, I hear the whole sound, instead of my ear thinking of the violin line in a horizontal way.”

Intentional zigzag or vertical listening does not mean departure from the lessons learned at Juilliard from her most famous teacher, Dorothy Delay, who died in 2002 at age 84. “Everything she said stays with me. She’d take apart an entire piece and work for hours—a whole day—on one page. But when I went on stage, she’d say forget everything and play from the heart.” “You learn to color your performance and shade it in ways that are important for a certain composer. It’s like in your teens, every break-up is a seismic shift. As you get older, it’s a matter of knowing which rep suits you and which pieces are things where you need to check yourself.”

Chang says a person’s temperament essentially remains the same—she has described herself in the past as “turbo charged”—but with maturity, control increases. “You learn to color your performance and shade it in ways that are important for a certain composer. It’s like in your teens, every break-up is a seismic shift. As you get older, it’s a matter of knowing which rep suits you and which pieces are things where you need to check yourself.” Sibelius and Bruch, she says, can be played as if “you wear your heart on your sleeve.” The gorgeous and romantic works of Bach and Beethoven require “controlled drama” and parameters to retain their authenticity.

To discover the secrets that drive a composer’s music, Chang like many of her peers relies on research. Shostakovich’s Violin Concerto No. 1, a piece she says has taught her the most about herself, is rare in that Chang learned the work entirely on her own. She read extensively about the composer’s life under Stalin’s rule, and his subversive actions—hiding the concerto, changing its opus number—to preserve it. “Most of the other rep I learned while I was a kid, through lessons, very routine. This work is imprinted on me. It’s a monster of a piece.” Mastering the work’s “mad, then angry, then raging” early progression that resolves itself in the third movement’s peaceful, spiritual epiphany, Chang says, “You live a lifetime when you play this work.”

The March concerts in San Francisco, Walnut Creek, and Palo Alto include Bartok’s Romanian Dances, Brahms’ Sonata No. 3 in D Minor, Franck’s Violin Sonata, and Ravel’s Tzigane. Chang says Franck’s sonata is “glorious;” the Brahms, an ongoing inquiry that leaves her with a feeling of awe; and the Ravel, “just fun, a show-stopping piece.”

The Bartok was not in her repertoire and demonstrates the way in which collaboration keeps a solo artist fresh, flexible, constantly learning. “That was all him,” Chang says about Elizalde’s equal role in their partnership. “He’s not just accompanying me: he’s my pianistic partner. He challenged me to make (the Bartok) our opening.”

Chang is well-conditioned for performing the usual, 35-minute concertos with orchestras across the world. This program, two hours of large, dramatic pieces played at top volume, demands stamina. “I remember the first time we did this program. We said, why did we do this? We should take one piece off,” she recalls.

Mindful of her body’s need to recover, after-show massages are aimed not only at her arms and shoulders, but at her feet. “People never think of a violinist’s feet, but standing in high heels for a two-hour sound check and a two-hour show…that friggin’ hurts,” she says.

Although there are sacrifices she’s made as a solo artist, there are no regrets, even about missing her high school prom. “It was a sore point at the time. I had to go play for Queen Elizabeth and at that age, I thought prom was more important. When you look back on it later, it isn’t that big a deal.”