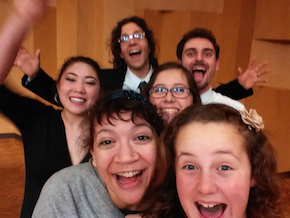 A Mimi Glowing With Music, Not (Yet) Radioactivity

On Friday, July 18, she turned 29. On May 23, she underwent a six-hour operation to remove a cancerous growth "between my thyroid and the interior side of the sternocleidomastoid muscle."

After the successful surgery, Sessler was prescribed radioactive iodine therapy, which will actually make her radioactive (see description below). She will not be allowed to be near people or pets, so she decided to postpone the treatment until after Bohème, a recital in Mexico, and a recording with Ragnar Bohlin's Cappella SF. "My doctors wanted me to do the radiation right about now, but they agreed to wait."

Sessler's decision to give priority to performance over medical advice brings to mind another Puccini heroine, Tosca, and her "Vissi d'arte" (I lived for art).

A number of singers have survived throat cancer (to use a general, if imprecise, term) and resumed their careers (most recently, tenor Toby Spence, who recently sang a gorgeous Serenade with the San Francisco Symphony). But Sessler's short recovery time and the postponement of follow-up treatment make her unique.

When I called her risky actions brave, even heroic, Sessler demurred, giving credit instead to the support of family and friends — the latter even set up a fund-raising CrowdRise page. "Without help I would not have been able to take all of this time off." She describes the iodine therapy:

It is a pill that is taken once only. The period of the treatment lasts about four weeks though, because I have to starve myself of the thyroid replacement hormone for three weeks prior to the radiation pill to increase its effectiveness. And then I will be radioactive for two days and have to be isolated.

I'll have radioactive super-villain bodily fluids, so I can't get closer than 10 feet of any people or pets during the two-day isolation period. Afterwards, I'll restart my lifelong course of thyroid replacement hormone, and hopefully get back to semi-normal life.

Sessler began singing at age 5, "and never stopped." She is a member of the San Francisco Symphony Chorus, a voice instructor, and a lecturer at San Francisco State University. The history of her encounter with cancer:

For two or so years I had this funny little bump in my lower neck. Sometimes it would hurt and sometimes it didn't. I tried to get it checked out when I first noticed it, but my cheap private insurance wouldn't cover the cost of an ultrasound, and as a musician and voice teacher I could not cover the cost myself.

Finally, this year with the advent of ObamaCare, I had a plan good enough to cover what I needed. I had an ultrasound and biopsy, diagnosed with a golf-ball sized tumor of papillary thyroid carcinoma on April 30.

Sessler today can see the bizarre in manner of the diagnosis:

When I walked into my endocrinologist's office for the diagnosis, while the nurse took my vitals, she asked me to sing for her. I chose to sing as much of "Donde lieta usci" (Once happily leaving) from Bohème because I'd been working on it for my big debut as Mimi this summer. Everyone in the office could hear me, and clapped from the other exam rooms.

I was moved into the exam room where Dr. Jaffe would see me, and waited for him to arrive. When he entered the room, he didn't say hi or smile. He looked at me and said, "You know why you're here right? Have you gone online and looked up what's happening?" I blankly looked at him because I had no idea what he was talking about.

I looked told him the nurse just told me to come in, and the doctor replied, "Well, it's cancer." Honest to God, my first thought was, "But what about my show this summer?" Dr. Jaffe smiled and said that I might not be able to do it, but that we'd try to figure things out regardless. He also said that in his 22 years as an endocrinologist, he'd never seen a cancerous tumor that was painful.

It turns out that with a thyroidectomy procedure, there are actually significant risks to the vocal folds and their function. The thyroid is situated in the center and lower part of the front of the neck, in the shape of a butterfly, and its sides ("wings") rest near nerves on either side of the trachea called the recurrent laryngeal nerves.

Sessler has the highest praise for the medical professionals' caring and understanding work, especially from the "only one surgeon Dr. Jaffe trusted with the procedure, Dr. Adriane Concus." The soprano was lucky to have the malignancy removed in such a way that the surgery  did not interfere with her voice and continued career. In fact, she sees improvement in her singing:

I am better than ever, and have actually had a huge amount of positive change. My suspicion is that my tumor was pressing upon one of the recurrent laryngeal nerves and it was negatively affecting my vocal production. I'm not sure if I'm a coloratura anymore, but I am so happy with the other changes I'm experiencing, that I don't mind.

West Edge Opera General Director Mark Streshinsky says as soon as Sessler found out about the surgery and iodine treatment, she called him:

We decided together to go forward with her participation and I'm so glad we did. Besides being a consummate artist, it's clear that Alexandra brings something extra to the role of Mimi. There's a vulnerability that is unmistakable and it's clear that she identifies with the character in a very special way.

Of the production — conducted by Jonathan Khuner, and also featuring James Callon as Rodolfo and Christine Capsuto as Musetta — Streshinsky says:

This Bohème is audience interactive. The cast frequently moves among the audience and sometimes the audience takes an active role. Act two ends in a big Puccini dance party. It's our hope that opera goers will enjoy themselves while experiencing the fun and also pathos of this much beloved opera.