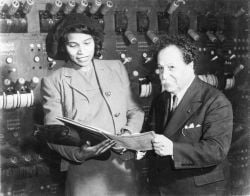 San Francisco Symphony’s centennial season, opening in a couple of weeks, is an important story in itself, but there is more to it than the big, impressive round number of 100.

(Scholars please note: It’s been a century since formation of the orchestra, but the Depression-era cancellation in 1935 means this is the 99th season.)

Going back in time from the orchestra’s first concert, on Dec. 8, 1911, there is the utter devastation of The City just five years before.

The mayor of the city in 1906, when the quake and fires laid waste to almost five square miles of San Francisco, was Eugene (“Handsome Gene”) Schmitz, a violinist, composer, conductor, and president of the American Federation of Musicians’ Local 6 (founded in 1896).

Among other luminaries, consider conductor Pierre Monteux and contralto Marian Anderson, who made her debut with SFS in 1937; two years later, Anderson triumphed over being barred from singing in Constitution Hall with a nationally broadcast concert at the Lincoln Memorial.

Going even further into the history of music here, Yerba Buena, settled in 1835 and renamed San Francisco in 1847, did not have to wait long before “grand concerts” and opera came to the muddy streets of the Wild West town of some 25,000.

The Germania Concert Society made its appearance in 1854, the San Francisco Musical Institute in 1869, and the Orchestral Union in 1879.

Standards varied. Larry Rothe’s Music for a City, Music for the World describes how, in the 1880s, the conductor at a concert dropped his baton and covered his ears.

On the other hand, the mere arrival of Harry Hadley, the Symphony’s first maestro, was a triumph before he first lifted the baton. Leta E. Miller’s soon-to-be-published book The Multitude Listens with the Heart, which covers the early years of SFS, cites a 1911 San Francisco Examiner report of Hadley, “a musician of international reputation,” as being “the kind of a man that society takes to, and without society music cannot succeed in San Francisco.” As then, so it is now.

Reviews of the first SFS concert, on Dec. 8, ranged from “extremely intelligent” to “‘disappointed’ would be expressing our paralyzed state of astonishment but very mildly. The truth is we were shocked.” Yes, it was the first performance, but preceded by 17 rehearsals.

Miller’s history of the Symphony’s early years traces the ups and downs of the organization through the tough, early, postquake days, to World War I and through the Great Depression, until WWII, which involved The City in a dramatic fashion.

Today’s fiscal problems, real as they are, pale in comparison with the Thirties, which saw one season consisting of four concerts and another canceled altogether. San Francisco’s support for the arts came through even during the worst of times, when voters approved a property tax of half a percent to help the SOS (Save Our Symphony) campaign.

As now, emphasis back then was on the importance of the performing arts for The City, and Local 6 of AFM spread the word that “the Symphony is an institution that has not only been a cultural, but a business asset to our union and city.”

Miraculously, in 1935, the worst year of the Depression, a ballot measure passed by 64 percent of those voting to maintain the orchestra — just one of history’s many meaningful chapters of the Symphony centennial.

Speaking of Music a Century Ago

National Jukebox is a Library of Congress project, a Web site that gives free access to over 10,000 recordings made between 1901 and 1925. These recordings, from the RCA and Columbia vaults now owned by Sony Music, include performances by Al Jolson, Enrico Caruso, Nellie Melba, Sergei Rachmaninov, and George Gershwin, the latter performing Rhapsody in Blue, with the Paul Whiteman Concert Orchestra.

The entire Victrola Book of the Opera from 1919, which describes over 110 operas, has been digitized, so you can read the full text and also stream some of the associated recordings. (Full disclosure: That’s what the site says; so far, I haven’t been able to find them.)

The interactive feature allows access to descriptions of individual operas. If you want to read up, for example, on the San Francisco Opera’s upcoming Lucrezia Borgia, just click on that link.

Spoken word is also in the Jukebox, such as speeches by Theodore Roosevelt and William Howard Taft, and early sound-effects recordings. If you want to look around at random, use the “Day by Day” feature. Sony Music provided all the material free of charge to the Library. 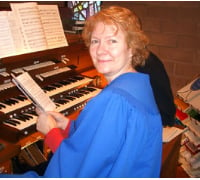 A SJCO-commissioned work based on keyboard sonatas of Antonio Soler, Michael Touchi’s Capricho Soleriano, will have its premiere at the concert, featuring Danica Sena and castanets. Couldn’t we have Turner visit a certain city to the north to introduce some exciting programs here, as well?

S.F. Opera Broadcasts in a Month of Thursdays

In the Groove at the Grove 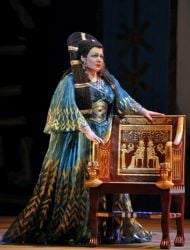 If Friday night [in the Opera House] was the night for the Guys, Sunday was Girls’ day, even with some mighty fine singing from Ao Li, Ryan Kuster, and Brian Jagde. Leah Crocetto, Susannah Biller, Sara Gartland, Maya Lahyani, and Nadine Sierra (in one of her few public performances in these parts) owned the day.

National Treasure Dolora Zajick was the headliner and she gave a generous sampling of why she is so beloved: “La luce langue,” “Voi lo sapete,” the Principessa’s aria from Adriana Lecouvreur. Plus “Mira o Norma” with surely the best partner she has had recently, Leah Crocetto, and “Ai nostri monti,” with probably the biggest-voiced partner she has had in a while, Brian Jagde.

Zajick also sang “Climb Every Mountain” as a towering and moving encore, and all the girls closed with their terribly funny send-up of Musetta’s waltz, “Quando m’en vo,” from La bohème, Dolora knocking the rest to their knees, taking all the high notes spot on. Giuseppe Finzi on the podium was a blessed relief from the woes of Friday night’s conducting. 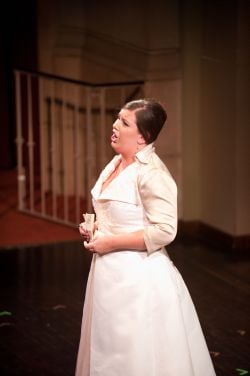 Don’t let me count the ways I love master classes ... there are too many. One aspect came to focus last week near the end of Merola 2011, in Herbst Theatre.

Warren Jones was working with Marina Boudart Harris on the Embroidery Aria from Peter Grimes. I have heard this bitter lament many times during performances, but it didn’t stand out for me as much as other parts of Grimes. In the middle of everything else, it seems like a simple, sorrowful lullaby. It’s so much more than that when you really hear it.

Now, with Jones hovering over the singer and pianist Ana Maria Otamendi, who was talking, singing (for a pianist, he is a damn fine singer), explaining, storming, cajoling, and instructing Otamendi how to make the music “brutal,” the aria became a work unto itself, an amazing piece, never to be taken for granted again.

Incidentally, I’ve never heard a performance — not tonight, either — where the text, the very important, poignant text, could be understood. I am obliged to Jones for reciting it, and elsewhere thank heaven and Lotfi Mansouri for supertitles.

Jones continued with Suzanne Rigden and “Der Hölle Rache,” Gordon Feng with “Ah! per sempre” (from I Puritani), and Joo Won Kang with “Vision fugitive” (Hérodiade), illuminating each aria, as the young singers improved minute by minute.

Harris went on Saturday to give one of Merola Grand Finale’s most memorable performances, a consistent, elegant Arabella, conveying Richard Strauss’ complex, ultraromantic music with purity, without ego. Supported well by John Maynard’s Mandryka, Harris made her mark, making the best of Jones’ master class, of Merola’s 10-week drill. 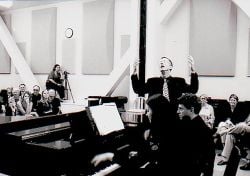 Jones gave a forceful, memorable minilesson to pianist Clinton Smith about the exclusively vital part of pressing down on a key to produce a sound (“and then there is nothing else you can do with it, not like with strings, the pedal only adds color, the sound itself is complete in a split second, it doesn’t matter how you lift your finger off: it’s all in the pressing”), recalling the time when Seiji Ozawa pressed down on his hand to convey the same information.

And a story about the time when Jones played the celeste in the SFO production of Peter Grimes, with Pritchard conducting, Jon Vickers in the title role, and a great cast all around (including Geraint Evans, John del Carlo, John Duykers, and Luana De Vol). The celeste has one single appearance in the entire work, played while the apprentice screams, falling into the sea.

That day, Jones had a four-hour rehearsal of another opera (he said Idomeneo, but that was not part of the 1976 season), and six hours at another, arrived in the pit, and promptly fell asleep. Mysteriously, he woke with a start to see Pritchard looking at him ... and he started playing his part, exactly on time. Ah, the power of the subconscious! Ah, the wonder of master classes.

Listen to Ellen’s aria with Patricia Racette, though it’s just not the same as spending a half an hour with it and Jones.

Opera Outside the Box: Four Saints and Britten

This was some Sunday: first the Glyndebourne live streaming of Benjamin Britten’s Turn of the Screw, and then the final performance of Ensemble Parallèle’s Four Saints in Three Acts at Yerba Buena.

Of the latter, I have this to add to Jeff Dunn’s review: Never have I seen so many talented and dedicated people give so much for so little. The work itself, in the well-chosen words of another review, is “a cloying little theatrical concoction ... a grade-school pageant.”

Something similar, and yet entirely different, is true about the Britten. It is a story I never understood, and yet it’s a great opera. I’ve heard it many times and would again; no troika of quarter horses could drag me to another Four Saints.

About the Glyndebourne streaming: It’s video–audio perfection. The production is totally wonderful, and the combination of clear diction and supertitles accomplished a rare example of communication, the opposite of Stein’s merry yanking of the listeners’ chain. Take advantage of the availability of a podcast for the Britten. 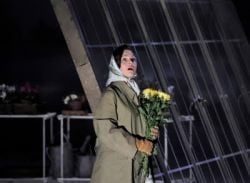 As for my continued bafflement about what is the screwy-creepy “message” of Screw, I turned to the Sage of Brno, Charlie Cockey, and he took the matter under advisement:

Nobody understands the story — that is its brilliance — nothing is explained; ultimately nothing is even definite — and yet it does cast a spell, a pall, really, that is about as creepy as anything ever written. There is something about Quint that goes beyond creepy, and Miss Jessel’s combination of predation/predator and pathos/pathetic victim is likewise both inexplicable and creepy.

One of the powers of opera is its occasional ability to illuminate works from other sources in ways the other sources are not capable of. Case in point (for me): The House of Bernarda Alba — a strange, dark, bothersome play by Lorca. I never really understood that one myself, until in Hamburg I saw an astonishing production of Aribert Reimann’s opera version of it, presented in an equally riveting performance.

Even in German, with German supertitles, I cannot see anyone missing the point, so scathingly communicative is the music. Its relentlessly abrasive vocal lines and scratched-glass instrumental writing conveyed the atmosphere of the house, the family, and the story with an undeniable immediacy that the words and speaking actors could only imply. There was no escape from the sheer vitriol of the entire proceedings that didn’t so much hammer the point home as it did flay one’s sensibilities into rent submission. An incredible experience and an epiphanic revelation I’ll never forget.

In that it presents the dichotomous paradox James intended perhaps even better than James, watching this Screw is akin to Reimann’s Lorca — minus the sense of “understanding,” of course — and certainly on a par with it. (And much easier on the ears, as Reimann wanted those unstoppable dissonances and jagged vocal lines, constant leaps of minor 9ths, and so on.)