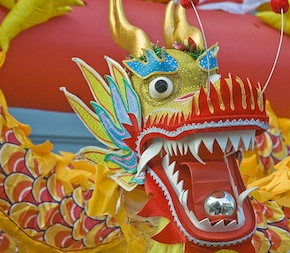 The lunar new year, which started yesterday, means celebrations for Vietnamese (Te’t), Koreans (Seol-nal), Mongolians (Tsagaan Sar), and many others, but the shorthand reference is usually “Chinese New Year.” And, for Chinese, Chinese-Americans, and and all San Franciscans, it is Year 4710 (or 4709 or 4649, depending).

This is not only the Year of the Dragon, but the Year of the Water Dragon — more precisely, the Black Water Dragon — containing Earth, Water, and Wood. Water has a calming effect on Dragon’s fearless temperament, probably enabling a few members of Congress to sit together, regardless of party affiliation, at tonight’s State of the Union address.

San Francisco Symphony will mark the holiday on Feb. 11 with its 12th annual Chinese New Year concert and celebration in Davies Symphony Hall and in the City Hall Rotunda. It will be an all-Chinese and Chinese-American affair, conducted by Carolyn Kuan, and featuring sheng artist Hu Jianbing and pianist Jie Chen. Sheng is a large mouth organ, a blowpipe and bamboo or metal pipes extending from the top of the bowl. 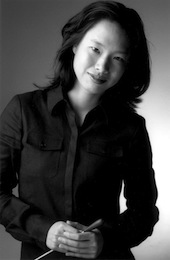 As usual, the program opens with the traditional lion dance. Musical selections include Mao Yuan’s Dance of the Yao People; Huang Ruo’s Yellow Earth for sheng and orchestra, and his world premiere of an SFS commission; Nie Er’s Dance of the Golden Snake; and Bright Sheng’s “From the Savage Land” of Postcards.

The concert concludes with the Yellow River Piano Concerto. Although Kuan and Jie Chen have performed this cheesy leftover from the Cultural Revolution before, and even recorded it for Naxos, it’s strange that they chose to present it during this celebratory event.

Mao Zedong ordered a group of musicians to write the concerto in 1969, the same year he declared the terror of his Cultural Revolution to be over. It wasn’t, not until 1976, and among its countless victims were many artists and musicians.

Metropolitan Opera star bass Hao Jiangtian, who grew up in China during the Cultural Revolution, recalls how his piano teacher was thrown into prison, his musician parents destroyed all their classical records to avoid the same fate, and many of their colleagues committed suicide.

The concerto, called “a flower of Chairman Mao’s Cultural Revolution” (see next item), does not have sufficient musical value to overcome that onus.

Michelle Dulak Thomson, of this august publication, is puzzled by the name Yundi Li turning into plain Yundi, on the order of Kennedy, Madonna, et al.:

Yundi Li is now YUNDI. And his new CD is thus advertised —

‘For his first non-Chopin recording, YUNDI turns to repertoire from his native China on The Red Piano. Anchored by the Yellow River Concerto, the release also features traditional Chinese songs which have been arranged to reflect the lush Romantic tradition in which Yundi excels.

‘After his triumphs in the works of Western composers such as Chopin, Yundi turns to music of iconic status in his native China. Lavishly deploying folk melodies, and evoking epic vistas, the Yellow River Piano Concerto a flower of Chairman Mao’s Cultural Revolution has its source in a patriotic cantata, composed in 1939 by Paris-trained Xian Xinghai. Complementing the concerto are evocative arrangements of favorite songs that show Yundi at his most personal and beguiling.’

Try to pick the most annoying bit: I think it’s probably the idea that the Yellow River Concerto was ‘a flower’ of the Cultural Revolution, which to my eyes is roughly like calling it a flower of Katyn, or of Sobibor, or, more to the point, of laogai — Reform Through Labor, the equivalent of ‘Arbeit macht frei.’

When did EMI start turning into Sony, anyway?

The Milken Foundation calls attention to “the old joke that the Chinese culture has to be older than Judaism — otherwise, where would Jews have eaten?”

No joke, Jewish and Chinese cultures have seen some overlap over the years. Case in point: Aaron Avshalomov, Siberian-born composer of operas and symphonic works, who spent most of his adult life in China, where he was conductor of the Shanghai City Symphony.

Such works as Four Biblical Tableaux, written in 1928 for the dedication of Temple Beth Israel in Portland, Oregon, show the clear influence of Chinese music. After World War II, Avshalomov settled in the U.S. and continued his career as a composer and conductor. 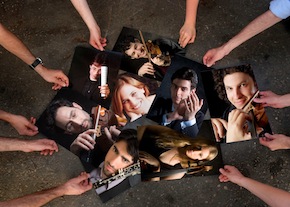 Members of the Israeli Chamber Project, an ensemble of young musicians based in Tel Aviv and New York, are giving a concert at Berkeley City Club tonight, part of the Berkeley Chamber Performances series.

ICP brings together young Israeli musicians for concerts and educational outreach programs, offering master classes for students of all cultural and economic backgrounds. 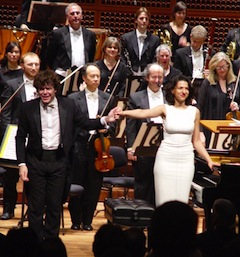 Thursday was a variation on an unforgettable experience in Davies Symphony Hall seven years ago. Back then an 18-year-old dazzled in her San Francisco debut, at a Chinese New Year event, a family concert, such as the one described in the top item of the column.

Thursday, a 24-year-old blew me away with one of the most spectacular performances of the Ravel Piano Concerto in G Major I’ve ever heard. See Jeff Dunn’s review of the entire grand concert.

It was a world-class performance; dare I say “an Argerich-class one”? Yes, I do, notwithstanding this memory, and of the three fabulous times I heard Argerich live in this work.

In 2005, it was Yuja Wang. This time: Khatia Buniatishvili.

You can see them together; Buniatishvili in “Liebestraum” or, especially, with Prokofiev.

In Davies Hall, her debut here, she astonished with fingers of steel, exquisite sense of the music, melting lyricism without sentimentality — and the whole, which was greater than its parts.

Three rounds of standing ovation — at a matinee for mostly seniors— were well justified; my only regret is no outburst of applause after the stormy first movement. There are works and performances when acknowledgment of something outstanding is more correct than respectful silence between movements: This was a prime example of that.

The San Francisco Symphony kept up with Buniatishvili almost all the time, under the always-impressive baton of Pablo Heras-Casado, whose SFS debut two years ago was superb.

Just finished watching her do the Prokofiev #7 (rude break in the middle of the slow movement, a pity, since it’s so lovely), that manic 7/8 closing ...

I only wish that my old piano teacher Carroll Meyer were still alive — Khatia’s hands are the absolute embodiment of everything he tried to teach me — watch her RH little finger and LH 4th — and the “kneel joint muscle” at the side of the hand running from the base of the little finger to the wrist. She has absolutely got it all!

I have rarely if ever seen hands like hers — breathtaking — the musicianship is astounding as well, and yes, comparisons with La Martha [Argerich] are in order, starting with her strength, precision, fire and focus.

Martha’s hands are odd, Yuja’s incomprehensible. That Martha’s do what they do in the positions they assume baffles me, but they do and that’s what matters; but Khatia’s are almost frighteningly perfect. Watching her hands at work I understand why my teacher used to whap mine across the back of the bone for NOT being like that (but I did — and do) try.

Want Fries with Your Mozart?

This Elitist-Purist is nonplussed by the Yerba Buena Center policy, observed only last weekend, and chronicled as:

... [I find it] highly objectionable that Novellus Theater now permits and even encourages — with notices posted around — food and drink in the theater during performances. Apparently, any food, any drink.

I asked an usher why the policy change, and she said “because people asked for it.” That explains the prospect of sitting between fellow audience members consuming something fried, or perhaps — on a good day — grilled.

Caveat: This was the situation at The Gondoliers, apparently a lowly spectacle for the hungry masses, so I don’t know — and am still trying to find out — whether the policy extends to concerts and ballet at Yerba Buena as well. If it does, it’s time for an Occupy YB march.

More and more of the theaters are allowing this. More money to be made by concessions obviously. ACT and Berkeley Rep allow drinks as well as Magic and Playhouse. Novellus is the only one I know of which allows food also.

The Opera House is the only hold-out with which I am familiar. They used to not allow even water inside the house, but now water bottles are allowed. 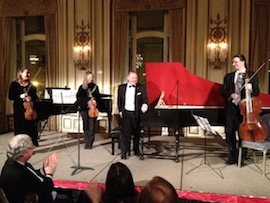 At stake: $20,000 in awards to help pianists, instrumentalists, vocalists, and composers, between ages 8 and 25, on their way to careers, such as the 1917 winner Yehudi Menuhin’s — why not shoot for the stars?

The final competition will be held at the San Francisco Conservatory of Music on March 25.

Yes, but only through the Metropolitan Opera’s HD telecasts in movie theaters of the Father of the Deer, one of the United Arab Emirates, which is definitely going places.

Live events of the Abu Dhabi Art Festival in March include Maxim Vengerov, Yuri Temirkanov, and the St. Petersburg Philharmonic; Anoushka Shankar, Monks from the Shaolin Temple, and much more. For all events, “Dress code is national dress or lounge suit.”

Having warmed up with “transporting performances” of Debussy’s Martyr de Saint Sébastien in Davies Hall, Michael Tilson Thomas is conducting the London Symphony Orchestra this week in a program including Préludes for Piano, orchestrated by Colin Matthews), and Fantaisie for Piano and Orchestra.

The concert is broadcast live on BBC-3 today, beginning at 11:30 a.m. Pacific Time, available as podcast for a week more. 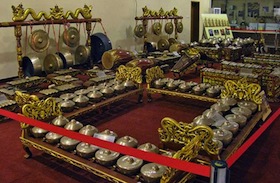 The San Francisco–Shanghai International Chamber Music Festival will make its first appearance at the S.F. Conservatory of Music’s campus, March 12–16. The five-year agreement between the sister schools started with a festival last year in Shanghai.

Among officials and artists of the 15-member delegation to San Francisco will be pianist Li Jian, violinist Fang Lei, and composer Shirui. Participating in the event are faculty and students from the San Francisco Conservatory’s chamber-music degree program, which last year celebrated its 25th anniversary as the nation’s first school to offer such a degree.

Following master classes, rehearsals, and coachings, joint ensembles of faculty and students from the two schools will perform together. Programs include music by Brahms, Hartmann, Hindemith, Shostakovich, and Tchaikovsky, as well as premieres commissioned for the festival from Elinor Armer and Shirui Zhu.

It was 31 years ago that the first Shanghai Conservatory students arrived at the San Francisco school’s old campus on Ortega Street. Today, S.F. Conservatory has more students from the Shanghai school than from any other institution.