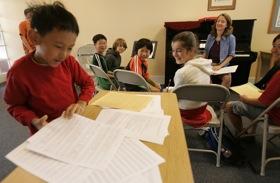 Says Young Composers Program Director Alexis Alrich: "Debussy's Sonata for this ensemble is famous for its exquisite use of the instruments and its elegiac tone, since it was one of his last pieces. We are inspired by this masterpiece to contribute our works to this genre." 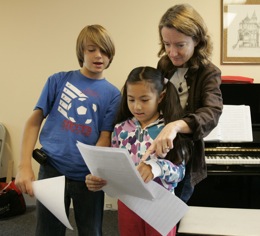 The faculty drew inspiration from Debussy as well as the program’s creative community: "There is a special rapport among these composers born of teaching gifted students in the John Adams Young Composers Program. The faculty concert is the embodiment of this rapport — it is our message to one another and to our students, in our common 'native language,' musical notes."

General admission tickets will be available for $15 at the door only, and as always at Crowden, those under 18 attend free.

The free guest lecture by Brown will deal with the Princeton graduate fellow's current career and work. A San Francisco Conservatory graduate, Brown has received an Emerging Composer Award from the Gerbode and Hewlett Foundations, and his upcoming premieres and commissions include works for Janus, the Paul Dresher Ensemble, and the Brooklyn Philharmonic.

Brown will play his own music, workshop John Adams Young Composers Program student scores, and speak about the world of new music. 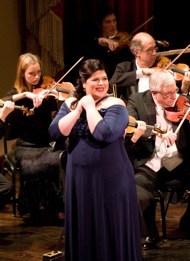 Some 1,500 singers between the ages of 20 and 30 participated in this year’s National Council auditions, which are held annually in 45 districts and 15 regions throughout the U.S. and Canada.

The concert was recorded for broadcast at a later date on public radio stations.

Heggie Reels in the Whale 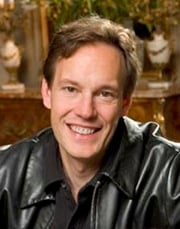 It takes a Calgary newspaper to relay the information from Jake Heggie in San Francisco, but what's important is the fact that Heggie's Moby-Dick is complete: "I just put the finishing notes on the score," he is quoted as saying. Shockingly, the boyish-looking composer will turn 49 on March 31. What's next? Fifty?!

The opera, based on the Herman Melville classic about a whaling ship captain's obsession with a great white whale, is co-commissioned by opera companies in Dallas, San Francisco, San Diego, and Calgary.

The idea for Moby-Dick (as Melville's original title goes) came from playwright Terrence McNally, who wrote the libretto for Heggie's Dead Man Walking, but Gene Scheer became the librettist for the project.

Heggie describes Captain Ahab as "a study in madness, and a really remarkable kind of madness in that he hides it so well with charisma and bravado that everyone on the ship is convinced he's totally fine — that he's just luminous and charismatic, and a great

The opera's libretto imagines the book's characters in the context of a "memoir of something that happened and our job is to tell the thing that happened that would then inspire a writer — the survivor, the character who calls himself 'Ishmael' — to write a book.

So instead of the first line of the opera being 'Call me Ishmael' (as it famously is, in the novel), it's the last line — because the author has lived the experience, and now he'll use his imagination to draw from what happened to him, to create this book.

The San Francisco Opera production is expected in 2012 (the year otherwise marking the end of the Mayan calendar, and portending portentous events).

Charlie Cockey, a film-festival programmer, is a veteran of decades on the San Francisco music scene. He now lives in (Janáček's) Brno, working mostly with European festivals, but he is visiting back home for the just concluded San José Cinequest. 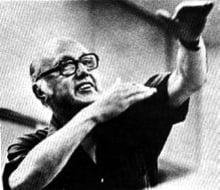 Wow! I have to wonder if Ragnar Bohlin studied with or had any other affiliation with Eric Ericson, or is it just something about Scandinavian choral directors?

For my taste Ericson is THE master, particularly for 20th century music, but Bohlin sure has made the SFS Chorus into something not only superb but damned near stellar. Vance George's chorus always had a rich lush sound, but I was often suspect of its ensemble; I always heard individual voices — often of a more than slightly operatic bent — that protruded from the body of sound.

This is something I don't remember ever hearing under Lou Magor, and something that was completely not present under Bohlin. This is a GREAT chorus now!

I forwarded the message to Bohlin, with a note: "I'd guess you're too young to have crossed paths with Ericson — have you? Or are you just 'Scandinavian'?" (There was a smiley with the question.)

And here's the surprising reply from Bohlin, a tribute to Cockey's fine ears:

Even though I grew up with choral music all around me, both my parents being choir directors, it was Eric Ericson that made an indelible an stamp on me.

When I studied at the Stockholm Conservatory, I sang under him in the very fine Conservatory Chamber Choir, taking on works like Strauss' Der Abend, Ligeti's Lux Aeterna, Poulenc's Figure Humaine, etc. We even went on a world-wide tour to Australia, New Zealand, Hawaii, the U.S. Mainland, and Canada.

I also sang in the vocal ensemble of 16 singers that served as instrument for the choral/conducting students.

Later on I sang for a while in the Ericson Chamber Choir, touring to Vienna, Munich, Berlin, London, etc. with the Bach B-minor Mass among other works.

Ericson was definitely my main influence, and a great inspiration, under those formative years. He is now 91 years old, and still somewhat active, occasionally conducting his chamber choir.

PS: There are legions of Ericson disciples among choral directors and conductors in Europe and the U.S. One amusing item in his biography: in 1997, Ericson shared the Polar Music Prize with ... Bruce Springsteen.
Back to top 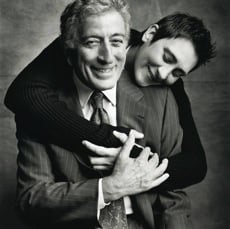 San Francisco Symphony's biennial Black & White Ball, a vital fund-raising event of the Symphony's Music Education Program for Elementary Schools, will be held on May 22 at the Civic Center. Details announced Monday include a lineup of performers headed by the intriguing pair of Tony Bennett and k.d. lang.

Online voting polls are now open for the Black & White Ball’s Build Your Own Ball interactive community campaign to select the local DJ to play a prime main stage set before Kool & The Gang take the stage ... and to decide "which of three Colleen Quen couture ball gowns Chairman Patricia Sprincin will wear at the ball."

The $200 general admission party pass is now on sale, along with higher-priced tickets that include special events.

This summer, the San Francisco Ballet returns to Denmark after 12 years, spending a week at Copenhagen's Tivoli Theater. The company will present two repertory programs, including Helgi Tomasson’s Prism and Chaconne for Piano and Two Dancers, Christopher Wheeldon’s Within the Golden Hour, and George Balanchine’s Stravinsky Violin Concerto.

Recognition for the San Francisco company in Europe includes the Laurence Olivier Award in the category of Outstanding Achievement in Dance, and being the first dance company from outside Europe to be elected "Company of the Year" in Dance Europe magazine’s annual readers’ poll.

An offbeat, nourishing forum for contemporary composers is ODC/Dance, which is currently performing its 39th Annual Spring Season at the Yerba Buena Art Center, through March 28. 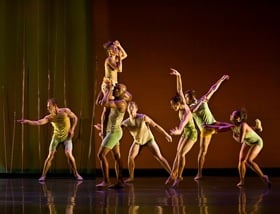 Established by Brenda Way as the Oberlin Dance Collective in 1971, ODC/Dance has not only survived and thrived for four decades, but it's a company that keeps exploring, experimenting, breaking new ground.

The 10-dancer company, headed by Way and KT Nelson, has just completed a tour to Southeast Asia as part of the U.S. State Department's inaugural DanceMotion USA program. It is presenting three intriguing repertory programs at Yerba Buena, including two world premieres.

The premieres are Way's Waving Not Drowning (A Guide to Elegance) to a commissioned score by Pamela Z, and Nelson's Labor of Love to Mozart's Piano Concerto No. 20. Both embody the ODC tradition of combining the freedom of contemporary dance with a sense of discipline from classical ballet.

The new work by Way is on Program 1, which also includes Nelson's 2009 Grassland, to another commissioned score, by Marcelo Zarvos; and Nelson's classic, always gripping 1993 River, to music by Nelson herself and Gunnar Madsen.

The Guide to Elegance in parentheses in Way's title refers to an actual French etiquette manual, recited — with translations — as part of the piece's soundtrack. The humorous, witty choreography illustrates and comments on the manual's various terms.

Labor of Love is part of Program 2, paired with Way's dramatic 2009 In the Memory of the Forest, to an original score by Jay Cloidt, and Way's 2005 Something About a Nightingale, to music by the Tin Hat Trio. The Nelson premiere is about the "push and pull of relationship... ending with resounding joy," reflecting Mozart's music.

Program 3 combines Something About a Nightingale and River, with Way's 2001 24 Exposures, to Appalachian bluegrass performed by Edgar Myer, Yo-Yo Ma, and Mark O’Connor. During last month's Asian tour, The Bangkok Post hailed 24 Exposures as "pure pleasure of movement."