Chorus America to Converge on the City

Chorus America is holding its 34th annual convention in the city, June 8-11, hosted by the San Francisco Girls Chorus and Chanticleer. SFGC, along with the International Orange Chorale of San Francisco, is among winners of the 2011 Chorus America/ASCAP Award for Adventurous Programming; Chanticleer and Volti received the award before.

The conference is sold out, but free attendance is available to the public at a "Community Sing With Chanticleer." It will be held at 2:15 p.m., June 11, in the International High School Gymnasium, at 150 Oak St., adjacent to the San Francisco Conservatory of Music. Reservations are required and can be made online.

San Francisco Symphony Chorus Director Ragnar Bohlin, subject of recent rhapsodic reviews, will provide some of the leadership and instruction at the conference.

He will give a choral conducting master class on June 10, with the International Orange Chorale, and will lead the SFS Chorus in an open rehearsal of Beethoven's Missa Solemnis as part of the conference. The rehearsal is at the S. F. Conservatory of Music, on June 11, from 11:30 a.m. to 12:45 p.m., followed by a Q & A session.

In his native Sweden, Bohlin had significant experiences with associations such as Europa Cantat, which takes place every four years in various European locations. "That's where I first encountered Mahler's Eighth Symphony," he recalls, "singing soprano as an 11-year-old boy in the 1976 festival in Leicester." He also accompanied his parents, both choir directors, taking their choirs to such festivals.

Better known for his conducting work, Bohlin has been a ranking practitioner of aikido for a quarter century. He believes that self-defense martial art is "about control and balance," two essential components of great choral singing.

Many local connections with Chorus America can be drawn: Vance George, Bohlin's predecessor at SFS, is a veteran board member of the organization, was one of its founding fathers, and hosted the convention here a decade ago:

Chorus America is helping choirs and choral conductors create a choral world as we want it to be. This organization works throughout the U.S. on the nitty-gritty issues of concert production, board building, fund-raising, and paying singers.

In fact, it was created to make sure singers get paid — just about all choruses consisted of volunteers in the past. I suggested the name "Chorus America" in a board meeting many years ago. Look at these amazing statistics they gathered about choirs in this country: 42.6 million are singing in 270,000 choirs; there are 42,000 K through 12 choruses; 216,000 church and synagogue choirs; and 12,000 symphony, community, and professional choirs. That means 22 percent of our country, or 1 in 5, sing in choirs. They need an organization that cares; they need Chorus America.

Next week's issue of SFCV will report on the conference in detail.
Back to top

Ellen Taafe Zwilich is the featured composer for the New Century Chamber Orchestra's 20th anniversary season in 2011-2012, and former Music Directors Stuart Canin and Krista Bennion Feeney are joining Nadja Salerno-Sonnenberg for the occasion; this will be her fourth season leading the organization.

The season opens Sept. 20 with Bartók's Music for Strings, Percussion, and Celeste and Rodion Shchedrin's Carmen Suite, in addition to Canin's appearing as soloist in Mendelssohn’s Violin Concerto in D Minor.

In March, Mike Marshall performs his own Concerto for Mandolin and Strings and Caterina Lichtenberg performs Vivaldi’s Concerto for Mandolin in C. The program is bracketed by works from Bay Area composers Gordon Getty (Ancestor Suite) and John Adams (Shaker Loops), plus the first movement of Georgian composer Vakhtang Kakhidze’s Blitz Fantasy.

Next May will bring a Zwilich world premiere, along with Grieg's Holberg Suite, Schoenberg's Verklärte Nacht, and Heidrich's Happy Birthday Variations.

Following the orchestra's successful tour of the East Coast in early 2011, an East Coast tour is planned for the next season, with the anniversary gala on Nov. 5 doubling as a fund-raiser and kick-off for the tour.

Missed the Metropolitan Opera HD simulcast of John Adams' Nixon in China, with stage and telecast director Peter Sellars' obnoxious close-ups of everybody, all the time? Here's a chance to see the otherwise
well-directed and well-sung performance at a distance when PBS airs it at 9 p.m. on June 1. The composer conducts the performance.

The program, in the Great Performances series, repeats the Feb. 12 "Live in HD" cast in movie theaters, including interviews with James Maddalena and Janis Kelly (singing the Nixons), Sellars, Winston Lord (who was Special Assistant to Secretary of State Henry Kissinger), and Adrienne Lobel, the opera's set designer.

Before the Nixon telecast, PBS will show a new American Masters episode about Met Music Director James Levine, marking his 40th season with the orchestra.

Assassins Coming to the Jerry Springer the Opera Company

Even for Stephen Sondheim — who has tackled such iconoclastic subjects as pointillism (Sunday in the Park With George), the West's forceful "opening" of Japan in 1852 (Pacific Overtures), and the horrendous misdeeds of Sweeney Todd — creating a musical about presidential assassins must have been a daunting project. He went ahead anyway, and now it's audiences' turn to be challenged.

In a vaudeville setting, characters from John Wilkes Booth to Lee Harvey Oswald are paraded in a scary, funny, thought-provoking musical that's not for Sound of Music audiences.

The 1990 Assassins will be presented June 2-25 in the Eureka Theater (normally home to 42nd Street Moon) by the Ray of Light Theater, a gutsy local company, which gave an acclaimed West Coast premiere of Jerry Springer the Opera last fall.

Winner of five Tony Awards, Assassins is a strange, inimitable lesson in American history: a searing look into several sick psyches and the pursuit of fame at any cost. The show opens in a fairground shooting gallery where the collection of misfits enters the stage, to leave on their fateful journey.

Characters are given music from their own era, they tell their stories, they confide their thoughts and feelings.

Speaking from offstage, anarchist leader Emma Goldman urges Czolgosz to act, Fromme speaks of her love for Charles Manson, Moore claims she is an informant for the FBI, and somehow Colonel Sanders appears as a graven image ...

With all those dizzying plot lines converging, Sondheim manages to keep it all clear and meaningful. However crazy some of the text sounds, it's all based on facts. Quite a ride, but you'll never know what you miss unless you board the train.

San Francisco Conservatory students and alumni are organizing a benefit concert on May 27 for earthquake/tsunami relief in Japan.

Chamber music will be followed by an orchestra set, featuring brass fanfares by Takemitsu, Vaughan Williams' Fantasia on a Theme by Thomas Tallis, and Beethoven’s Symphony No. 7.

Donations can be made at the door or, in advance, online to the Red Cross

Only three operas are set to come from Artistic Director Mark Streshinsky and Music Director Jonathan Khuner for West Edge Opera's next season, but they sure know how to make it interesting.

Starting ambitiously with a great work that tests even big companies, Richard Strauss’ Ariadne auf Naxos opens the season in November, with Marie Plette appearing in the title role. Khuner conducts, while Streshinsky is the stage director.

A new "English interpretation in manga style" by David Scott Marley of Mozart’s Magic Flute is scheduled in March, directed by Caroline Altman.

The season concludes in July-August with the West Coast premiere of Ezra Laderman's Marilyn, directed by Elkhanah Pulitzer and conducted by Khuner, on July 29 and August 3 and 5.

Something new and wise in scheduling: Both the opening and the closing performances of each opera will take place at 3 p.m. Sunday matinees. The third performances will remain on Fridays at 8 p.m.

"As I continue to explore the opera art form and consider new directions it can be taken," says Streshinsky, "I think more and more about the audience. Opera folk are always trying to come up with gimmicks to get new audiences into the theater, but I think it is equally important to think about the step after that. Namely, how to make opera performances speak to a modern audience that is already enticed to the theater.

"I believe that if we consider opera to be not just great art, but great entertainment as well, then we will demystify the art form. For that reason, this season we present what I am calling 'The Popera Season' — three operas that examine the effect of a mix of classical and popular culture."

There are three new works by choreographer and director Kim Epifano: Heelomali, a multimedia piece developed with composer and digideroo player Stephen Kent and Burmese harp player Su Wai; Alonesome/Twosome, a duet created from a drawing sent to Epifano by Remy Charlip; and Solo Lo Que Fue, a dance-for-video work created this year in Mexico.

Heelomali was inspired by Epifano’s 2009 residency in Wondo Genet, Ethiopia, and developed in partnership with Refugee Transitions, a San Francisco–based nonprofit that assists refugee and immigrant families in becoming self-sufficient in the U.S.

The premiere of Alonesome/Twosome follows a preview performance at a Mad'Art Carthage-produced international dance festival in Tunisia in March 2010, and features local dancers Christine Bonansea and Antoine Hunter. The ensemble of Solo Lo Que Fue consists of dancers and performers from Mexicali.

Reliving Makropulos and Cyrano on the Radio

Two of the more memorable San Francisco Opera productions in 2010 will be heard this summer on KDFC-FM (90.3 and 89.9) and streamed on the Web on Sundays, beginning at 8 p.m.:

The broadcast on Aug. 7 is "Listeners' Choice," being voted on by KDFC listeners.

Chaverdova: a Brief Stop Between Moscow and Beijing

Evgenia Chaverdova is one of the San Francisco Conservatory of Music's talented graduating singers. The 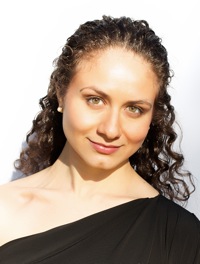 Moscow native has already made her mark on the local lieder and opera scene, in roles ranging from Climene to Public Opinion to Sesto to Mother Goose, and, most recently, as Madame de Croissy in Dialogues of the Carmelites. She will sing Cherubino with Opera Santa Barbara next year.

Before leaving for China to participate in the inaugural year of I Sing Beijing, and then going on to study and work in Amsterdam, Chaverdova is giving a free recital at 5 p.m., May 29, in the Conservatory Recital Hall, accompanied by Tim Bach.

For an up-tempo finale, Chaverdova will sing "Ah! Quel diner!," from Offenbach's La Périchole (Frederica von Stade's signature encore), plus songs from My Fair Lady, hoping that it will all be loverly.

Founded in the 1770s, the venerable Royal Danish Ballet is coming to Berkeley. The first program in Zellerbach Hall will be mostly traditional, dominated by the 1836 Bournonville La Sylphide, from the most famous Danish ballet master and choreographer. The other piece is Flemming Flindt's 1963 The Lesson, to music by Georges Delerue.

The second program, on June 3 and 4, presents some modern choreography and contemporary music — even to the point of Apocalyptica and Metallica. "The Unforgiven," "Sad but True," "Farewell," "Betrayal/Forgiveness," and "Deathzone" stand in extreme contrast with H. S. Løvenskiold's pretty music for La Sylphide.

The rock-based piece is Jorma Uotinen's 2005 Earth ("I don’t seek violence; I seek human contact. Not between bones but between the skin," says the choreographer), and the 2010 Bournonville Variations, by Thomas Lund and Nikolaj Hübbe, is set to music by Martin Åkerwall.

Also on the program: Jorma Elo's Lost on Slow, to music by Antonio Vivaldi (excerpts from violin concertos); and Johan Kobbog's Alumnus, to music by H. Wieniawski-Kreisler and Hans Christian Lumbye. Elo's Double Evil was a hit in its San Francisco Ballet production.