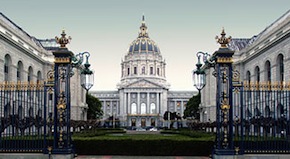 Saving cultural institutions in the days of the Supercommittee failure and continuing recession is hard enough. To build and expand are rarer than hens’ teeth.

To follow up on the Nov. 8 report here about the reconstruction of the San Francisco War Memorial Building and the future of the vital venue of Herbst Theatre, we turned to David Gockley.

Gockley has urged an addition to the War Memorial ever since he became general manager of the San Francisco Opera six years ago. He had wanted what he calls “a patch,” similar to the Franklin Street annex to the Opera House that was added during the Adler years. 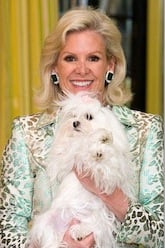 The reason for his mission: the great cost and logistical nightmare of scene and costume shops, rehearsal facilities, office space scattered around town — rent, utilities, transportation, communications costing about $1.5 million a year. The problem with the proposed annex: an estimated cost of approximately $60 million dollars.

That was not to be, but a pretty good substitute came about when Gockley received a phone call from Elizabeth Murray, managing director of the city’s War Memorial and Performing Arts Center, planning for the 2013–2015 seismic retrofit. Gockley recalls:

She asked if we would be interested in the fourth floor of the reconstructed War Memorial, former home of the S.F. Museum of Modern Art. Here was another opportunity on the table, and at an estimated $20 million total cost, it was clear that there we could accommodate everything but the scene shop, which we are phasing out anyway.

(Storage is being handled at a Pier 96 site rented from the Port Commission, where 280 containers are used for scenery.)

To raise funds, Gockley started a naming-gift campaign, honoring donors by naming various locations on the fourth floor after them. First up: Fine Arts Museums of San Francisco president and major philanthropist Dede Wilsey, with a $5 million gift. The entire facility will be called the Wilsey Center for Opera. 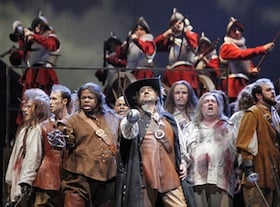 The Center will provide substantial office space for the company (allowing transfer from the current Ivy Street location), as well as costume storage, plus two multipurpose rooms for orchestra and staging rehearsals, board meetings, and social events. The larger room (not yet named) will be a 300-seat performance venue, complete with dressing area and green room; the same space, using risers, will serve for chorus rehearsals.

Architect for the Wilsey Center will be the San Francisco firm of Mark Cavagnero Associates, recently responsible for major reconstruction projects of the Oakland Museum of California and ODC Dance, among many others, and currently working on the coming SFJAZZ building in the Civic Center. No acoustician has been selected yet.

Wilsey Center should be a reality by 2015, a year before Gockley’s recently extended contract is up. As of now, Gockley, 68, says retirement will follow.

Speaking of the future, while awaiting season announcements, Gockley would only give a (heartening) “yes” to the question if there will be works by Berlioz and Janáček among them. When it comes to the long-anticipated Les Troyens, he said that if and when it arrives here, it will not be the Richard Jones production from the English National Opera, originally planned by Gockley’s predecessor to be a San Francisco coproduction.

Another coproduction, of Wagner’s The Flying Dutchman, with Liège’s L’Opéra Royal de Wallonie, is still not announced here officially, but Gockley was willing to talk about it.

When he asked Petrika Ionesco if he would be interested heading a production here, the man responsible for San Francisco/Théâtre du Châtelet Cyrano de Bergerac last year told Gockley that he is already working on a production in Liège. The logical next step was to create a partnership with the Belgian company, where Dutchman is opening this week.

San Francisco Symphony Executive Director Brent Assink, who has had a major role in the growth and success of the organization here, is one of those approached by the New York Philharmonic, which is looking for a successor to Zarin Mehta, president and CEO of the Philharmonic, who is retiring at the end of the current season.

According to The New York Times report:

The executive director of another prospering California orchestra, Brent Assink of the San Francisco Symphony, also drew the New York Philharmonic board’s attention. “I was offered the job and ultimately felt that things were really very compelling here,” Mr. Assink said. “The next challenges for the New York Philharmonic are real. But certainly the opportunities to make a difference are also real.”

'You Are Hear' at SFO (Not the Opera) 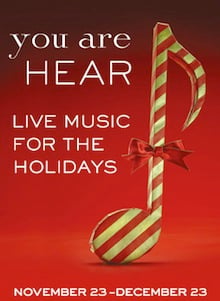 No, this is the other SFO, San Francisco International Airport. And the name of the program is the almost too cute: “You Are Hear,” meaning music for departing and arriving passengers at the airport’s terminals — as well as for the hundreds of people employed there.

Three concerts at one time in various terminals between 11 a.m. and 2 p.m. every Wednesday and Friday are scheduled between now and the end of December. The opening trio includes the Del Sol Quartet, while on the list of classical groups thereafter are the Magik*Magik Orchestra, the International Orange Chorale, and others. Most other performers come from the world of pop, jazz, and world music.

Program curator Marc Capelle says the music helps bring relief during the holiday season: “There are people who work there who have come to depend on it, and then there are the people catching it for the first time who say, ‘Wow, what a great city!’”

The program calls attention to the fact that Terminals 2 and 3 concerts are past security gates — a fact to keep in mind.

Hovering in the Middle Ground 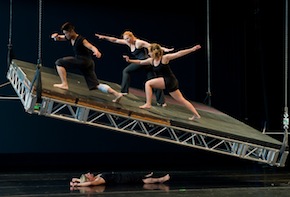 Now that the Printz Dance Project is about to present Hover Space at Theatre Artaud, Nov. 30 through Dec. 3, the question is obvious: What is Hover Space? The company offers a poetic, if not entirely helpful, answer:

Hover Space is about hovering in the middle ground, between the extremes, in the juicy, rich spaces where life really happens. This is the space where risk, action, fear, and movement thrive. And ultimately, it is the place where love lingers.

The physical reality of the place where love lingers is the “hover floor,” a large platform suspended from the ceiling of the theater on four chain motors. “This stage-within-a-stage can raise and lower, but also tilt to extreme angles, affording dancers multiple planes to dance on and new ways to execute contemporary dance.” 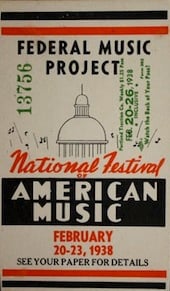 At a time of economic hardship and Congressional opposition to the government’s role in, well, governing, it may be instructive to recall what happened during the Great Depression — the last economic cataclysm used for comparison with our own Great Recession.

The Federal Music Project also provided classes in rural areas and urban neighborhoods. In 1939, an estimated 132,000 children and adults in 27 states received instruction every week. 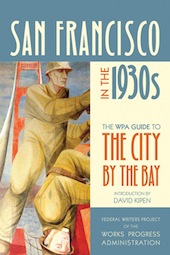 A Composers Forum Laboratory afforded composers in several major cities the opportunity to hear their work performed with complete instrumentation.

The Index of American Composers paralleled the Design Index, cataloguing 5,500 works by 1,500 composers; Works Progress Administration ensembles performed every one of these catalogued works.

Music Project workers also served as copyists, arrangers, and librarians, expanding the availability of musical work. Lots of jobs, new compositions, armies of new listeners — isn’t that a win-win idea! I can just see the Congressional Supercommittee sign up for it, unanimously. (I’d use a grim smiley if the editor permitted it.)

If you need a weighty reference to Handel’s Messiah, consider that Beethoven spoke of it as one of the great works in all music. And so it is, of course — a global favorite, ever since its premiere in 1741.

Among many prominent local performances of the oratorio about Christ’s birth, the San Francisco Symphony’s annual presentation is the place for most listeners, in Davies Symphony Hall.

SFS Chorus Director Ragnar Bohlin will conduct three performances there, Dec. 16–18, and each is likely to be to a full house. Joining the chorus and orchestra will be soprano Joélle Harvey, mezzo Kelley O’Connor, tenor Richard Croft, and baritone Michael Todd Simpson.

“It is Handel’s greatest oratorio through the ages, requiring the very best from soloists, chorus, and orchestra,” Bohlin says. “The chorus needs to be flexible, malleable, to sing in each of the piece’s different styles convincingly.”

Even within the first section, “Isaiah’s prophecy of salvation,” each part has a different sound and style, from the contemplative orchestral opening to the lyrical tenor arias of “Comfort ye my people” and “Every valley shall be exalted” to the rousing chorus “And the glory of the Lord.” Throughout Messiah, there is variety and a constantly shifting musical focus.

One of the most popular programs is the jazz-classical-pop mix of “Colors of Christmas,” Dec. 13–15. After Messiah, there is “Mariachi Sol de México de José Hernández,” Dec. 18; and “’Twas the Night,” Dec. 22–24. Information for these events is available from the SFS website.

Another much acclaimed Messiah production with large audiences is by the American Bach Soloists, in Grace Cathedral, Dec. 15–16. It is led by Jeffrey Thomas; the soloists are soprano Mary Wilson, countertenor Ian Howell, tenor Charles Blandy, and baritone Jesse Blumberg.

Philharmonia Baroque doubles up on holiday presentations with both Bach’s mighty Mass in B Minor (Dec. 2 in Herbst Theatre) and then period-instrument performances of Messiah (Dec. 10 in Zellerbach Hall), both led by Nicholas McGegan. A solo roster of renowned early-music specialists joins McGegan, the Philharmonia Baroque, and Bruce Lamott’s Philharmonia Chorale for the two masterpieces.

The Philharmonia has recorded Messiah, and McGegan conducted the work at the BBC Proms — in September, as the mandatory Christmas time performances apply only to the U.S., something that’s also true about The Nutcracker. In Europe and Asia, both pieces are played regardless of the season.

McGegan represents a big segment of Messiah fans who separate music and religion: “Not being very religious, I do not celebrate Christmas, but as for music, I love such marvelous, noble works. As to the holly, ivy, sleigh bells, and reindeer, I remain totally indifferent.”