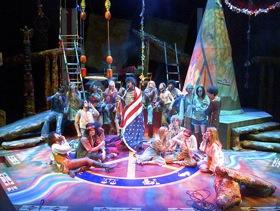 Nor is she coy about her age, to the contrary: she says she is 83 even though her birthday is not until Oct. 28. ("Cleo" and "coy" — an incongruous association for anyone who knows her.) As to the lasting power and beauty of her voice, recent reviews vouch for it, and better yet, you can hear for yourself during her upcoming series of shows here, Oct. 19-24.

How has she managed to preserve the voice, I asked, expecting something about genetics and technique. But no, her answer is: "John wasn't keen on belters."

The San Francisco concerts will be the first for Cleo without Dankworth, but she is performing with their daughter, Jacqui, a well-known singer and actress. A son, Alec, is an acclaimed bassist. 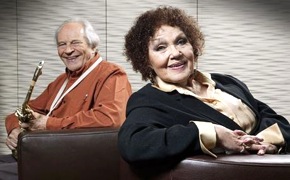 All four of them have mixed jazz and classical music in their careers. Alec's recordings range from Ellington to Vivaldi; Jacqui appeared with the Royal Shakespeare Company and the Royal National Theatre, and also performs and records jazz and pop.

Cleo herself is the only female performer to have received Grammy nominations in the jazz, popular and classical music categories — and have upstaged (gently) Kermit, Miss Piggy, and even the Swedish Chef.

The only sign of age (or perhaps an indication of what's important for her) in a conversation from her Sonoma home: When we talk about her long-running star performances in Sondheim musicals, in triumphant London and New York productions of Show Boat, State Fair, and the Edinburgh Festival production of Kurt Weill's The Seven Deadly Sins, she doesn't remember which was nominated for "one award or another." That would be Sir John Dankworth, clarinetist, Cleo's musical mentor, arranger, "house composer," and husband for a half a century. Dankworth — center of Britain's jazz scene, and composer of soundtracks for The Avengers, Modesty Blaise, and scores of songs using Shakespeare texts — died earlier this year, at age 83. They were music's only "royal couple," he a Knight Bachelor, she a Dame Commander.

Back to the voice and its amazing preservation. Besides Dankworth's dislike for belters, Cleo also cites a comparison with taxing schedules in opera (where Placido Domingo, at a mere 69, is a rarity) and Broadway, where there can be as many as eight performances a week.

She mentions the "ruination" of Julie Andrews' "beautiful voice" during the Victor Victoria engagement when she developed vocal cord nodules, and had to stop singing. During her own long-running musical appearances, Cleo says, she experienced "tired voice ... but no nodes." For which her legions of fans are grateful. 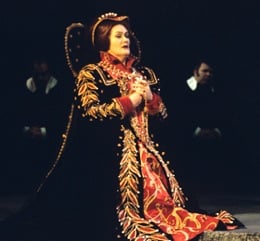 Soprano Joan Sutherland, 83, died Sunday in her home in Switzerland. One of the most acclaimed singers in the contemporary revival of bel canto opera, she was known as "La Stupenda" because of her seldom-equalled vocal acrobatics. (See a tribute.)

Besides the Metropolitan and all major opera houses in the world, Sutherland was a regular visitor to the War Memorial, performing many roles over the years, and making her stage debut in four: Donizetti's Maria Stuarda, Verdi's Trovatore, Strauss' Die Fledermaus, and Massenet's Esclarmonde (a San Francisco production that later made a big splash at the Met).

Sutherland was also teaching and coaching locally in recent years, including a notable Merola master class, described in terms of soprano Svetlana Nikitenko's experience with her:

A highlight of Nikitenko's Merola year was working with Joan Sutherland at a public master class, when "La Stupenda" corrected the young singer's breathing by pressing down on her stomach, showing "in real time" where the air should go and where it should be held in reserve.

Clearly worried, Nikitenko asked: "But when I do run out of air, what can I do?" The no-nonsense Sutherland replied: "Not much." She went on to suggest taking a quick ("but not loud") breath even if the music didn't allow it. "It's a sneaky profession," she said, stupendously. Her young charge breezed through "Die Holle Rache" on Saturday as if she had all the reserve air in the world.

Of Flutes We Sing 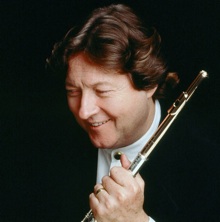 Following up on last week's report on the flute festival in Half Moon Bay, here's another important event with the instrument.

Robert Stallman is giving a recital on Oct. 14, in Le Petit Trianon.

Performing with him are pianist Mark Anderson and Isabelle Chapuis, principal flute of Opera San José, and a Stallman classmate at the Paris Conservatoire.

Stallman was a protégé of Jean-Pierre Rampal, emperor of flutists, who had called him "one of the most gifted musicians I have ever encountered."

No program information has been provided.

Vivaldi did well by the bassoon, but otherwise, it's an instrument rather like the trombone and timpani that don't get too many concertos written for it. 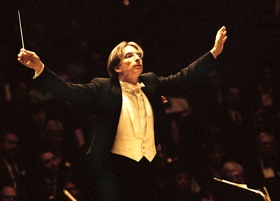 But then there was Thursday night in Davies Symphony Hall, and a standing ovation for Stephen Paulson. A rare event for the bassoon, a rare instance of conductorial misconduct — turned into an element prompting the acclaim. For a complete report on the concert, see Georgia Rowe's review.

Paulson was terrific in the San Francisco premiere of Villa-Lobos' 1933 Ciranda das sete notas, and would have received a well-justified big applause, but a Standing O?

That's where the conductor came in. Michael Tilson Thomas did something I have never seen in decades of concertgoing: With one sweeping motion of the left hand, he knocked the score off the soloist's music stand. In an instant, athletic arc — belying his 66-years-minus-two-months — MTT jumped off the podium, picked up the score, made sure it's at the right place, put it back on Paulson's stand, jumped back on the podium. Conductor, soloist, and orchestra didn't miss a proverbial beat.

Still, obviously there was surprise and tension, and when the piece concluded a few minutes later, MTT expressed his relief by stamping his feet in a musicians' gesture of applause — except that musicians normally sit when they do it, and MTT stood, which meant a strangely appealing, improvised Elaine Benes dance (from Seinfeld). The audience, caught up in all that celebration, had no choice but to rise to its collective feet.

"The quick brown fox jumped over the lazy dog's back."

Don't mind me, I am just limbering up to write. But why include that in this column item about our (beloved) SFS musicians? Because that's what they do. Tune, practice, and noodle. On stage.

As the years have gone on, off-stage tuning became brief on-stage tuning, and in turn long sessions of it, then practicing, and noodling, and — as of now — cacophony on stage between works. When the piano is brought in or the chorus enters, noodling goes on for as long as 10 minutes.

This business started with what I thought to be a minor postscript to last week's report from Chicago:

In San Francisco, making noise endlessly before the concert and in the intervals between performances — even for the long stretches of time when the piano is brought up to the stage — is the unfortunate custom.

Not expecting a response, much less opposition, I was genuinely surprised by messages from audience members and even colleagues apparently enamored of the noise. From former San Francisco Examiner critic Arthur Bloomfield:

Sorry I have to seriously disagree with you on the preconcert noodling. I love it. And I remember the Concertgebouw tuning up thusly in Paris and Amsterdam. I beg you, don't campaign against this! It would take the heart and soul out of a concert.

Not sure if the passionate tone of the note was for real or mock-serious, but there it was, a strong vote for noodling. I responded, semi-seriously, but in a righteous manner:

How did Western music manage for 400 years without noodling?! Did singers of Gregorian chants regularly cough and clear throats in the church before singing? Should actors do gymnastic warmup on stage before beginning? Would you like a few "Quick brown fox" lines on top of reviews, to show how writers limber up their fingers? Should dancers work out at on-stage bars after the curtain is raised?

And, when there is a 10-minute break for the piano to be put in place in Davies Hall, do you really want to hear 80 musicians' cacophony — tuning, practicing ... not only the next piece, but whatever else they may have in mind.

I am pretty sure I heard a few strains of "Hava Nagila" or perhaps its Cuban version, "Havana Gila," between Ravel and Debussy. It's wine tasting with pineapple-and-water between a Cab and a Pinot.

Then another message, from The Wall Street Journal's David Littlejohn:

I'm with Arthur on this one. Orchestras tune onstage to be sure that microminutely tightened strings (and so on) are all hitting the same A in a particular concert hall. There is no comparison with a male choir, a troupe of actors or dancers, let alone a solo performer — like a critic. Every concert piano is tuned for the hall before a performance.

Moreover, I sort of enjoy the half-minute or so of "noodling." It in no way, for me, detracts from the performance that follows, and helps remind me that each performer remains a person.

I had no alternative but to turn to the ultimate authority on proper behavior, Robert Commanday, and he spake the truth:

Considering the level and omnipresence of noise and sheer sound in our society, it is remarkable that a symphony orchestra, dedicated to beauty of sound, would precede its performances with seven to 10 minutes of cacophony, the random practicing by 100 musicians described as warming up.

The tradition here of public practicing is rationalized by the musicians' "need" to warm up. Sheer nonsense. Each musician will have had about two hours playing time during the day. All it takes to warm up wind instruments physically is to blow air through them soundlessly. There is ample room backstage and if necessary, in the adjacent Zellerbach rehearsal facility for last minute noodling and woodshedding.

European and British orchestras make dignified and quiet entrances, as artists, and wait quietly until their concertmaster gives the signal for the sequence of brief tuning by sections. Then there is quiet until the conductor appears. It is classy and artistic.

I am with him, over there, the quiet one.
Back to top

May just as well confess I have no idea about any of this, but the name-dropping is impressive and mystery concerts appeal to some of us. 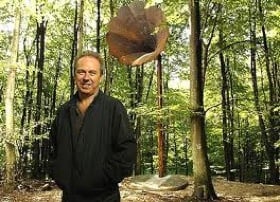 On Oct. 16, the Long Now Foundation is bringing UK artist Jem Finer's Longplayer to San Francisco "for a rare 16.6-hour performance of his 1,000 year-long composition," in Yerba Buena Center.

The event runs from 7 a.m. (don't be late!) to 11:40 p.m., and that's called 16.6 hours by some measure of time unknown to me, but I take their word for it. I am not at all sure what the Longplayer is, but the description says it's played by "18 musicians on a 60-foot-wide, custom-built instrument, integrating both its score and instrumentation — an orchestra of singing bowls."

Finer, a founding member of the Pogues, is "exploring his conceptual concern with problems of representing and understanding the fluidity and expansiveness of time."

The conversation part — with recordings of Stewart Brand, Jill Tarter, John Perry Barlow, Tiffany Shlain, Danny Hillis, and others — is only six hours long, and takes place in the Contemporary Jewish Museum, from 3 to 9 p.m., and also on Oct. 16.