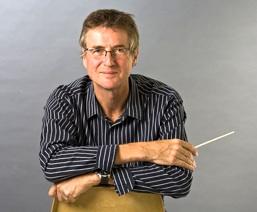 There is a new man in charge of the Carmel Bach Festival, and he has ideas. Music Director Paul Goodwin’s inaugural season — the festival’s 74th — will still have Bach in focus, of course, but seasoned with what Goodwin calls “pepper & spice.”

He is pulling music together in a way that’s “a little bit unusual ... that at first may not make much sense, until you understand where they’ve come from and what they share.” Bach, however, is “everywhere ... he influences everybody ... his music is indestructible, and however it’s presented, it is sensational.”

Goodwin is succeeding Bruno Weil, who has run the festival since the 1991 retirement of Sandor Salgo, a name synonymous with Carmel Bach for 35 years.

An oboist for 16 years, and a leading conductor of early music in many venues since, Goodwin has been championing English music, as well. Under his baton, Baroque composers rule, but also share the stage with such English contemporaries as Ralph Vaughan Williams, Benjamin Britten, and Mark-Anthony Turnage.

Goodwin is opening the Carmel season, July 16-30, with his own new Suite of Sinfonias, a compilation of some of Bach’s finest instrumental sinfonias. They are rarely performed outside their respective cantatas, and certainly not in this combination of “an orchestral suite with contrasting moods and complimentary keys, producing a kaleidoscope of colors.”

He is also inserting into the suite a newly commissioned piece from John Corigliano, the beginning of a fresh tradition of regular commissions. The program continues with two of Handel’s Coronation Anthems, written for King George II, in 1727, and Haydn’s “Der Herbst” (Autumn) from The Seasons.

British influence will be evident in both programming and personnel. The new concertmaster is Peter Hanson, from Great Britain, a founding member of the Eroica Quartet. He will lead a program showcasing string musicians of the orchestra in selections from Vivaldi, Telemann, Mudge (an 18th-century English composer and clergyman), Purcell, and C.P.E. Bach.

The Tuesday main concerts feature Purcell’s The Masque in Dioclesian, Britten’s Suite on English Folk Songs, and other works.

The Sunday main concerts will have Bach’s St. John Passion, which Goodwin promises will be “slightly different, with a unique spatial use of the auditorium and performers.” For the full program, see the festival Web site.

Rufus Wainwright’s Five Shakespeare Sonnets, commissioned by the San Francisco Symphony, was postponed from last year, and it’s due in Davies Symphony Hall Nov. 11-13, but once again, there is a change in plans. This time, it was caused by the illness of Jeffrey Kahane, who was to conduct the concerts. He is being replaced by Michael Francis, making his SFS debut; the conductor is currently in Seattle, appearing for the first time in the U.S.

Francis has a unique history of last-minute substitutions. He first gained notice as conductor when asked to step out of the bass section of the London Symphony and onto the podium for a rehearsal of Shostakovich’s Symphony No. 4. In 2007, he had 12 hours’ notice to replace Valery Gergiev for the

BBC’s Gubaidulina Festival; one month later, on two hours’ notice, he replaced John Adams in a performance of the composer’s works with the LSO at the Philharmonie Luxembourg; and in January 2009, he was asked to replaceAndré Previn in four concerts in three cities, with the Stuttgart Radio Symphony. He will make his New York Philharmonic debut next month.

Kahane was also to be the soloist in the Ravel Piano Concerto in G Major, the work to be replaced by Milhaud’s Le Création du monde. The rest of the program remains unchanged, with the Wainwright work and Kurt Weill’s Symphony No. 2.

Both the War Memorial and AT&T Park are completely sold out, with remote chances of getting a standing-room ticket: $500 for baseball, $10 for the opera (and fire marshals making sure there’s no overcrowding)! On the other hand, the Giants game is on TV, free, and Cyrano is not, not yet anyway.

Petrika Ionesco’s spectacular production from Paris (shipped in 40-foot-long containers) opens, true to Rostand’s play, with a scene in the chaotic, phantasmagoric backstage of the Hôtel Burgundy in the opulent (for some) 17th century. Among the many stage devices in use are huge reflective mirrors, used as portable spotlights in the preelectric age.

In the entire production’s only jarring moment, those mirrors show up again much later, hauled in by men who set them up to focus on the principals. This is the end of the balcony scene, Cyrano winning Roxane for Christian, and he is in agony upstage, while the lovers get married in a hurry ... with the spotlight on them, as if on a movie set. I could not figure out that bit of stage shtick to save my life. 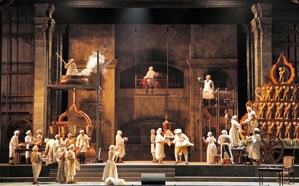 The solution is in the press notes, which say, surprisingly, that Cyrano is “envisioned as the ‘director’ of the love affair between Roxane and Christian,” pointing to the example of the reflective mirrors. Trouble is there are no other obvious instances of "Cyrano-as-director" in the production, so this high-point spoiler comes out of nowhere, counteracting the drama. The press notes — which Micah Standley has written since 2001, after decades of exemplary work by Kori Lockhart — are a guaranteed bonus to any trip to the War Memorial. They should be included in the programs.

For Cyrano, to give one example, it is from the notes that you learn about the nose — “made from cold foam latex ... cast from a mold of Domingo’s nose.” There is information about the swordsmen, dancers, acrobats, even the men rappelling down from the flies (they are stagehands, who also did their spectacular descent in Die Walküre and Girl of the Golden West).

A real surprise is that the food used onstage — there is a lot of it — is real. There is a large, lyre-shaped bread, and even that’s real and fresh, “created for each performance by Kate Good at Thorough Bread and Pastry.” Oh, and the falling leaves at the end: “each contains an electrode connected to a switchboard backstage so that they fall on cue.”

Of Alfano’s music, Martin Bernheimer said it best, in his review of the 2005 Metropolitan Opera production:

Alfano provided neat and gentle [musical] illustrations, never overpowering the text. The score rambles in lush slush one moment, returns to impressionistic water-treading the next. Rare climaxes flirt with Wagnerian thrust. The vocal lines, predicated on parlando, offer limited surprises. Ultimately, the opera decorates the narrative without enhancing it. If this innocuous mélange ends up suggesting movie-music, at least it suggests good movie-music. Like little Oliver, however, we want more.

That Certain Die Walküre on the Air

You can wait until next summer, when this production will be available again, as part of the Ring cycle; or you can tune in to KDFC-FM 102.1 at 8 p.m., Sunday, Nov. 7, and hear the technical wonder of a recording. Or, best bet, you can do both: radio and live next summer. 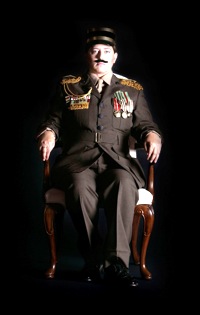 Mezzo Paula Rasmussen will portray the King of Persia, the hero of the 1738 opera, set in 480 B.C.E.

The role of Xerxes, originally sung by a castrato, is now generally performed by a mezzo-soprano or, more often, a countertenor.

His/her opening aria, “Ombra mai fù” (Never has there been a shade), sung to a tree, is one of Handel’s many well-known melodies, familiarly known as “Handel’s Largo.”

- What does selling DirecTV have to do with the Mozart Requiem, especially the Lacrimosa?

- Why no new opera commercial from Honda?

- Rhinegold for Levi’s: another “say what?”

Clarinets By the Bay 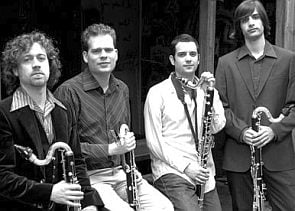 Since the end of the big band era, the clarinet has taken a backseat to its sexier woodwind cousin, the saxophone. But in the Bay Area, thanks to a fertile environment of classically trained clarinetists with experimental sensibilities, the oft-overlooked instrument is having a moment.

“I can’t imagine a better time for clarineting in the Bay Area,” said Ben Goldberg of the New Klezmer Trio. “There are so many wonderful players here now. And it’s only getting better, baby.”

Talented clarinetists such as Cornelius Boots, who after graduating from music school in 1999 wanted to form a bass clarinet quartet, have had their ambitions squelched by the limited repertoire and passion for their beloved instrument. But upon arriving here in 2003 — after getting a tepid reception from potential band members in Chicago — Mr. Boots quickly got his bass clarinet quartet, named Edmund Welles, off the ground. Within a year and a half Mr. Boots had received a composition grant from Chamber Music America. Now, as far as Mr. Boots knows, Edmund Welles is the only contemporary composing bass clarinet quartet in the world.

Barry Jekowsky’s involuntary departure from California Symphony, which he formed and led for all its 25 years, is still making waves. Members of the Young American Composer in Residence Program, started by Jekowsky, have distributed an open letter to the orchestra’s board, making the following points:

Apart from the musicians themselves, few have a closer association with Barry and the orchestra than the Young American Composers in Residence, and this institution holds a very special place in our lives and in the life of American music in this country, and is indeed largely the reason why many of us have the professional opportunities we have today.

We are writing to you united in our request to ask that you reconsider this decision for the health of the orchestra, the East Bay community, and the cause of American music.

After 25 years at the helm, Barry consistently brings new ideas, creative formats, and innovative programming to the CSO, and it has been largely his initiatives that have brought the California Symphony a place on the national stage, something which virtually no other orchestra of this size has succeeded in doing.

Most importantly, his vision of a young composer-in-residency program, and his inclusion of American music on every concert, have had an enormous impact on the programming of new music in this country. It also bears mentioning that the recordings he has made have been heard by so many around the country, and he has had great success raising money for the orchestra in some of the most trying economic times and is the orchestra’s most personable and enthusiastic representative.

Indeed, it has been largely due to his persistent fund-raising efforts on many occasions that the orchestra has even remained solvent.

The abrupt timing of this decision, and the fact that so few board members were present at the meeting, have given the unfortunate appearance of a chaotic power struggle in the local and national press. What a shame for everyone in the California Symphony family to watch this spectacle unfold. It is on all of the orchestra administrators’ radars at the moment across the country, and we have each spoken and fielded questions from them about this.

A swift reversal of this decision would go a long way towards repairing the damage. We hope to be able to continue our loyalty and enthusiastic ongoing affiliation with the California Symphony well into the future.

The letter was signed by Mason Bates, Pierre Jalbert, Kevin Puts, Chris Theofanidis, and John Corigliano, on the YACR Advisory Board.
Back to top

A Pan-Asian Festival of Classical Music 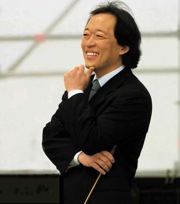 When you see names such as Yo-Yo Ma, Midori, and Myung-Whun Chung, you don’t think “China, Japan, and Korea,” but rather their excellence as performers of classical music.

But now, they — along with Sarah Chang, Tan Dun, the China and Seoul philharmonics, and the Shanghai Symphony — are all converging in Guangzhou (Canton), for the first Canton Asian Music Festival, Nov. 5-17.

It’s taking place during the 16th Asian Games, the second-largest sport event next to the Olympics. The festival, created under the artistic directorship of Long Yu, is the first high-profile showcase for world-renowned Asian artists in Asia.