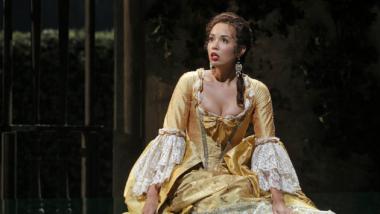 Nadine Sierra: For the Love of Opera

If soprano Nadine Sierra ever goes missing, the best places to search are likely the back hallways of any opera house, especially where the old-timers hang out, or a county jail.

“When I was 10, I knew for certain I was going to be an opera singer. We had a VHS tape from the library of La Bohème, the 1982 Franco Zeffirelli Metropolitan Opera production. I watched it every day for a week,” recalls the 27-year-old Florida native who’s fond of hanging out with veteran opera singers. “My mother never returned the video. Yes, I’m admitting we have a stolen library tape.”

The violation is sure to be forgiven or forgotten by audiences in the Bay Area who admired Sierra’s rapid rise as a 2010 Adler Fellow during an apprenticeship with San Francisco Opera’s Merola Program. Following her 2011 company debut performing  dual roles in Christopher Theofanidis’s 9/11 opera, Heart of a Soldier, Sierra’s subsequent trajectory has led to return performances with the S.F. Opera. She has appeared at the 3,146-seat War Memorial Opera House as Papagena in The Magic Flute (2012); Musetta in La Bohème (2014); and Countess Almaviva in Le Nozze di Figaro, Lucia in Lucia di Lammermoor (as a last-minute replacement for Diana Damrau), and Pamina in The Magic Flute (all in 2015). During the 2015-2016 season, Sierra debuts at the Opéra National de Paris, Metropolitan Opera, La Scala, and Berlin Staatsoper.

“I have to say, my favorite role is Gilda, from Rigoletto,” Sierra says in a phone interview. “When I listened to it the first time, it just felt like I had done it before. It took me only a week to learn it. It felt like a glove, a perfect fit.”

Sierra was 23 when she debuted the role and still finds new treasures in Gilda. Performing it in what was her European debut with Italy’s Teatro di San Carlo in 2013, the cultural surroundings enriched the experience. “Talking with the men in the chorus who have been there for many, many years, I absorbed memories they had of the role.”

Conversations about favorites quickly diffuse into other, equally passionate recollections: memories of feeling agonizing loss when Mimi died on that long-loved video. “She’s special because she’s not a glamorous opera character. Mimi’s a woman who finds beauty in the smallest things. She’s a poet. I felt the loss like it was real.” And there are cravings: “I’d like to give the roles I play more life, more of a realistic quality. The thing that comes first is the singing, but at the same time, I love it when I can really let go and act — show complexity as opposed to surface,” she says.

Aiming for vulnerability and honesty in roles that stretch her acting skills and detailed, sophisticated, vocal interpretations of each libretto exposes Sierra to criticism. “I’ve read in reviews that my voice is too small for the (War Memorial) opera house. In some cases, that could be true, but in San Francisco, it’s singer friendly to only a minority of singers.” Independent of specific location, Sierra says she sometimes thinks her voice is “soft-grained and silvery,” but lacks the “ping” or strident quality of other sopranos. “I try not to let that get into my head when I’m singing. If critics say the voice is too small, I’m sorry. I’ll never be able to change that. I’m just grateful to have places to sing.”

Sierra handles the pressures of being a performer using skills she developed as an Adler. “I’m always first to grab community. The conductor, the singing partners — like (tenor) Piotr Beczala during Lucia. Even audience pressure, I resist. They just want a moving, well-sung performance.”

During her return visits this fall, Sierra says she’s enjoyed meeting new Adlers and offering encouragement. “There are so many things I learned as an Adler fellow. The main singers treated us like we were already professionals and included us in everything. I met different artists during my time and that’s where I got my sense of community. They and the directors created that atmosphere. I still hang onto that.”

Recently, Sierra and her voice coaches (and critics, judging by reviews) have noticed changes in the coloration of her voice. Her tone has grown warmer; not adding heft, but darker and more resonant. “There was a time in my early 20s when I couldn’t hold pitch well. I was going flat,” she says. “All of that settled when I found how to support more as my voice became bigger.” Her stamina improved simultaneously, allowing her to sing demanding roles without needing days of rest after each performance. “Singing Lucia, after it was over this time I felt fine — like I could sing it again right away.”

Looking to the future — not solely her own, but opera’s — Sierra says productions that make the art form “relatable” are a good idea, but not if concept outweighs story. “When I see a story being told to me visually, not audibly, I’m confused and I don’t want to be confused. I don’t want to have to read the mind of the director. I think directors today are getting ahead of themselves in thinking they have to recreate the story and get more psychological about it. It makes people turn away. If nobody understands it, nobody is going to want to see it.”

Instead, she says effective opera is comprised of singers who will “go the distance” and productions that highlight the beauty of human beings, with all their complexity and vulnerability and even simplicity. “That’s what touches us. You don’t need grand operatic design to make a tremendous impact.”