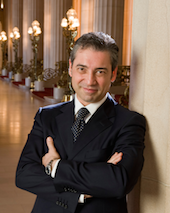 A few days ago word broke that Nicola Luisotti, San Francisco Opera's music director was resigning his other post at the Teatro San Carlo, Napoli, after only two-and-a-half years in the job. His message, released yesterday, is, like the man, courteous and diplomatic, giving as his reason the fact that “all of the engagements previously accepted unfortunately do not allow me to be as close to this marvelous theater as I would have wanted.” Luisotti is canceling all his planned performances with the company except for the opening night Trovatore on December 12. He expressed a wish that he might return as a guest conductor.

Luisotti brought some of his Neapolitan forces to join the chorus and instrumentalists of SFO at the War Memorial Opera House last October for a memorable performance of the Verdi Requiem. It was clear that then that he had infused the same energy and disciplined music making at the San Carlo that characterize his San Francisco performances. He has as many fans there as here and he recognized them in his message. “I thank my public, who throughout this brief period supported and loved me.” And, of course he thanked the musicians.

Neapolitans, and many opera-loving Italians, will naturally not see this event in isolation but as part of a chain which includes Riccardo Muti's recent, highly publicized departure from the Rome Opera and Gianandrea Noseda's break from Turin. Although each maestro had his own reasons for leaving, it's hard not to see the wave of bad news as part of a story involving the unstable state and local funding for the arts currently in Italy along with labor strife and the charges of incompetent management, which have always dogged Italian opera houses .

In the particular case of the San Carlo, it began with a budget shortfall in January, which triggered an unusual Commission charged by the local arts minister with looking into the situation and making sure city monies were being well spent. Arts reporter Dinko Fabris reports in the Giornale della musica, that the Commission is “almost concluded without apparent solutions, except for the exit of the publications manager and the choral director.” Fabris added, caustically, “we all hope that this uproar will prevent new games of the political underworld, which remembers the lyric foundations [the opera houses] only when choosing lazy people [to fill management seats.]”