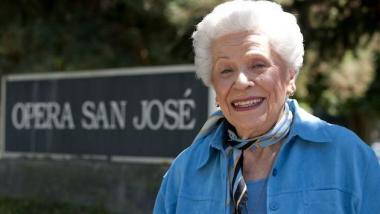 Irene Dalis, a great star of opera, who has been the founding and commanding grand dame of Opera San José for the past 30 years, died on Dec. 14 after a long illness from injuries suffered in a car accident. She was 89.

On stage — at major houses in Europe and the U.S. — and as a successful company director, as well as in her personal contacts, she had Presence with a capital P, and she projected certainty, authority, and power.

Many years ago, during a quick interview outside her old company venue, Dalis was smoking but did not want to impose it on people in the office even before the law required that. I saw people — company members and strangers — walk by us both stealing a glance at this celebrity and being careful not to look directly at her. Turandot did not fit her voice, but she could have embodied the princess' dual personality in both acts just by standing on the stage.

Larry Hancock, her closest assistant and supporter for many years and her successor as SJO company director, once told the Mercury News of Dalis' "Lady Macbeth laser beam, which she could turn on at any moment." Dalis told Richard Scheinin: "I'm half Greek, half Italian; most people know what I'm thinking before I even say it." When she turned over Opera San José to Hancock last summer, she warned: "I'll be watching; the hardest thing for me now is to keep my mouth shut."

- After she sang her first Kundry (in Wagner's Parsifal) at the Metropolitan Opera in 1961, a mezzo performing a nominally soprano role of great vocal and dramatic challenges, Dalis was hailed for "her tonal richness and fiery dramatic presence," and then invited the next year by the Bayreuth Wagner Festival to sing Kundry there, the first American singer to have the distinction.

- Four years ago, when she was a terrible car accident, which broke her leg, Dalis — then 85 — not only embarked on an intensive course of rehabilitation to walk again, defying doctors' predictions, she also assured everybody that she can handle the physical aspects of the injury, her only regret is that the accident was not caused by a billionaire "because then I wouldn't have to worry about the company."

Her creation and management of Opera San José was admired far and wide. One of the most respected opera company Directors, San Francisco's David Gockley, told SFCV that he had great regard for Dalis both as a performer and fellow company director:

A great lady! She had a wonderful career and then founded a repertory opera company in San Jose that went against the grain of typical regional companies. The quality of its performances was at a consistently high level. She will be sorely missed.

Dalis hailed from the South Bay city, graduating from the predecessor of San Jose State University in 1946, preparing for a career as a pianist and teacher. She received her master’s degree in music education from Columbia University Teachers College, and on a Fulbright scholarship went to Europe to begin her singing career.

She made her debut in 1953 in the small German regional house of Oldenburg, and was immediately given a two-year contract. Performances and acclaim followed in Berlin, and elsewhere in Europe, until her Metropolitan Opera debut as Princess Eboli in 1957.

The Met embraced her, and although she sang in many major venues, including San Francisco Opera, the New York company was her home for 20 seasons, Dalis singing in 274 performances, famous for her Amneris in Verdi's Aida and Brangäne when Birgit Nilsson sang her first Tristan und Isolde at the Met.

Starting in San Jose's small Montgomery Theater, Dalis' company had both critical and popular acclaim, while she managed not only to keep the company afloat among opera's treacherous fiscal challenges, with 20 seasons in the black, but oversaw the move to the reconstructed 1,100-seat California Theatre a decade ago.

For the first time after 20 seasons, OSJ had a real orchestra pit (allowing performances of operas with a large orchestra and assuring musicians of more employment), backstage and rehearsal facilities.

Besides excellent productions of classical and new operas, Dalis' company also nourished a generation of young singers, getting their advanced education and performance opportunities there.

Dalis' financial and management acumen was acknowledged by Charity Navigator, the nation’s largest independent evaluator of nonprofits, giving its highest rating in the country to Opera San José, praising the company for its "efforts to operate in the most fiscally responsible way possible."

Dalis is survived by a daughter, Alida Loinaz of Baltimore, and two grandsons. She was widowed in 1990, when her husband, George Loinaz, a book editor, died. Date and place for a memorial service will be announced soon.