Out of Austria, Out of Africa 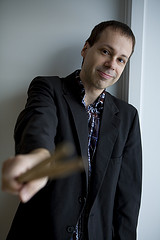 Lukas Ligeti was auditing an ethnomusicology class at the University of Vienna when the professor, Gerhard Kubik, a well-known figure in Afro-ethnomusicology who’d studied the music, language, and culture from the inside, played the class a recording of traditional music of Uganda. Ligeti was transfixed. “It was such adifferent way of thinking about rhythm” than his decade of conservative compositional training at the cradle of European classical music, Ligeti recalls in almost the same words Philip Glass used to describe his transformational encounter with Indian music in the early 1960s, which led to his minimalist style.

Not that Ligeti ever had a narrow view of music. After all, he is the son of one of the 20th century’s most adventurous composers, György Ligeti. His father had never pushed Lukas into a musical career, but he did transmit his fascination with music from beyond the classical mainstream. Today, those formative experiences have made Lukas Ligeti one of the rising stars in music that cheerfully crosses what used to be boundaries of genre, culture, and geography. One of the many manifestations of those explorations alights in the Bay Area on Wednesday when Ligeti’s ensemble, Burkina Electric, performs at Yoshi’s in Oakland.

Despite his paternal musical legacy, Lukas came to music late. After the obligatory childhood piano lessons, he didn’t return to playing music until taking up jazz drumming (where he could make mistakes without standing out too much) when he graduated from high school. Like many other young musicians of the time, Ligeti was intrigued by the advent of electronic pop music and experimented with it while studying composition at the university.

Around the time Lukas started banging on drums, his father — a disciple of Bartók and Kodály who inherited their affinity for “ethnic” folk music, including that of his native Transylvania — was looking outside the Western tradition for inspiration. That involved playing some African music around the family’s home in Vienna, where the Ligetis had settled after escaping Soviet repression of the Hungarian uprising in 1956.

“The world is becoming smaller and it’s anachronistic to be stuck in one tradition.”

After his college African epiphany, the younger Ligeti began incorporating some African elements into his compositions, and so he jumped at an opportunity to experience the music firsthand in 1994, when a German cultural center, the Goethe Institute, invited him to join some musicians in Ivory Coast in a multicultural project combining electronic music and traditional African sounds. The institute paired him with a much more experienced electronic musician, the German synth-punk Kurt “Pyrolator” Dahlke, from German new-wave pioneers D.A.F., and the two arrived to find 150 or so eager would-be collaborators. To whittle the number down to a manageable size, Ligeti started playing the most difficult avant-garde electronica he could think of, which frightened away all but a dozen or so, and the entire group eventually formed an African band called Beta Foly. They were later joined by guitarist Wende K. Blass and vocalist Mai Lingani from nearby Burkina Faso.

Ligeti found his diverse musical wellsprings surprisingly complementary. Metaphorically, the basic binary (on or off) pulse of digital music meshed well with African beats, while the latter’s immensely sophisticated rhythmic systems, unencumbered by measures, enriched the typically monotonous beat of so many electronic dance forms. There are similarities in the custom-made instrument-building tendencies shared by many African and electronic musicians; both tend to resist standardization. And he found African musicians to be open-minded about trying new influences.

Ligeti also found that African music contained riches undreamed of in the Western classical tradition he studied in college. “I come from Europe originally and have a European music education,” Ligeti Explains. “But I have as much of a history with African music as I do with Western, because I come from both of those areas at the same time. So I’m not a Euro-centrist.” He cites multicultural music predecessors such as Colin McPhee and Lou Harrison’s channeling of Indonesian music, and he hopes to do the same for African music, which has received less attention from Western classical composers.

“The world is becoming smaller and it’s anachronistic to be stuck in one tradition,” Ligeti says. “It’s a matter of taking these elements and not just imitating but integrating them in a way that the sum is greater than the individual parts. I try to do that.”

“I also find African forms beautiful melodically, and in a lot of contemporary classical music, that’s something I miss.” 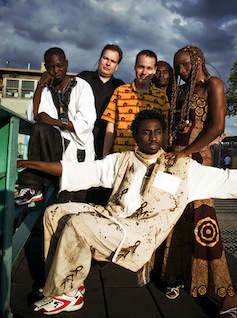 Beta Foly set Ligeti on his path to an African-Western, classical-electronic fusion, yet he craved more experience with electronic music. He decided to move to the U.S., where he thought his experimental, improvisatory inclinations might find a more welcoming home than in Austria. Fascinated by New York City’s celebrated downtown music scene, which had spawned adventurous musicians such as John Zorn and Bill Frisell, and drawn to the city’s aesthetic diversity, he settled in Brooklyn in 1998.

Ligeti resisted the usual electronica setup, in which musicians spend their stage time fiddling with laptops and other equipment. It’s tedious to watch, he thought, so he sought an instrument that would let him play more demonstratively. Ligeti’s African experiences had showed him the value of the close connection between music and movement found in most traditional musical cultures and too often abandoned by Western modernist composers.

He located an electronic instrument called the marimba lumina, a MIDI controller that lets him use mallets to trigger sampled electronic sounds. He began performing in New York. Some of that music, recorded a dozen years ago, was released this past spring on his album Pattern Time.

But Ligeti’s African muse still beckoned. In 2004, he returned to Africa, thanks to an Austrian organization that asked him to combine traditional music of Burkina Faso with the electronica he’d been developing in New York. Enlisting the assistance of three of his old Beta Foly colleagues — Pyrolator, Mai Lingani, and Wende Blass — he turned the project into the band Burkina Electric.

Although Burkina Electric’s music superficially resembles Afropop, it’s actually quite a departure from the mainly West African and southern African sounds that dominate that genre. “Because of Burkina Faso’s central location in Africa, a lot of different cultural areas come together and collide,” Ligeti explains. “That cross-pollination makes it a conducive place for cultural exchange.” Many city street corners boast live music, while big bands play in large outdoor clubs. Burkina Electric imbibes from all these sources, both the older, traditional Burkina Faso music and the newer contemporary Afro-Pop sounds from Ghana, Senegal, and beyond. Although still grounded in Central African styles, the band’s sound now incorporates pan-African influences, ranging from Congolese rumba to soukous to southern African embalak and township jive.

“There’s so much to like about African music,” Ligeti says. “It provides both emotional and intellectual satisfaction. It’s all in there. In Burkina Electric, we combine that with the electronic possibilities of dance music and the DJ culture vibe. Now that we’re at a moment when a lot of these boundaries between and classical and pop and rock have broken down, we can be inclusive, but we try not to water it down.”

At Yoshi’s, Burkina Electric will be missing the contributions of Pyrolator, whose family obligations will prevent him from touring. The remaining quintet has been reworking material from its acclaimed 2010 album Paspanga (meaning “Cantaloupe”), and may even showcase some new music, as well.

Burkina Electric is only one of Ligeti’s many projects, and probably the most pop-oriented. He’s writing a marimba piece, a string quartet, and a chamber orchestra work, and he’s just returned from Lebanon, where he was researching his contribution to a multimusician project about Arab music. This winter, he’ll head to India for yet another collaboration, and meanwhile he’s working (mostly long distance) on a doctorate in music at a university in Johannesburg. In his musical peregrinations, his embrace of pop and electronic as well as classical music forms, and his deep study of non-Western as well as classical musical cultures, Lukas Ligeti exemplifies a generation of musicians who are making striking, original sounds by drawing from what Bay Area composer Henry Cowell called, almost a century ago, “the whole world of music.”