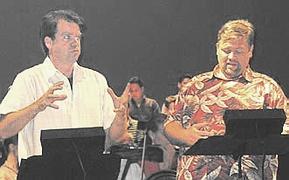 The eight principal singers, with their craft and significant experience, did much to compensate for that problem. Zheng Cao has sung six major roles with San Francisco Opera. Bass-baritone Bojan Knezevic, admired in his five major parts for the S.F. Opera, sang the role of the serving-man Davy with a strong, lusty fervor. He was also Henry IV, of an earnest dignity, his rich, deep voice conveying nobility. Tyler Nelson, a young tenor living in Florida, did a captivating number on Justice Shallow. His diction was impeccable and his animation as the silly, ridiculous squire won for him alone laughs that were independent of the lines. His bright, keenly focused, vibrant tenor invites Mozart. He has a big future. Michael Dean played Falstaff's "lieutenant" Pistol, not as the scruffy rascal seen in the play but, in Getty's view of him, as an "important" stalwart show-off and a kind of herald. Dean's robust, resonant baritone was commanding, with a full and focused sonority. Mischa (for Michel) Bouvier, a young American baritone with an extraordinary and varied background for his years, has a firm, finely directed sound with a distinctive fast vibrato. He used it excellently as a lively Bardolph with a cockney accent. The part of the page, called "Boy," was sung by Robin Massie in a star-bright and shining high soprano, a lively persona. In the earlier Albuquerque performances of May 10-12, the part of Prince Hal/Henry V was sung by great trouper William Lewis, riding a distinguished career. He gave it a fervency, authority, and projection for which he's always been known. The New Mexico Symphony and its fine 100-voice Symphony Chorus (Roger Melone, director), gave just the last four scenes of Plump Jack, beginning with Pistol's announcement of Henry IV's death and Hal's succession. It was a strong performance, but entirely different from that in Mazatlán, because of the larger forces used and the scale of the attractive Popejoy Hall, some three times the capacity of Mazatlán's 800-seater. (The Angela Peralta Theater is a miniature La Scala, with three tiers of iron-filigree-faced opera boxes embracing the orchestra seating.)

Guillermo Figueroa, in his sixth year leading the New Mexico Symphony, has come to conducting as a second career (earlier he was the Orpheus Chamber Orchestra's founding concertmaster, then violist with the Emerson Quartet). He has one of the more elegant techniques you'll see today — calm, refreshingly undemonstrative as he conducts the phrase, not so much the beat. Next spring Figueroa will be one of the Berkeley Symphony's guest conductors, and also will conduct Symphony Silicon Valley in San Jose. After a clear performance of the Getty's four scenes, he led Tchaikovsky's Romeo and Juliet, Fantasy-Overture, in a highly musical reading. (There's nothing much he or any conductor can do about the piece's tasteless slam-bang ending.) Then followed Respighi's Pines of Rome, sensitively done, atmospheres nicely shaded and shaped. The organ was a big help in the later going because the hall's poor bass response seriously undersells the cellos and basses. The solo trumpet, John Marchiando, was first-rate, and James Shields' floating clarinet solo in "The Pines of the Janiculum" utterly beautiful. Naturally, "The Pines of the Appian Way," the finale of finales, with extra brasses in side boxes, brought down the house. Returning to the principal matter, Plump Jack, the premiere of what Gordon Getty regards as essentially the final version, was performed four times, staged, at the University of Texas at Austin in the third week of April preceding the Mazatlán concert performance. Next, it will be recorded, perhaps after more fine-tuning. Of course, it's an entrepreneurial investment for him, but that's no different from the self-publishing that authors do regularly today. Shakespeare gave Pistol words to describe the history to be played out during Henry V's new regime: "the kingdom for a stage." That might well be Getty's view.
Robert P. Commanday, founding editor of San Francisco Classical Voice, was the music critic of The San Francisco Chronicle from 1965 to 1993, and before that a conductor and lecturer at UC Berkeley.