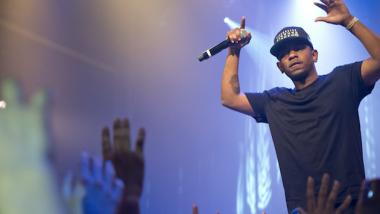 In the wake of the announcement that rapper Kendrick Lamar had won the Pulitzer Prize for Music, the invaluable Washington Post critic Anne Midgette tweeted “I imagine there will be weeks of handwringing in the classical music world about this year’s @pulitzerprize to Kendrick Lamar, but not from me – I think it’s great. Let’s have prizes reflect the world we live in and ALL the music.” Amen to that. The Pulitzer committee belatedly acknowledged that the sensibilities of non-classical listeners matter, and that great music comes in a variety of genres.

It won’t get enough attention, even in the classical music world, but there are a significant number of big name classical musicians who will be happy about Lamar’s prize. I imagine these might include many if not most of the millennial generation of musicians, of all backgrounds and ethnicities, who grew up with rap.

In Slate, one of the composers who lost to Lamar, Ted Hearne, said this of the rapper’s win: “Kendrick Lamar’s music is super important to me and to a lot of people. Hip-hop as a genre has been important to me as a composer, but Kendrick’s work in particular. He is such a bold and experimental and authentic artist. He’s one of the people that is creating truly new music.”

That’s not to say that the heated “OMG” reactions won’t be heard. On the internet, people have been trolling for these over-the-top “end of civilization rants” and have been rewarded with dozens of pretty egregious ones. Like this: 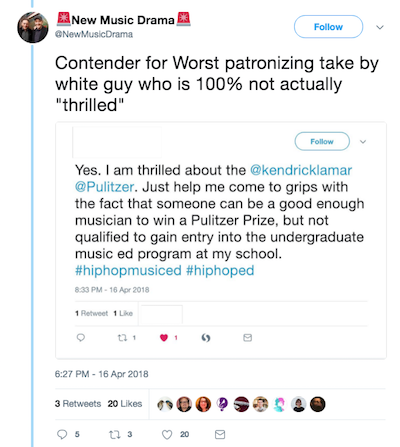 But the writers of these opinions probably know that they’re swimming against the tide.

Since that is the (well-known) case, what’s the real problem with Kendrick Lamar winning a Pulitzer? Beyond the “rap isn’t music” idea, which is just an intolerant version of “I don’t like it,” and the blatant racism that always shadows black achievement – others are far more qualified than me to comment on that – there’s a discomfort with mass-marketed music in general in classical music. The objection is that record companies and mass media organizations are just interested in selling a product and therefore that homogenization and “dumbing down” are the rule.

As with most caricatures, this one has a kernel of truth. It’s undoubtedly true that the mass music industry rewards simplicity and conformity and always has. And to the extent that Autotune and computer-generated grooves take over from real musicians and actual live performances, we should rightly be appalled.

But from Scott Joplin to Duke Ellington to James Brown to Kendrick Lamar there have always been musicians who are able to churn out hits and exist within an industry mainly interested in “product” without losing their individuality and artistic seriousness. That’s just a contradiction that we have to understand as part of our world since the birth of Tin Pan Alley (and, to a limited degree, earlier, in Italian opera, for example.) By this argument, the unquestioned primacy of 32-bar song form and the restricted range of a song’s subject matter should have stunted creativity in the early 20th century, but instead we got a golden era of American popular song. Go figure.

The aesthetics and imperatives of classical music and the musics it coexists with have been changed permanently by the creation of a mass market for music and lately, by hip-hop music. It’s this realization that led the Pulitzer committee to consider rap in the first place, and to pick jurors, like jazz violinist Regina Carter, who are competent in genres beyond classical. Without sincere engagement with the world – without acknowledging that the classical tail can’t wag the music dog – there’s no purpose to handing out a Pulitzer in music anyway. That’s the burden of Frank Guan’s opinion in Vulture, “Classical music, and contemporary classical music especially, registering not at all in a landscape of American music determined by pop sensibilities filtered through recording conglomerates, the music Pulitzer was an obscure bauble coveted only by the people who cared about it, of which there were not many.” The music Pulitzer has been so sidelined that Dotun Adebayo, in The Guardian could write an article with the title “If we valued black art, Kendrick’s Pulitzer would have been for literature.”

Kendrick Lamar’s Pulitzer win, coupled with other mainstream awards for rappers, like LL Cool J receiving the Kennedy Center Honors and, relatedly, Bob Dylan’s Nobel, represent the belated acknowledgement that we live in an era of irreducible artistic diversity. If you happen to be among the classical musicians who see that as a source of strength, it’s time to celebrate another wall coming down.

New albums show contemporary musicians and groups can do rock and folk and classical well.