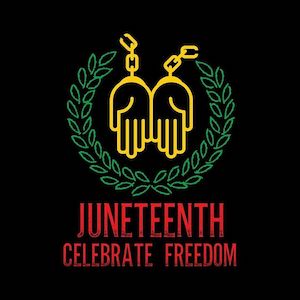 Juneteenth arrives this Friday and will almost certainly be commemorated with more marches in the never-ending pursuit of justice for African Americans and all people of color. Here are a few bits of listening to memorialize the day and this time, as well as a reminder of some seminal musicians who, among many others, have built an American musical identity.

We begin with a full opera, We Shall Not Be Moved, music by Daniel Roumain, libretto by Marc Bamouthi Joseph, and directed by Bill T. Jones. It’s about teens discovering the house of the MOVE organization, destroyed in a police bombing that also set surrounding buildings afire.  Philadelphia Opera presented this piece in 2017.

Oakland Symphony partnered with its Chorus, youth orchestra, and its MUSE education program in this version of Bill Withers’s classic “Lean on Me.”

The Color of Music Festival in Charleston, South Carolina produced this video with an excerpt of their performance of William Grant Still’s Symphony No. 1, “Afro-American” with a montage at the end.

Former UC Berkeley composition faculty member Olly Wilson was a genuinely great, if overlooked composer whose resolutely modernist musical language was tied to an encyclopedic knowledge of jazz and the black music of his time. His “If We Must Die,” from the song cycle Visions and Truth is raw with emotion and this performance by the New Black Repertory Orchestra, with Donnie Ray Albert, baritone soloist, captured on Albany Records does it full justice.

Muhal Richard Abrams died in 2017 and was an exceptionally gifted pioneer in jazz and experimental music. While I would recommend his breakthrough 1968 Levels and Degrees of Light, I thought a more gentle and topical piece might be his solo Peace on You.

There is a fine documentary of Nina Simone on Netflix right now. Look that one up, but in the meantime, here is video of her singing “Wish I Knew (What It Means to be Free).”

On Friday, you can tune in and participate in a performance of Pauline Oliveros’s groundbreaking Heart Chant.

And for the grand finale, here is Oscar Peterson and his trio performing Hymn to Freedom.

I just found this on YouTube and you have to hear it. This is The Aeolians of Oakwood University, Huntsville, Alabama  under their inspirational director Jason Max Ferdinand. It's just a 30-minute concert for the American Choral Directors Association meeting,, but for stylistic range, attention to detail, and emotional uplift, it's a full meal. It helps that they're joined on one number by Cedric Dent, an alum and a founding member of the amazing vocal group Take 6, but this is a great college choir and the selection of music and the performances are as fresh now, as they were on Feb. 22, 2019 at the Kauffmann Center for the Arts.

Recommended: Music We Think You Should Listen To

Fantastic performances from a week spent strolling the internet.

Recommended Streaming From the Interwebs

Timely music for an unquiet time.