Mario Suraci would never have thought to claim the title for himself, but many of his musical peers will remember the bassist as the world’s most interesting (jazz) man. A consummate musician whose seven-decade career included long-running work with Bernadette Peters, Broadway show pit bands, tours with Shirley MacLaine, concerts with Frank Sinatra, Morgana King, Hampton Hawes and Joe Pass, and two years in Las Vegas accompanying Elvis Presley, Suraci died from natural causes at his Castro Valley home on January 9 at the age of 92. 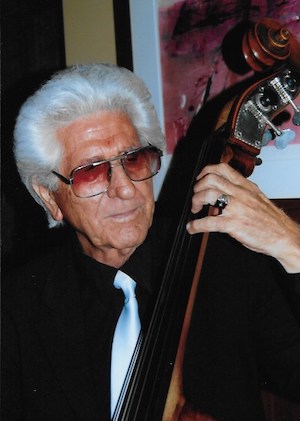 Known affectionately as “The Commodore,” “The Silver Fox,” or “Mario the Great,” he was a mainstay on the Bay Area music scene until failing eyesight forced him into retirement several years ago. He could have thrived in New York City but was loath to move away from family and friends, or to give up sailing on the San Francisco Bay. In New York, Suraci (pronounced sir-ah-chee) probably would have had trouble finding space for the European sports cars that he loved to rebuild (the British Museum purchased an original MINI Cooper that he restored). He also flew airplanes and gliders, raced speed boats, and completed the professional Formula-2 race circuit in Europe.

While he loved speed, Suraci never pushed the time on the bandstand, or sweated getting to a gig on time. With his sharp reading skills and easy-going confidence, he was the one of the elite cats who got the call when a presenter needed to assemble a band for a nationally touring artist. Veteran soundman Lee Brenkman got to know Suraci while working at the Great American Music Hall in the 1970s, and quickly came to respect the man and his musicianship.

When the venue started presenting jazz masters like Teddy Wilson and Joe Pass, “Mario was frequently the bass player of choice,” Brenkman said. “He showed up with right attitude and was able to keep up with the big guys. If there was a rehearsal, he’d be there, and then if the show was at 9 p.m. he’d walk in 8:45, properly dressed, amp on a wheel truck. At 9 he was ready to play. He had other things to do, restoring cars, fixing the rigging on his boat. He was a polymath and inventor.”

In the 1970s he and drummer Tom Duckworth, a longtime rhythm section partner with strong electronics skills, created AXE (Artists Exponent Engineering), a company that designed and built sound gear for musicians and studios. A signature product was a battery-powered direct box, or preamp, with a line-level XLR output that allowed musicians to plug a bass or electric keyboard directly into the mixing consul. They often developed gear to address the sound problems they faced playing in elaborate touring stage shows with acts like Shirley MacLaine and Ann-Margret, gear that Quincy Jones, Prince, and Stevie Wonder bought for their studios.

“If he hadn’t been a musician, Mario would have been a professional race driver or on a Formula 1 crew,” Duckworth said. “My wife’s brother is a well-trained car mechanic. He’d go to Mario to figure stuff out.”

His technical acumen impressed his peers, but it was Suraci’s warmth and charm that made him such a widely cherished figure. When news of his passing started circulating on social media, fellow musicians immediately started sharing stories about working with him.

Jazz pianist Ellen Hoffman recalled a gig about 12 years ago at Anna’s Jazz Island in Berkeley, the last time they played together. She brought several arrangements of Duke Ellington pieces that featured drummer Eddie Marshall on soprano recorder. “Mario said very nice things about my arrangements, and urged me to keep writing, saying that he had played a lot of Duke Ellington arrangements over the years, but never any featuring recorder,” she recalled.

His friendliness didn’t mean he was a pushover. He attained near legendary status among his peers for firmly resisting the disrespect and mistreatment too often casually meted out to musicians-for-hire. If a socialite told him he had to take his bass around to the back door when the front door afforded the easiest route to the performance nook, he’d calmly inform her that he was no longer on the gig. 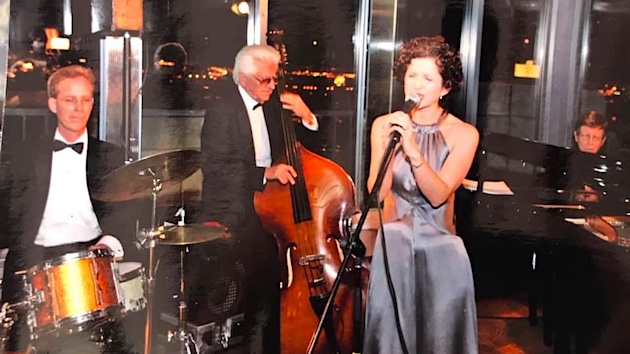 His uncanny knack for arriving five minutes before a show started led to a widely shared story about rolling up to the Fairmont Hotel for a performance with the Walt Tolleson Orchestra. The catch was that the gig required wearing a rabbit suit, and as Suraci entered the ballroom the panicking Tolleson snapped with a profanity that he had five minutes to get into costume. Doing an about face, Suraci replied over his shoulder, “No, you have five minutes to find another bass player!” Various versions of the story still circulate widely, told by players who treasure a blow struck for the dignity of musicians everywhere. The fact that the tall and lean Suraci cut a figure like a Roman centurion added to his gravitas.

“My wife said that he was so handsome that he looked like the hero in a romance novel and that his profile was like one on a Roman coin, no matter which angle you looked at him from,” Brenkman said.

One reason he wasn’t better known by the general public is that he didn’t pursue leading his own bands for recording under his own name. The most illustrious session in his discography was from a 1975 duo concert at the Great American Music Hall with the great jazz pianist Hampton Hawes that Concord Records released in 1983 but never reissued on CD. A bootleg of a 1974 Great American concert with jazz guitar maestro Joe Pass (and drummer Glenn Cronkhite) is available via Wolfgang’s.

Suraci recorded several albums with trumpeter Mike Vax’s orchestra, a Sophie Tucker tribute with vocalist Pat Yankee, and the francophone jazz project Paris Blues with singer Raquel Bitton. He’s probably best represented on album with pianist Dave Miller, who featured Suraci in his trio for almost two decades. He recorded three albums with the bassist (2008’s Everything I Love is my favorite), and often designed his arrangements around Suraci’s propulsive lines.

“We got together by happenstance when my regular bassist couldn’t play at the last minute,” Miller recalled. “Mario showed up two minutes before the gig. I found out later that it didn’t matter what the traffic was or how far he had to drive. He had this remarkable ability to walk in five minutes before the gig started. I called the first tune and I hear this locomotive behind me. He takes his first solo and it’s filled with this beautiful melodic sense.”

When Miller’s daughter Rebecca DuMaine relocated from New York City to the Bay Area in the midst of transitioning from acting to singing, his trio with Suraci and drummer Bill Belasco became her working band. She recorded three delightful albums with the group, most recently 2015’s The Consequence of You. Suraci became a mentor and coach who helped her refine her approach and repertoire.

“He really pushed me: What’s your sound? What do you want to be?” said DuMaine, who’s dedicating her upcoming album to Suraci. “It was a little bit terrifying. Here’s this guy who’s played with Frank Sinatra, pushing me and supporting me. It was my best learning experience.” 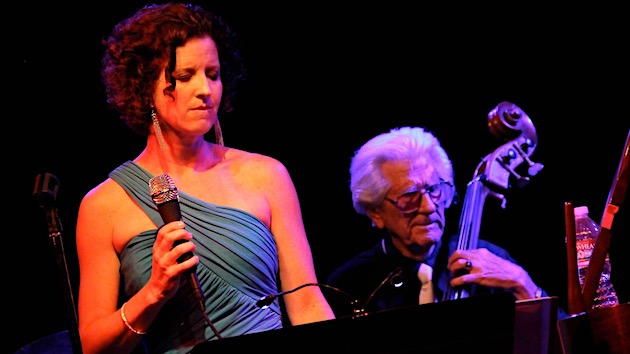 Suraci’s parents were Italian immigrants, and he was born and raised in Oakland. A gifted young violinist, he switched to bass in high school. Enlisting in the Marines in 1950, he was caught up in the Korean War and was with the First Marine Division at the brutal battle of Chosin Reservoir in the winter of 1950. Returning to the Bay Area after mustering out, he attended San Francisco City College and quickly established himself as a player capable of meeting just about any musical challenge.

He was preceded in death by his wife Carol and his son Vincent. He’s survived by his daughter Angelia and his life partner Daphne Lewis of Santa Cruz, her three children (Michael, Kelley and Paul), five grandchildren and a great grandchild. The family is planning to hold a celebration of his life later this year when the easing of the pandemic allows.

After more than six decades of generously sharing his unique performing and compositional talent, and a bright and ingenuous spirit, Dave Brubeck passed away on Dec. 5, a day shy of his 92nd birthday.

The jazz vocalist doesn't stray too far into unexpected territory at her Sound Room gig, and that's just fine.