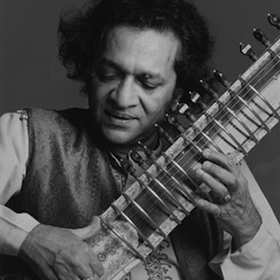 Ravi Shankar, loved and admired in the West and around the world as a vessel of Indian music and spirituality, passed away on Dec. 11 near his home in San Diego County. He was 92, and had recently undergone surgery for a long-term heart affliction. His wife Sukanya and their 31-year-old daughter and former star sitar pupil Anoushka were at his side.

Although he’s best recognized for introducing North Indian classical music to a clique of curious Westerners in the 1950s and to the Beatles and the wider youth culture in the following decade, Shankar had already visited France and the U.S. and recorded for RCA Victor Records in his teens, with his older brother Uday’s Indian dance troupe. Musical eclecticism came to him easily and early. “In Paris, I had heard Fritz Kreisler, Segovia, and Casals,” Shankar told me during an interview at his Encinitas abode. “Later on [in New York], I heard Satchmo in his very beginning, and Duke Ellington when he was young and dashing. I went to the Cotton Club, and I took all the records I could get. And I loved that old school jazz so much.”

The young Shankar also found himself deeply influenced by Baba Allauddin Khan, an older Indian musician who briefly joined Uday’s troupe and was known as a master of both North Indian tradition and imported Western band repertoire. It was Khan who focused Shankar, at age 15, on learning the 20-stringed, movable-fretted sitar, and engaged him three years later in rigorous oral transmission of the raga musical form, involving six dozen parent scales, 22 microtones within each scale, and a highly ornamented and physically demanding approach to the sitar. “I don’t think any other instrument gives you that much pain,” Shankar offered. He found company in his early studies in the person of his teacher’s son Ali Akbar Khan, a fretless sarod player two years Shankar’s junior, and in Ali Akbar’s sister Annapurna Devi, who played surbahar (bass sitar) and later became Shankar’s first wife.

Increasingly admired as a sitar virtuoso, Shankar drew skepticism from North Indian purists for integrating into his own compositions both the more folksy South Indian (Carnatic) tradition and Western band and classical instrumentation. Invited by violinist Yehudi Menuhin to visit the States in 1955, Shankar sent Ali Akbar Khan and joined him a year later, meeting a warm welcome from visionaries in both classical and jazz spheres, and from their audiences. Shankar went on to compose for Indian film and for Indian and Western theater, dance, instrumental soloists, and orchestra, including concertos and a symphony. “I’ve always been an enigma for people who want to see me in just one way,” he told me, chuckling. “When they find me and I’m somewhere else, they get bugged by that!”

His Western collaborators treasured Shankar’s marvelous mix of open-mindedness, virtuosity, spiritual reverence, and good nature. When jazz saxophonist John Coltrane came to Shankar in 1964, “He wanted to learn so much from me. He was reading Ramakrishna, he had just left eating meat and become a vegetarian, he had left drugs. We offered him wine, he wouldn’t take it, and I was so charmed. I asked him point-blankly in a hotel in New York, ‘John, you seem to be such a peaceful man, why do I hear so much in your music of crying out and disturbed?’ He told me, ‘What I want to get into, in your music, [is] that peacefulness, that tranquility, how you improvise within a set pattern.’ That’s the beauty of it: the discipline, but at the same time we are free as a bird. This is something which is not possible in any other music.”

A dozen years later, Beatles guitarist and songwriter George Harrison sought Shankar’s guidance on both sitar and spiritual pursuits. “I was thrown into this whole thing as a cult guru and superstar, which was very strange, because I’m not at all cut for that,” Shankar recalled, in still-idiosyncratic English. “But George became very near and dear to me, nothing to do with this whole hullabaloo. He was like a son or younger brother, student, and friend, all combined in one.” The two also collaborated in the studio and in the valuable fund-raising Concert for Bangladesh at Madison Square Garden.

While maintaining homes in India and England, Shankar took up residence in Encinitas in 1992 with his wife Sukanya, a former Carnatic singer and dancer, and their daughter Anouskha, born in 1981. There Anoushka continued her education in public schools, as well as her training in piano and Western classical music and on sitar with her father. “Uncle George” Harrison became a favored visitor to the sun-kissed modernist mansion, as did Sting, Philip Glass, and, eventually, the 18-year-old aspiring singer/songwriter Norah Jones, Shankar’s daughter from a relationship with New York musician Sue Jones, prior to his marriage with Sukanya. “They dance, they sing, they’re just free,” the proud father observed about the Norah an Anoushka, two years different in age, both of who went on to successful performing and recording careers of their own. Anoushka frequently partnered Ravi in concerts worldwide and in San Francisco, some of them benefits for his UCSF cardiologist, Kanu Chatterjee.

In a matter of bittersweet serendipity, Ravi Shankar and Dave Brubeck, departing at similar age within a week of each other, had both been nominated for 2013 Grammys, albeit in different categories. Saxophonist Ravi Coltrane, named for his late father’s friend and guide, is also a nominee. “We like to believe that music has to be learned, and one should know how to appreciate it,” Shankar said about his profession. “But if a musician is so full of knowledge and he doesn’t touch anyone’s heart, what would you call that, tell me?”