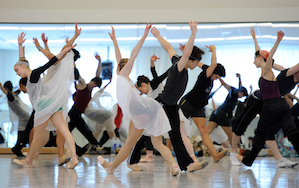 Since there are at least 150 ballets called The Rite of Spring and set to Igor Stravinsky’s revolutionary score, you wouldn’t think that we need an occasion like the one coming up to meditate on The Rite as dance. But with May 29 on its way, the century mark looms large, and there are new Rites to be observed.

Yuri Possokhov’s The Rite of Spring for the San Francisco Ballet, where he is choreographer in residence, premieres Tuesday night at the War Memorial Opera House. Mark Morris, this summer’s music director of the Ojai Festival and its Cal Performances counterpart, Ojai North, premieres his Rite with the Mark Morris Dance Group at Hertz Hall, June 13.

Why, you may be wondering, do we need more Rites? Many music critics write about The Rite without mentioning the dance that went with it. What caused all the rioting at its Paris premiere was Vaslav Nijinsky’s ballet, not the music. Witness the fact that a few weeks after the premiere and minus the Diaghilev Ballets Russes, the audience listened to the music calmly and applauded warmly. It was as if its premiere had vanished by collective consent and cultural amnesia. It was left to future generations to consider the Rite as dance — to recover, revise, and rebuke.

There were, of course, witnesses to remind future generations of what the uproar was all about. One of the best known was Nijinsky’s assistant on “The Rite of Spring,” Marie Rambert, the doyenne of British ballet. In her 1972 autobiography, “Quicksilver,” she wrote about Nijinsky’s “primitive, prehistoric” vocabulary for the work, with turned-in feet, knees a little bent, arms angled in the reverse of a classical position. The movement, she wrote, was simple walking, or heavily landed jumps.

Nijinsky’s ballet vanished from Diaghilev’s Ballets Russes after he married and the impresario, who had been his mentor and lover, fired him; he began spiraling into mental illness. His last public performance was in 1919, and his only surviving ballet is The Afternoon of a Faun.

In 1988, Millicent Hodson and Kenneth Archer tried to reconstruct Nijinsky’s Rite, based on his notes, Nicholas Roerich’s designs, and the memories of a surviving dancer. A stunning effort, presented by the Joffrey Ballet, it has been performed frequently in recent months.

In 1920, Leonide Massine re-choreographed the ballet. When it came to the U.S. in 1930, Martha Graham danced the leading role: Since Massine, she said, refused to work with her, she created her own movement. In 1984, Graham choreographed a Rite for her own company, with costumes by Halston.

Paul Taylor choreographed a Rite in 1980 to Stravinsky’s two-piano reduction. Stylized, irreverent and toxically beautiful, The Rite of Spring (The Rehearsal) happens in a gangland and in a studio, with a dancer-moll-mother and a baby who dies after being stuck with a great big knife.

Another superb Rite was choreographed in 1975 by Pina Bausch, who had just taken over the Wuppertal ballet. It was before she immersed her company in dance theater as Tanzteater Wuppertal, and to this onlooker it was stunning and unequivocal. Bausch herself danced the role of the Chosen One. Her dress was bright red; the stage floor was covered in brown soil. The dancers, not surprisingly, rolled in it and coated their sweaty bodies with it, and the audience inhaled the rich, loamy rhythms of the apocalypse.

It’s impossible to think of The Rite without considering the folk phrases and melodies that were part of Stravinsky’s composition. Although somewhere in the 150 dances there may be one that does not, the preponderance, at least, acknowledge folk influences, incorporating them to one extent or another into those heavy stomps, blunted jumps and involuted postures Rambert wrote about. Gravity, in both senses of the word, is implicit. The shock of its absence, the flight upward in music and movement, lies beneath the critical moment of sacrifice — when, that is, there is one. 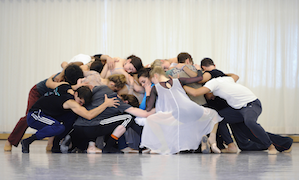 “Stravinsky was very specific when he said it had no plot,” Mark Morris maintained last week by phone from Manhattan. Morris said semi-seriously that he was “offering people in my company a reward of $100 if they come up with a scenario that I can use.”

Morris takes as his point of departure Stravinsky's memory that the 1913 scenario came from Roerich, who had suggested it to Stravinsky when the composer was writing The Firebird for the Ballets Russes. Stravinsky then used it for Rite of Spring.

Possokhov’s Rite set to the orchestral version, is in its final stages of creation, while Morris hasn’t yet choreographed his, which will be set to The Bad Plus’ jazz-trio treatment of the Stravinsky score — piano (played by Mark Morris Dance Group’s former music director, Ethan Iverson), percussion, and bass.

To discuss a ballet without seeing it is to court disaster. But brief conversations with Possokhov and Morris offered glimpses of differences and similarities in their approaches to The Rite.

To Yuri Possokhov, who was born in the Ukraine, The Rite of Spring is “a true piece of history,” he said by email, “a work of art that on so many levels is revolutionary.” And a choreographic challenge: “Hard tempo, hard counts and hard phrases, with lots of unexpected stops. It’s not getting easier as we go along, because the music is so incredibly important and integral to the choreography. And trying to follow so many different wavelengths within the score can make you feel a little crazy.”

He will follow the historic scenario, he said. “Some people may say that the theme of this work is primitive, but I feel that if you think about what’s going on in the world today, the symbolism of the Chosen One and the sacrificial person or people is still very relevant and current.” As is the music. “Through his enormous talent, Stravinsky took Russian folk melodies and elevated them to the next level. I think of him as transcending national music and making it truly international.”

Personally, Possokhov feels a huge bond with the creators behind “The Rite of Spring.’’ “As a Russian, you can’t escape it,” he said.

Possokhov noted that character dance was a special subject when he was in school. “For this work, I’m not using exact Russian folk dance steps, just trying to capture the feel of them. I think the dancers are adjusting well and working very hard.” Ballet dancers they are, but they’re willing to embrace gravity as well as escape it. “Actually, the dancers seem to love dancing more heavily — I don’t need to encourage them at all!”

Morris began his dance career as a member of a Balkan folk dance group. Many of his best works include elements of folk dance; it’s not unreasonable to assume his Rite will too. But talk of his favorite Rites, and after Taylor’s (“it may be the dance of his that I like the best”), he mentions Walt Disney’s Fantasia, “because it isn’t the proposed story, it’s dinosaurs. What’s better than that?”

As to why we need more Rites, Morris offered, “I don’t think we need it, but it’s a sort of irresistible, fabulous score, and the fact that it’s familiar and daunting to people is a reason. People are still scared of modern music. The fact that The Rite of Spring is a very, very great and strange piece of music, to this day, really helps.”