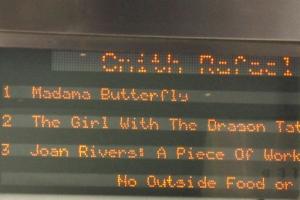 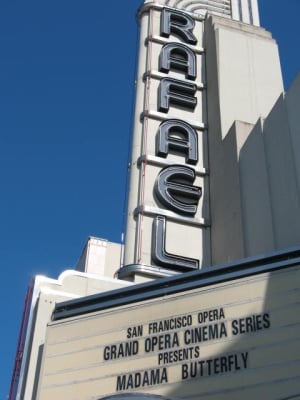 A heavy air of reverence fills the theater space as audience members quietly take their seats — the viewing ritual of a centuries-old art form. The lights dim and people are afforded the luxury of whispered anonymity: “It’s based on a true story, you know.” David Gockley, San Francisco Opera’s sixth general director, greets the audience with an introduction to Puccini’s Madama Butterfly. The orchestra tunes. Silence descends before the curtain rises.

But something is different. A latecomer disrupts patrons in one row. Seconds later, his partner scrambles to find him through the dark. Seats squeak. Mouselike crunching amplifies in both number and intensity as the performance begins. The warm, too-buttery tang of popcorn floats through the auditorium, while eyes are fixed on a movie screen. This is not a performance of the San Francisco Opera, but a new and different experience entirely: the San Francisco Opera Cinema Series.

Funded by a grant from the Koret Foundation and support from patrons, the San Francisco Opera launched an initiative to take opera outside the opera house in an accessible, approachable manner. It began months-long production on a media facility that would later generate live simulcasts, “opera vision” (live video of the stage during performance), and the cinema series. “The capturing of the film is the most difficult part, and the most expensive part,” explained Communications Associate Robin Freeman. “The whole media suite [was] extremely expensive.” The Opera’s historic home, the War Memorial Opera House, was fitted with fiber-optics and proper camera gear. Once in place, the Opera hired director Frank Zamacona to oversee media production. “I told S.F. Opera that, while I had directed music, I had never really directed an opera, ballet, or really anything classical,” explained Zamacona. “I was just coming off of directing and producing two Grateful Dead projects.” Zamacona set up quality control systems and worked hand in hand with the department heads at the Opera. “From the props, set, lighting, stage management, wigs, makeup, and costumes,” Zamacona explained, “we [were] all in this together. It was truly exciting.”

The Opera launched its cinema series in spring 2008 with live, high-definition screenings of La Rondine, Samson and Delilah, Don Giovanni, and Madama Butterfly. This inaugural series debuted in arts centers, independent film theaters, universities, and other venues throughout the country as part of an electronic media initiative. “These four titles, we thought, were very good representations of what this company produces,” said Jessica Koplos, the Opera’s director of electronic media. “There’s something accessible in the composer’s name or the title of the opera ... and [they are] beautiful productions with exciting singing.”

The cinema series, however, failed to catch fire. “It was a little bit of a struggle at first to build an audience,” said Freeman. “I think we jumped in with a lot of enthusiasm, and it didn’t work out quite as well as we had hoped. We hoped that the audiences would come.” The cinema series was rebranded, and soon scheduled screenings appeared in West Coast venues with which the Opera had established relationships, including San Rafael’s Smith-Rafael Film Center, Fremont’s Smith Center at Ohlone College, and El Campanil Theatre in Antioch. 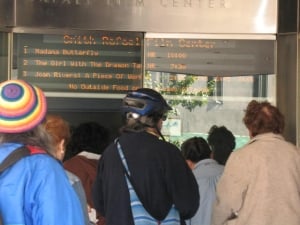 “There’s a different protocol in the cinemas,” explained Koplos. “We offer different point of view, camera choices. We have close-ups. We focus on what the singers are doing — not just for vocal talent, but expressions with each other.” In this endeavor, the Opera has pulled together a staff of 12 to 15 engineers, camera technicians, and editors per performance. “Technically, there is a lot to take into consideration,” Zamacona noted. “Lighting is different for stage than screen. What is too bright for HD is sometimes just right for the stage.” Color correction, sound mixing, and narrative camera angles are all taken into consideration during postproduction to the extent that the final product is specialized for a theatrical viewing experience. “When it is taken in the final edit we consider the artist, their performance, the music, and the production values,” explained Zamacona. “It is a collaborative process, and the first and foremost consideration is to end up with the best music and singing.” “It’s an interesting study tool for our musicians and choristers,” said Koplos. “We find that even with the artists, as they’re working onstage, they are interested in reviewing.”

While attending a cinema series production, the audience is given an opera experience wholly its own. Camera angles allow glimpses inside the orchestra pit; close-up framing allows more connection with the music; and sound is sharp enough to pick up the delightfully organic shuffles and creaks of stage movement. Opera trivia slides display during a 10-minute intermission. Interviews with the actors screen shortly thereafter and provide an insider’s glimpse at character motivation and performance technique — an experience unique to the cinema series, but one that, in the Madama Butterfly showing, also gave away major plot points to those unfamiliar with the libretto.

Viewing opera in this medium induced a visceral reaction. You watch what’s projected on the movie screen as you would a movie, in which the visual will often encroach on and subvert the sound (something you wouldn’t want in an opera house). At times, choices in scene editing stretched this rift further, making for strange flashback sequences and montage. On the whole, however, the cinema series maintains the feeling of attending a live operatic performance while allowing technology to enhance the experience. Postproduction has had a remarkable effect, using technology in a manner that preserves the essence of the performance. “I’ve seen [Madama Butterfly] so many times,” said audience member Jacquelyn Vallier, “but I feel like I’ve seen this for the first time.” 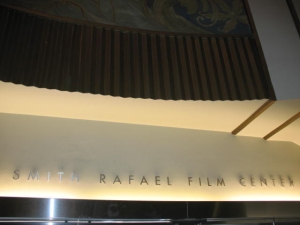 The theaters, too, have allowed for an enhanced viewing experience. “The SFO program allows us to include a high-quality, cost-effective option,” explained Tom Iovanne, executive director of the Washington Center for the Performing Arts, in Olympia, Washington. “Over the past few years we have installed a high-definition projector and during the summer of 2009 increased the size of our screen to a wide-screen format [35 feet wide], so we have the tools to provide a great platform for their program.” “We also mirror the SFO experience,” detailed Nancy Gribler, vice president of marketing at Sundance Kabuki Cinemas in San Francisco, “in that we have bars and bistros so that folks may experience a true ‘Night at the Opera’ if they wish.” “I’m an avid opera fan,” said Dan Zastrow, theater manager at the Smith-Rafael Film Center. “I go every year to the San Francisco War Memorial Opera House. ... [This program is for] people like myself. You’ve seen the actual production at the War Memorial and you want to see it again in a theater setting ... and wear your blue jeans.”

“I have been to many screenings in theaters and remained incognito,” said Zamacona. “I love to hear the comments of the audience between acts at the snack bar or afterwards as they exit the theater. They have been very positive, overall. ... I overheard some patrons coming back twice to screen some of the operas!” Come again they might, because the San Francisco Opera intends to continue the series with four new productions of performances featured last season. “They don’t have an exact date for that yet,” said Freeman, “but it’s very soon.” “What we’re hoping to find is that [this] spreads to the next generation of opera-goers,” explained Koplos. “We’re hoping these are little appetizers for the bigger appetite for the world of arts in general.”

As intermission came to a paced close, a mother and her young daughter marched down the theater aisle carrying a small bag of popcorn. “She wanted yours,” the mother explained to two audience members seated a row behind who were also munching on popcorn. They engaged in polite conversation, the young girl smiling, but hiding her head in the embarrassment of youth. At the end of Madama Butterfly, the youngster, aglow with energy, confidently marched up the aisle holding her mother’s hand. “That was good!” she exclaimed.