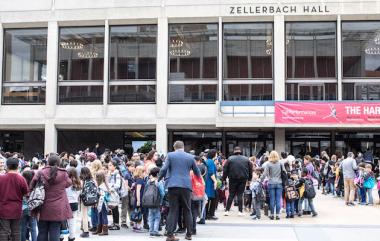 Students learned how Gumboot and Pantsula dances emerged from South African townships and urban cities as forms through which to defy oppression, inspire change and tell stories of life in Johannesberg. Gumboot dancing — performed in rubber Wellington boots — was developed by black miners to accompany work songs and serve as a form of communication when talking and drumming were prohibited. Pantsula, an energetic urban street dance with precise, technical footwork, originated in the black townships during Apartheid. Both dances are grounded in social movements and have evolved over decades, along with the country’s shifting political climate.

Students had the opportunity to interact with dancers before — and during — the show. Oakland photographer Stephen Texeira was on hand to catch the action.