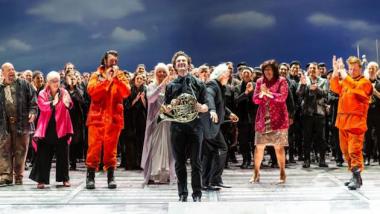 There were extra shouts of “bravo!” when conductor Donald Runnicles pulled/pushed a surprised Kevin Rivard, the orchestra’s co-principal hornist who played Siegfried’s horn calls and much else, to the front.

Performing the Ring’s 15 hours of majestic music within a week, with warm-ups, intermissions, and commute taking up much more time, is an ensemble effort. While the spotlight is obviously on the principal singers, it is right and just to celebrate the mostly invisible musicians in the pit. (See what it would be like if the brass were close and upfront.)

As S.F. Opera General Director Matthew Shilvock has observed, the prominence of brass instruments is obvious from the get-go:

After the double basses and bassoons lay the foundational sonorities at the opening of Rheingold, the first instruments we hear depicting the swells of the Rhine River are the horns.

One by one, they build up in sumptuous counterpoint. The eighth horn first, then the seventh, and sixth all the way up to the first horn, building in intensity and frequency --- a glorious layering of sound that so effectively carries us into the noble, surging Rhine.

Wagner tubas have a sound between a French horn and a trombone, and they form the basis for the Valhalla motif. They are notoriously difficult to play and to keep in tune. Mark Almond, who joined the Opera Orchestra from the Philharmonia in London, says they are lovingly called “catastrophones” in the U.K.

About preparing for the Ring’s challenge, Rivard told Classical Voice, “There are more than 200 pages of the first horn part for the Ring, filled with virtuosic and soloistic playing which utilizes the entire range of the horn.” The first-horn part has solos that cover a three-octave range.

When he prepares for most operas, Rivard says, he practices and maintains a high level of technique, “but everything changes with the Ring: my preparation starts about eight months prior, beginning with the two most challenging offstage solos --- the Siegfried calls in Siegfried and Götterdämmerung.”

The offstage horn call in Act 2 of Siegfried is considered the most challenging horn solo of any in the operatic or orchestral repertoire. “It requires a very high level of technique, strength, and stamina, ending the extended solo on the high F, the very top of the instrument’s range, as well as depth of musicality and expression,” Rivard says.

There is even a physical aspect of the challenge: “Because the stage is raked, my seat is at an angle, with my left side being lower than my right. The way the stage is set, there’s a spotlight on the opposite side of the stage, so if I try to watch Siegfried to coordinate my playing, I’d be blinded.

“So there’s a monitor set up for me above my music stand on the slanted stage, for me to watch Siegfried and coordinate my playing. Later on, toward the end of the solo, the orchestra joins in, and at this point I need to stop watching the monitor and start following the orchestra.

For orchestra veteran hornist William Klingelhoffer, the Ring experience goes back to the early 1970s, when he played it in Chicago, at the age of 19, both for the Lyric Opera and in Das Rheingold with the Chicago Symphony, conducted by Georg Solti.

His San Francisco history of many Ring performances includes playing Walküre here for Birgit Nilsson’s farewell performance. These cycles mark Klingelhoffer’s final performances with the Opera Orchestra before his retirement.

This is Almond’s first complete Ring cycle since joining San Francisco Opera as co-principal horn; he is playing the principal Wagner tuba during these three cycles:

Rehearsing and performing the Ring has really shown me how well Wagner understands the instruments. Naturally, being a horn player, I’m biased towards my own instrument but anyone listening to the horns at the beginning of scene two in the final act of Götterdämmerung depicting sunrise will appreciate the beautiful writing. It is very satisfying to play, smoothly passing through three octaves of the instrument’s range.

Also, listen to the menacing hand stopping in the lower horns which features prominently throughout the cycle — it’s really skillfully written for the horns and shows Wagner’s understanding of the limitations of the instrument.

The Ring is almost an epic “concerto for orchestra”: Sitting in front of the trumpets, trombones, and tuba throughout the 15 hours of the cycle you notice that pretty much every player in the brass section has exposed solos.

One of the most challenging aspects of playing the Ring as a brass player is that frequently one will have many bars’ rest (up to 20 minutes for some players) followed by an exposed, pianissimo solo, so keeping the instruments warm and the embouchure “limber” can be tricky.  The four Wagner tuba players also play the French horn so swapping between the two adds an extra (but fun) challenge.

For those who are brassed off, the annual Bay Brass Christmas celebration is here to answer your need for the smooth, polished, yet incisive sounds of the brass ensemble.