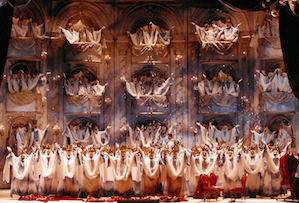 A happy aspect of the San Francisco Opera's observation of the Verdi-Wagner bicentennials is a work by another composer. It is Verdi librettist Arrigo Boito's 1868 mighty, ultra-romantic, Wagner-scale Mefistofele. 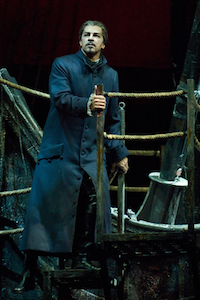 Luisotti is enthusiastic about the prospect:

To open the new season with Boito’s Mefistofele, an opera beloved and championed by Verdi himself, means a lot to me as we celebrate the bicentennial season of Verdi. I’m honored to lead the Company’s recognition of Italy’s finest opera composer with his final masterpiece Falstaff, set to a libretto by Boito, followed by his soul-stirring Requiem Mass, and later with the great romantic drama, La traviata.

Sonya Yoncheva and Ailyn Pérez (Cast B) will alternate in the title role of Traviata; Alfredo is Saimir Pirgu and Stephen Costello (B), Germont Vladimir Stoyanov and Quinn Kelsey (B). Feldman directs, Luisotti and Giuseppe Finzi (B) conducts. There is also a new commission for 2015 by Marco Tutino, La Ciociara.

In observation of Wagner's birthday (May 22, 1813 - Feb. 13, 1883), it's The Flying Dutchman, in a new coproduction with Opéra Royal de Wallonie of Belgium, Oct. 22-Nov. 15. Patrick Summers conducts, the production is by Petrika Ionesco. Greer Grimsley is the Dutchman, Petra Maria Schnitzer sings Senta, Kristinn Sigmundsson returns to the War Memorial as Daland. 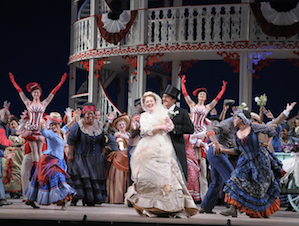 The promised world premiere is Dolores Claiborne (Sept.18-Oct. 4), by Tobias Picker and J. D. McClatchy, based on Stephen King’s novel. The cast is led by Dolora Zajick and Elizabeth Futral; George Manahan conducts, James Robinson is the director.

This is Gockley’s sixth commissioned work here since his appointment as company general director in 2006. His previous commissions are Appomattox (2007), The Bonesetter’s Daughter (2008), Heart of a Soldier (2011), and upcoming presentations of The Secret Garden (March 2013) and The Gospel of Mary Magdalene (June 2013). In addition, Gockley has commissioned 33 operas for Houston Grand Opera which he headed for 33 years. 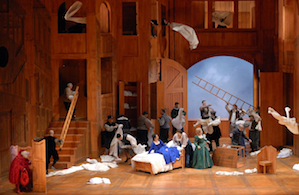 It will be directed by Francesca Zambello, conducted by John DeMain, and features a thoroughly operatic cast, with Heidi Stober, Racette, Angela Renée Simpson, Nathan Gunn, and Morris Robinson.

Rossini's The Barber of Seville, Nov. 13-Dec. 1, is double-cast, with Lucas Meacham and Audun Iversen in the title role, Isabel Leonard and Daniela Mack as Rosina, Javier Camarena and Alek Shrader as Almaviva. Giuseppe Finzi conducts, Emilio Sagi is the director.

Besides the Traviata run, summer 2014 will be also dominated by Madama Butterfly, eight performances between June 15 and July 9, Luisotti and Finzi taking turns on the podium. With a single cast this time, the cast is headed by Racette and Brian Jagde as Cio-Cio-San and Pinkerton.

Gockley said the "financial lockdown" continues in view of the ongoing recession, he intends to budget sparingly, but eliminate the $5 million annual deficit carried during the past three seasons. Budgets for the next two fiscal years will be in the $68-70 million range.