Who brought music into your life? Who fostered your musical talent, and changed your life? Do you know a teacher whose effort, dedication, and inventiveness deserve to be recognized?

This April, there will be a way to honor those great teachers. San Francisco Classical Voice announces its first annual Music Educator Award for teaching excellence. SFCV wants your favorite teacher to win this award! 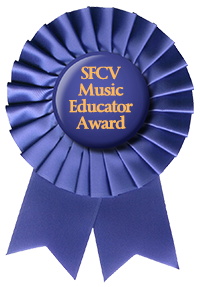 We are accepting nominations NOW. Deadline is April 1. Finalists will be selected, and winners announced the week of April 3. Please submit the teacher's name, school, and an essay of at least 250 words on how the teacher inspired you, with examples of their excellence in and out of class. Mail your nomination to [email protected] with the subject heading: Music Teacher Award nomination.

“You don’t really learn music from books; you learn it from other musicians,” said SFCV editor Michael Zwiebach. “Teachers pass on traditions, and everyone who plays an instrument, or is passionate about music, can remember someone, somwhere along the line, who opened that door.”

“SFCV has been seeking a way to honor and celebrate great music teachers in the Bay Area for a long time,” said Executive Director Veronica Bashbush. “We realized after the announcement of the special Grammy Award for music teachers, that this was the perfect opportunity to start our own award and help facilitate local nominations for the Grammy at the same time.”

SFCV will sponsor the winner’s nomination to the Grammy Foundation’s Music Educator Award (which offers cash prizes of $1,000 to $10,000). In addition, the winner will receive complimentary SFCV Education membership for his/her school’s music program. The winner and two runners-up will be featured in an SFCV article recognizing their remarkable impact on students’ lives.

The award is open to current U.S.-based music teachers from K through college, in public and private schools. Teachers in after-school, private studios, or other educational settings are not eligible. Anyone can nominate a teacher — students, parents, friends, colleagues, community members, school deans, and administrators — and teachers are also able to nominate themselves. Remember the deadline: April 1.

At the 55th Annual GRAMMY Awards President/CEO Neil Portnow, Honorary Board Chair Ryan Seacrest, and multi-GRAMMY-winning artist Justin Timberlake announced the Foundation’s first-ever Music Educator Award to recognize teachers for their contributions to our musical landscape and their positive influence on their students’ musical experiences. The winner, who will be selected from 10 finalists, will receive $10,000 and the nine finalists $1,000 each.