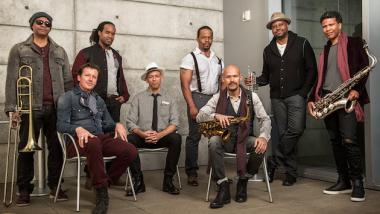 In a recent conversation with pianist Simon Rowe, the director of the San Francisco Conservatory’s new Roots Jazz and American Music program noted that the Bay Area jazz scene has a rich jazz-education infrastructure and a world-class presenter in SFJAZZ. In other words, while the region offers copious opportunities for aspiring musicians and high-profile gigs for established stars, there’s a gaping void for the huge swath of artists in the middle.

“We’ve got the icing, but we haven’t got the cake,” Rowe said.

Given the economic realities, there’s no reason to expect a sudden spate of new clubs and performance spaces, though it’s remarkable how little it takes to keep a scene thrumming. For several decades Bonnie Hughes maintained a vital East Bay niche for creative music in various unused storefronts under the Berkeley Arts Festival rubric, though she hasn’t been able to find a new space since the last one closed in Nov. 2016.

What the scene needs as much as new venues are commissioning initiatives that provide support for new composition. In an only-in-San-Francisco twist, the organization that’s taken the lead in funding new works by jazz and jazz-influenced composers is San Francisco Friends of Chamber Music, which funded new works by drummer Alan Hall’s Ratatet, percussionist Anthony Brown, the Montclair Women’s Big Band, and the Nathan Clevenger Group in its last round of grants.

The question is, when is SFJAZZ going to step up to the plate? Rather than supporting the development of original music, the organization has long presented local artists in “Hotplate” concerts, which pair a bandleader with a classic album, like pianist Adam Shulman playing Vince Guaraldi’s A Charlie Brown Christmas (Dec. 14–17) and tenor saxophonist Smith Dobson playing Stan Getz’s Captain Marvel (Jan. 18).

There’s nothing inherently wrong or insulting about this concert (I’m hoping to catch Dobson’s show). But without a program to develop and promote new music by Bay Area artists, the “Hotplate” concept sells the local scene short, particularly when so many of the artists featured in the series are composers themselves. Why not create a monthly or quarterly Joe Henderson Lab concert series premiering new works by Bay Area artists with a year-end event in the Miner Auditorium reprising the commissions? It would carve out an essential local role for SFJAZZ that could reverberate far beyond the Bay area.

It’s not like the organization is clueless about the importance of generating new music. The SFJAZZ Collective provides a strong model, with its commitment to generating new arrangements of canonical works by jazz legends alongside new compositions commissioned from ensemble members.

In so many other ways SFJAZZ is hitting its stride, particularly when it comes to education. The High School All-Stars continue to launch tremendous young players. A recent $3 million grant from the Stupski Foundation is funding the SFJAZZ Education Department’s expansion in San Francisco and Oakland public schools, reaching more than 23,000 students, while the RJAM alliance with the San Francisco Conservatory looks as promising as one could hope. Once those conservatory students graduate, they should be able to aspire to more than a gig from SFJAZZ.