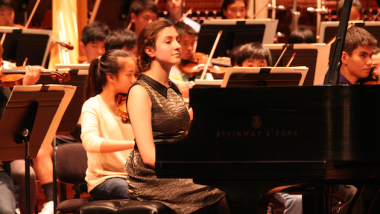 The way San Francisco Symphony Youth Orchestra member Agata Sorotokin tells it, her musical focus underwent an internal shift during her junior year of high school. That's when the keyboardist became more interested in conducting. She approached Donato Cabrera, the orchestra's music director, and the symphony's resident conductor, about how to get started.

Fast forward to this summer and the newly minted high school graduate will assist Cabrera with his conducting duties during the youth orchestra's upcoming European tour before she starts Yale in the fall as a freshman.

"I'm not 100 percent sure yet what I'll be doing on the tour," said Sorotokin, 17, in a telephone interview. "I suppose I may not perform very much, but I will get a lot of experience about how orchestras work in incredible halls, like the Berlin Philharmonie," she added with a hint of awe in her voice.

The tour's repertoire will consist of two works by Bay Area composers, John Adams’s Short Ride in a Fast Machine and Mason Bates’s Garages of the Valley; and Hector Berlioz’s Symphonie Fantastique and Gustav Mahler’s Symphony No. 5.

Sorotokin took the initiative to approach Cabrera after many years of watching him lead the youth orchestra, which numbers around 108 musicians, ranging from age 12 to 21, according to its website.

"They sparked my strong interest in conducting," said Sorotokin, a piano student of John McCarthy in the preparatory division of the San Francisco Conservatory of Music, where she also studies composition.

In an emailed statement, Cabrera noted Sorotokin's initiative and talent. “From time to time, a young person who is connected with the San Francisco Symphony Youth Orchestra shows incredible aptitude for and interest in conducting," he said. "Although we don’t have a formalized conductor training program, I am happy to provide mentorship and opportunities to people like Agata, who show such talent and drive to master the craft."

Included on Sorotokin's list of admired conductors is Marin Alsop, music director of the Baltimore Symphony Orchestra. Sorotokin hopes there will be more opportunities for women conductors. "The world in general is moving in the right direction in terms of women leaders. I hope that would be the case for women music directors."

"The fact that she happens to be female does not really come into play," said Cabrera, "but it makes it doubly satisfying knowing that we are able to nurture women in their pursuit of what has traditionally been a male-dominated field.”

Sorotokin's piano studies have taken her near and far, from the [email protected] Chamber Music Institute and the Aspen Music Festival and School to the Moscow Tchaikovsky Conservatory to work with Russian pianist and composer Ivan Sokolov.

Will her interest in piano wane as she pursues further studies in conducting and musicianship?

"It's kind of impossible to think of giving up the piano," said Sorotokin, who made her debut in Carnegie Hall’s Weill Recital Hall at age 10. "My ideal would be that model of being a conductor and a pianist and, maybe, a composer."