Extreme brinkmanship failed, and long after several apparent "final" deadlines, efforts to end the strike by musicians of the San Francisco Symphony failed, and the long-planned East Coast tour is now canceled. 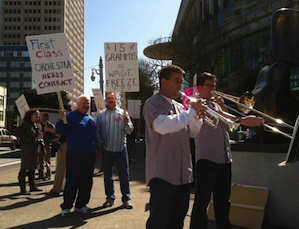 At the end of the third consecutive contract negotiating session, each going far into the night, San Francisco Symphony management and musicians remained deadlocked Sunday morning, and the Davies Symphony Hall matinee was canceled, but the tour remained on the agenda. Later in the day, talks resumed, apparently with new offers from either — or both — sides.

Finally, Sunday afternoon, at 5 p.m. SFS announced the cancellation of the orchestra's East Coast tour. Apparently, the entire dispute has taken a turn for the worse

Michael Tilson Thomas and the orchestra were scheduled to perform four concerts beginning with performances in Carnegie Hall’s Stern Auditorium (March 20-21); then in Newark at the New Jersey Performing Arts Center, March 22; and in Washington, DC, at the Kennedy Center, March 23. The tour repertoire was to include Mahler, Brahms and Beethoven, and a new work by Samuel Carl Adams. Yuja Wang was to be the soloist in Beethoven's Piano Concerto No. 4.

The next scheduled Davies Hall concerts are on March 29 (with Bernadette Peters) and March 30 (Bobby McFerrin), neither requiring the orchestra, but doubtful to be performed if the the strike isn't settled. The first subscription concerts next month are scheduled April 5 and 6.

Further negotiations are expected, but both sides appear pessimistic about a resolution in the near future. One source said, even before the last round of talks, "we have gone as far as we can in reaching a compromise." Apparently, that was not enough.

The view from the musicians:

For the past four days the SFS Musicians’ Negotiating Committee has been negotiating with the Administration in an earnest effort to reach a deal that would allow the orchestra to leave on its scheduled East Coast tour with concerts at Carnegie Hall and the Kennedy Center. Talks broke down at 4 am this morning. When it was apparent there would be no agreement by the deadline, the Federal Mediator who has been working with the parties for the last several weeks suggested a 60-day cooling off period. The proposed cooling off period required a media blackout but would have allowed the tour to proceed if approved by the orchestra.

Today the Negotiating Committee met with the orchestra and presented the Federal Mediator’s suggested proposal. After a thorough review of the options, the orchestra voted down the cooling off period. The strike is continuing and we anticipate that the Carnegie tour is now cancelled.