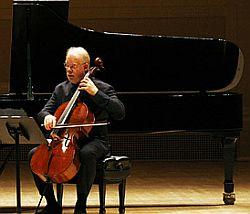 Time Out for Bach

Jason Victor Serinus on May 20, 2008
Lynn Harrell is one vital man. In the middle of an extended phone conversation about his forthcoming S.F. Jazz gig — he plays J.S. Bach’s complete Suites for Solo Cello this Thursday and Friday night in Grace Cathedral — the voice of a child punctuates the proceedings. Hannah, I learn, is going to be four. “Honey, you have to go over and play with Mommy, because I can’t talk to Jason,” says the patient, ever-buoyant 64-year-old cellist. “But I’m being quiet,” Hannah softly protests. “No, you’re not being quiet,” Daddy lovingly replies, in tones that reflect the sweetness of his cello’s timbre. “Having a daughter at age 60 is the greatest thing,” says Harrell. “I don’t know if it’s Grandfather Time clicking in, but I just love it. My other children — they’re twins, a boy and a girl — turned 28 yesterday and the day before. They were born across midnight, so that’s why they have two different birthdays. I never felt quite so close to them as I do this little girl and my son who is just 15 months. I had my knees replaced last December because I want to be able to run around with them. It is the greatest.” You can hear the vitality in Harrell’s CDs of Bach’s six suites. Recorded in 1984, and released the following year to commemorate the 300th anniversary of Bach’s birth, his interpretations take Bach’s dance designations both seriously and lightly. Seriously, because even at his most profound, Harrell grants each section a sense of liquid movement sometimes absent from other renditions. And lightly, because when he plays the gigues that end each suite, he often skips and scampers like a young colt let out to pasture. It's illustrative to compare Harrell’s renditions with two recent and well-received recordings of the suites — Jean-Guihen Queyras' recording concludes Suite No. 4 in E-flat Major with a stately gigue (running two minutes and 23 seconds), and Steven Isserlis’ drier-toned musicianship knows not of fun (2’32). In marked contrast, Harrell’s warm, liquid-sounding cello kicks up its heels (2’09), and launches into an almost breathless, agile dance best left to the youngsters. As for the final finish, the concluding gigue to the Suite No. 6 in D major, neither Qyeyras (4’01), Isserlis (4’03), nor earlier recordings by Rostropovich (4’09) and Casals (3’59) come within miles of Harrell’s unabashedly exuberant, joyful romp (2’26).

“Bach is one of the most profound composers of all time,” Harrell explains. “The music can excite you. It can make you jump with joy, or start crying with tears through sadness. You slap your leg when an important new voice comes in a fugue because it’s so exciting. “All the feelings that one can get from music, one gets in spades from J.S. Bach, perhaps with the excitement quotient being the greatest. When my doctor, who is an amateur music lover, first suggested this to me, I thought, well no, Stravinsky, Shostakovich, and Beethoven are exciting. But when I started listening to Bach to see if he is the most exciting, I came away thinking, absolutely he is.” Surprisingly, Harrell declares this a new revelation, one that came to him in the last few years: How has his approach to Bach changed since he recorded the suites at the tender age of 40? “While the basic tempos are about the same,” he explains, “I have much more patience with the unfolding of music. I realize we live such a computerized, quick life compared to the 18th century that you just have to take more time to let the music breathe and express itself. “I love when great actors are aware of this. I just saw The Bucket List, and some of the conversations between Jack Nicholson and Morgan Freeman take a lot of time. That allows the mental and the communicative dialogue to express itself.” To demonstrate how his Bach performance has evolved, Harrell half-sings examples over his cordless phone. His “Dadadida dadadida ... Bum bah bah,” doesn’t translate very well into print. It could just as easily represent an Indian raga on tabla, but his “now” version is microseconds slower. “The way I play now gives the music more time to make its storytelling points,” he says. “It allows it to breathe and live, rather than be kind of strict. “I think of the specter of Bach, and his overall conception of structure. In musical terms, he was like a Newton. He was thought of in that way during his day because of his music’s complexity, and his rigorous sense of architecture and structure. But it doesn’t mean that his music shouldn’t be human and warm and effusive and fun and dynamic. Though he was sort of like an Einstein or a Newton of compositional technique, he has more heart than just about anyone you can think of, except Mozart and Schubert. He has a frightening, awesome kind of musical personality that you confront when you play his music. “There are great architectural cathedrals, like the one in Cologne, that are so extraordinary. It probably has things about it that are slightly inexact in measurements and proportions, but the overall structure is so powerful that it speaks to us emotionally. All these wonderful intellectual, structural, and architectural aspects of J.S. Bach are there in the music. The overall effect is so much more than just wonderful puzzle music. It has great emotional impact.”

Easing His Way In

Even though Harrell began studying the first suite when he was 11 — much to the delight of his violinist mother — he indulged in only a few, scattered public performances of the first and third suites until well into his 30s. That may sound surprising for a Juilliard and Curtis Institute-trained cellist who made his professional debut with the New York Philharmonic at Carnegie Hall in 1961, began a solo career in 1971, and has since recorded core repertoire by Beethoven, Schubert, Tchaikovsky, Brahms, and others with the likes of Itzhak Perlman, Vladimir Ashkenazy, Stephen Kovacevich, Pinchas Zukerman, Nadja Salerno-Sonnenberg, and Kennedy. “I can’t brag, as Pablo Casals did, that he practiced them daily for 10 years before performing them in public,” he confesses with wry humor. The reason Harrell held back has to do with his father, baritone Mack Harrell. Although Mack Harrell sang 23 roles at the Met, and created the role of Nick Shadow in the American premiere of Stravinsky’s The Rake’s Progress, he is most remembered for his recordings of Bach’s oratorios. He sang the role of Jesus in the St. Matthew Passion many times, and recorded the part of Jesus in the St. John Passion. His last record featured two Bach Cantatas (Ich habe genug, No. 82, and the “Kreuzstab” Cantata, No. 56) with the Cleveland Orchestra. “I was 15 when my brother, sister, and mother got the test pressing,” he says. “It was about four months after my dad died in 1960 at age 50. It was very emotional listening to those two glorious performances. I recognized that when I played Bach, I felt the stigma of my dad’s last recording. Those two Bach cantatas have more raw emotional feeling than the cello suites, which are very instrumental and lack text. 'I will with gladness carry the cross,’ ‘It is fulfilled,’ and ‘I’m ready to go to heaven’ — are texts that convey a sense of letting go and dying. But the cello suites, with the exception of perhaps one movement — the Sarabande of the fifth suite — don’t have that same kind of emotional impact. “My dad’s last recording, and what people had said about his performance of the role of Jesus, hung me up. I felt that I couldn’t play the suites in a way that came alive. It was a little bit cold, a little bit dry; it wasn’t comfortable. I didn’t get the same feeling of artistic satisfaction from performing them. I also felt as though I couldn’t really manage to play them all that well, even technically. Although I played much more difficult music well, it was music that I was somehow more comfortable with. “Somehow, over the years, the resistance diminished and fell away. I now feel good about playing Bach, and play with a great deal more passion, virtuosity, and tonal splendor. And I feel sort of entitled. I’m not so nervous as I used to be that I’m breaking Baroque and authentic early-instrument rules. It’s a transition that has taken about 20 years, at least since my mid ‘30s.”

Our conversation shifted to changes in interpretation. Harrell decries the “over-romanticized, slow, turgid, heart-on-sleeve” performances of the 1920s and ‘30s, and contrasts them with the “clinical approaches” of the early authentic instrument movement that do not take into account changes in listeners and listening habits. He contends that it is not possible to re-create music as it was performed in 1725, because the change in listeners has resulted in a change in how music is perceived. “We now have listeners who have experienced Stravinsky, Shostakovich, Schoenberg, electronic music, the loudness of a 747 taking off, and the quickness of a TV beer advertisement, which flashes 30 images in nine or 10 seconds. The 21st-century listener hears music, and assimilates it mentally and emotionally, extremely differently than an 18th-century gentleman. Certainly, when music was played in much smaller venues, the loudest thing that the urban man would ever hear was thunderclaps. Perhaps people's hearing was less damaged than it is now. “Today, time goes so much faster. If your watch gained four minutes in a week, that didn’t matter much in the 18th century. If your letter got there three weeks later, it wasn’t a big deal. It is now. “I like to promote the idea that we take the emotional, dramatic, theatrical, or intellectual effect that the composer had in mind as the basis of our performance, and present J.S. Bach to modern listeners so it has the same kind of impact that it would have had in 1725. The feeling and depth of emotion in his music is very profound. It’s not only for the poignant and the sad and the lonely, but also for the energetic, athletic, and vibrant. Bach was one of the first really great virtuosos on a keyboard instrument. I think he loved hot fingers, and that should be portrayed in the string instrument as well.” Lynn Harrell performs Bach’s Cello Suites 1, 5, and 3 in Grace Cathedral on Thursday May 22, 7:30 p.m., and the remaining suites on Friday at 8 p.m. For tickets, see www.sfjazz.org or call 866-920-JAZZ (5299).