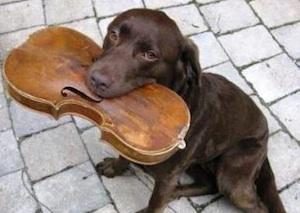 Check out our collection of fun classical music videos

Most of us know the themes of the jokes below: the ego of conductors; penniless musicians; the awful sounds — to the uninitiated — of the accordion, bagpipes, and (inexplicably) the viola; the hilarity of unmusical percussionists, tenors, and sopranos … and so on. These are the oldies but goodies, the classics of classical music humor. It’s all here. So, fill up and then venture on to the party circuit unafraid. And add your own on our Facebook page or in our comments area below.

1. What do you do when a musician calls at your house? A: Give him the 20 bucks and take the pizza.

2. Why is an organ concert like a religious experience? A: In its playing we sense the majesty of God, and in its ending we know His divine mercy.

3. “Bad news,” the sheriff reports to the violist. “While you were gone, the conductor came to your house, burned it down, and killed your family.” Violist: “The maestro came to my house?!”

4. Herbert von Karajan and his wife enter a room. Wife: “God, it’s cold in here!” Karajan: “Darling, you can call me ‘Herbert’ when we’re alone.”

5. What is the difference between an orchestra and a bull? A: On a bull, the horns are in front and the asshole’s in the back. 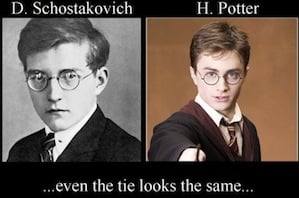 6. On waking the morning after a gig, an accordionist realizes he’s left his priceless instrument in the back seat of his car. Sure enough, on rushing out to the street, he finds his worst fears confirmed: The window is broken and two accordions are in the car.

7. A musician calls the orchestra office and asks for the conductor. The receptionist says, “I’m sorry, sir, the conductor died last night.” So he calls back and asks again. She repeats the message and says, “I just told you that. Why are you calling again?” “I simply like to hear you say it.”

9. How do you get two percussionists to play in time together? A: Shoot one of them.

10. A drummer, tired from being ridiculed by other musicians, decides to change instruments. At the music store, he goes up to the sales counter and says, “I’ll take that red trumpet over there, and that accordion.” After a second, the store clerk says ,“OK, you can have the fire extinguisher but the radiator stays.”