War Memorial: Historic Past, Improvement in the Present, Promising Future 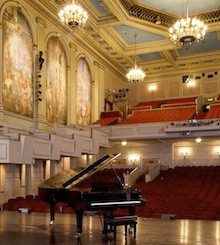 Directly across from San Francisco’s City Hall — where President Harding (rumored to have been done in by his wife) lay in state in 1923; where Joe DiMaggio and Marilyn Monroe got married in 1954; and which is now the world’s largest base-isolated building, riding on 530 rubber isolators — stands the War Memorial Veterans Building, with a less colorful history but still of great importance to the city’s arts.

How important? Its pending closure for renovation will displace hundreds of events in a city not particularly rich in concert and recital venues.

Once home to SFMOMA, and in the history books for serving as the place where the United Nations Charter was signed, the War Memorial’s Herbst Theatre and the Green Room have long been major performance venues for such organizations as San Francisco Performances, Philharmonia Baroque, New Century Chamber Orchestra, Left Coast Chamber Ensemble, City Arts & Lectures, and others.

Architect Arthur Brown Jr. was responsible for the gorgeous Beaux-Arts City Hall, reopened in 1915, and the stout twins of the War Memorial and the Opera House, both opening in 1932. (Brown also designed Coit Tower, Temple Emanuel, and other city landmarks.)

The historic auditorium was renovated in 1977 as a gift to the city from the Herbst Foundation and renamed Herbst Theatre. Four murals painted by Frank Brangwyn, a Belgium-born artist and president of the Royal Society of British Artists, originally commissioned for the Court of Abundance at the Panama-Pacific International Exposition of 1915 in San Francisco, hang on the walls, on either side of the theater.

What makes all this timely? As the final piece in the Civic Center’s $1 billion seismic upgrade, the War Memorial will follow City Hall, the Opera House, Civic Auditorium, and other buildings in undergoing reconstruction. Between 2013 and 2015, the War Memorial will be closed for business ... and for performances.

What Lies Ahead for Herbst 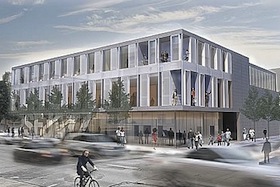 The plans for the building hold much promise. The San Francisco Opera will pay $15 to $20 million for a full floor of rehearsal and office rooms, which will include a 300-seat performance space. The San Francisco Arts Commission will move its offices and art gallery into the building. A new cafe-restaurant will open on the first floor. Still, the lengthy closure will deprive organizations of vital performance venues in the heart of the city. Herbst alone hosts more than 250 performances annually, the Green Room about half as many.

We will continue presenting, and possibly increase our presence, at the San Francisco Conservatory of Music Concert Hall [450 seats], Novellus Theater at YBCA [757 seats], St. John’s Presbyterian Church in Berkeley, Marines’ Memorial Theatre and Salons at the Hotel Adagio (starting in January). We also may do a few concerts at Davies [Symphony Hall] and are hoping that SF Jazz’s new facilities will be completed and available by this time. 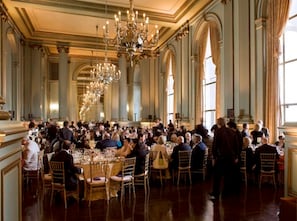 The SFJazz Center, now under construction, is a $50 million, 35,000-square-foot structure, at Fell and Franklin Streets, designed by Mark Cavagnero, set to open about a year from now, with a main hall that could seat 700. (Herbst’s capacity is 916.)

We are excited to collaborate with the San Francisco Conservatory as the two organizations have many touch points in common. Stuart Canin [NCCO’s first music director] was a teacher there and Krista Bennion Feeney [Canin’s successor] a graduate, in addition to many of our musicians. [Music Director] Nadja Salerno-Sonnenberg begins our future partnership with a December 10 master-class and we will continue to explore creative ways to combine the exuberance of New Century with the energy of the Conservatory. 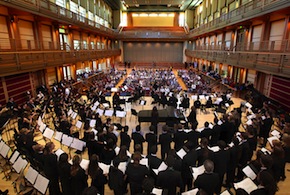 Peter Pastreich, executive director of Philharmonia Baroque, says he has located “a number of beautiful churches that would make really fine venues in San Francisco. We are convinced that we will find a suitable substitute. We’ll look forward to returning to Herbst once the renovations are complete, especially now that the War Memorial has enhanced the concert experience there by working to improve the hall’s acoustics.”

Pastreich, in fact, is responsible for initiating a major improvement now in progress for Herbst’s acoustics.

The former general manager of the San Francisco Symphony, he has given voice to dissatisfaction with Herbst’s acoustics expressed by numerous musicians and audiences: “They found the hall lacking in reverberance and warmth, and inconsistent in sound from one section to another.”

Can You Hear Them Now? 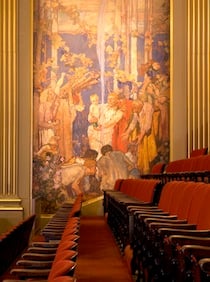 When it became clear that the planned seismic renovation of the War Memorial Veterans Building, scheduled for 2013, would include no substantial changes to Herbst, Pastreich organized the Acoustical Advisory Committee to find ways, working with the War Memorial Board of Trustees and its staff, to make improvements.

A famed acoustician, Lawrence Kirkegaard (of Tanglewood, Royal Festival Hall, and locally, the Davies Hall renovation and the Conservatory Concert Hall), became involved with both the Herbst improvement and the planning for the S.F. Opera’s space on the building’s fourth floor.

Kirkegaard’s first report on Herbst was critical of “the restrained and lackluster qualities we experienced during performance.” He differentiated “at least three different acoustic zones in the room: the balcony is reasonably live and full, the main floor is dull and lifeless, and the stage is unresponsive and misleading.”

He identified several causes for the hall’s acoustical problems, including:

The tiles on the lower walls that look like stone masonry are actually made of a sound-absorbing substance called Akoustolith. Carpeting in the hall is laid over an underpad that absorbs mid- and high-frequency sound. The tilted panels along the lower side walls reflect sound in inappropriate and unnecessary ways. The heavy curtains in the stage area absorb sound.

The side boxes (55 seats, added during the 1977 renovation), with their light wood panels, absorb low frequency sound and interrupt full access of sound to the whole space. The vintage Wenger shell is too small in width, height, and volume to be effective. The large number of air-return openings in the ceiling contributes to the room’s deadness.

Improvements began with the removal of six of the decorative panels, installation of new carpeting without underpad, and the spraying of the Akoustolith tiles on the walls with six coats of sealant. House Manager Erik Nilsen is overseeing the work.

My favorite part of the latest report, in October:

Mr. Kirkegaard subsequently inspected the walls with a microscope and recommended that one or two additional coats of sealant be applied, this time with a brush and squeegee.

The project is in good hands.