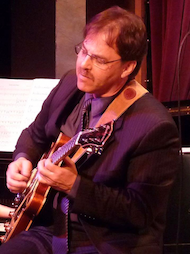 With great pleasure, San Francisco Classical Voice announces the winner of its second Music Educator Award: Randy Porter, music director of Westlake Middle School in Oakland. Mr. Porter was one of many highly praised educators who were nominated this year. The SFCV editorial staff was particularly impressed by his astounding ability to teach and administer an entire music program alone. As one parent put it, “Randy doesn’t run the Music Department. He is the Music Department.”

Mr. Porter took over in 2000, in a school that had been without a music program. This year, 150 students, about one quarter of the students in the school, are taking music classes at Westlake. By himself, Mr. Porter directs the concert band and orchestra (two levels each), a guitar class, and a jazz ensemble, and produces more around 25 performances a year. This weekend, his students compete in the California Music Educators Association band competition, and next week, his jazz band performs a self-produced concert at Yoshi’s.

Mr. Porter has, of course, faced the problems of many public school teachers in inner-city environments, but he has not compromised standards or opted for a “dumbed-down” approach. He inspires students and gives them the tools they need to tackle a wide range of difficult music. He brings a variety of guest musicians into his classrooms, such as (recently) trumpeter Sean Jones or the Cypress String Quartet. And he consistently brings his students to competitions around the area, where they perform well. As the parent of one student put it, “He makes self-esteem, focus, and drive possible at a time and place when those qualities are precious hard to come by.”

As part of his award, Randy Porter has been nominated by SFCV for the Grammy Foundation’s Music Educator Award, which was the inspiration behind the creation of the SFCV award. Look for an article about him in the forthcoming SFCV Kids & Family newsletter on Thursday.