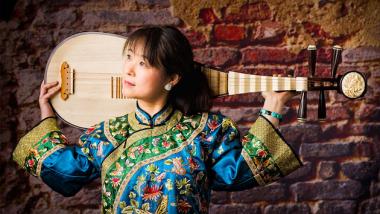 One item on the roster for the upcoming season of Cal Performances in Berkeley immediately piqued my interest: Wu Man and the Huayin Shadow Puppet Band. Having traveled extensively in Southeast Asia and parts of Indonesia I am no stranger to shadow puppets. But a shadow puppet band? This was new to me. Interestingly, it also turned out to be something “new” to Grammy-nominated Wu Man, an internationally recognized master of the ancient pipa. She is currently on a 12-city, cross-country tour of the U.S. with them, including a stop in Berkeley on March 11.

Born in Hangzhou, China, Wu Man was a child prodigy. She began studying the pipa (a lute-like stringed instrument that dates back more than 2,000 years) at age 9, and was accepted at the prestigious Central Conservatory of Music in Beijing at 13. Fortunate to be growing up when China was just beginning to open its doors to the outside world, in 1979 she attended a performance by the Boston Symphony.

“The first time I heard American music live was the Boston Symphony,” says Wu Man. “They played in the stadium with Seiji Ozawa, and it blew me away.” Hearing Western music played live for the first time, with an Asian conductor, was quite startling and “totally opened the door.” And when Isaac Stern visited her school and gave a master class, talking about what it means to be a musician and what music communicates to an audience, things she had never heard before, it was a major turning point in her life.

In 1990, she decided to move to United States, and became part of a new wave of young Chinese students who had the desire — and now the freedom — to study abroad and explore life and culture outside of China. And it didn’t take long for Wu Man to break out of the traditional music box.

“I think it’s in my genes,” says Wu Man. “I always had curiosity about other things. I did not see myself as just a Chinese musician playing a Chinese traditional instrument,” she adds. “I always wanted to step out to see what’s going on and how I can use this Chinese instrument and be involved in the whole community, the whole culture, the whole world stage.” And that has been her major focus ever since. When Carnegie Hall asked her to curate a festival celebrating Chinese culture in 2009, Wu man decided to return to China and see what she could find.

“I went back to China to try to find some kind of traditional music,” says Wu Man. “I wanted to rediscover [it] and I heard about this band and it immediately grabbed me. I always loved shadow puppetry, and the music is fascinating and so different than what I grew up with — very loud and wild — gypsy, earthy. I said, ‘OK, I want to work with them — I want to join them,’” she says with a laugh.

The Huayin Shadow Puppet Band, versions of which have been touring the countryside and performing for more than 300 years, lives in a small village in northwest China, and had never been out of the country. The band sings and plays in a raucous, highly syncopated style, combining the erhu and banhu, traditional Chinese stringed instruments with lute and fiddle, and banging wildly on various percussion instruments — clappers, gongs, cymbals, and even a wooden bench. Wu Man brought them to Carnegie Hall, along with several other groups — none of which had been seen in the West — and the audience loved it. So much so, that Wu Man decided to return to China and make a documentary about her experience (Discovering a Musical Heartland), which inspired her to bring the shadow puppet band back west again.

“After Carnegie Hall, it was in my mind for a long time that I wanted to bring them [the Huayin Shadow Puppet Band] back,” says Wu Man, “but it took a few years to plan it.” In addition to the concerts, they will also be going into schools — from elementary level to college — to expose students to this unusual band, and to her own music on the pipa.

Although the pipa is commonly known as a Chinese instrument, Wu Man explains that it actually originated in Persia. “Nothing is pure,” says Wu Man. “Nothing stayed in one place. Everything travelled and came from someplace else.” This makes sense when you consider the history of the Silk Road, which was established during the reign of the Han Dynasty, and began trading with the West around 130 B.C. That brings us back to the shadow puppets, which originated in China around that same time, and also traveled the Silk Road, finding their way to other parts of Asia, India, and Indonesia.

Wu Man has called the U.S. home now for almost 30 years, and is constantly busy, performing as a soloist with many of the world’s major orchestras, playing with the Kronos Quartet, touring with Yo-Yo Ma and the Silk Road Ensemble, and collaborating with modern composers and musicians from different cultures in musical styles ranging from jazz to folk to classical. But promoting traditional Chinese music is still something she is passionate about.

“Every time I play concerts [in the U.S.], people come up to me and ask, ‘What is Chinese music?’” says Wu Man. “So that’s the reason I want to bring something else that has never been seen here. I want to bring real folk tradition, and traditional Chinese music,” she adds. “It is very meaningful to introduce a different culture to younger generations.”

In the current political climate in this country — and the world — cross-cultural communication and collaboration is more important than ever. And music is a universal language that has no cultural or political borders — it is a language of the heart.

“We have so many different cultures on this earth,” says Wu Man. “We learn from each other — and it makes us stronger.”

Immeasurable Light, the new CD from Chinese pipa master Wu Man, virtually wallops you over the head with its first track, Jacob Garchik’s arrangement of The Round Sun and Crescent Moon in the Sky. Part of the repertoire of the Zhang Family Band, it is as raucous as it is joyous.

Wu Man: Have Pipa, Will Travel