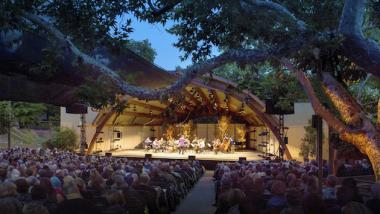 The Year of the Woman at the Ojai Festival

There may not be a grand banner fluttering over the 70th annual Ojai Music Festival declaring this “The Year of the Woman,” but there certainly could be. With the music of Finnish composer Kaija Saariaho as its central focus, the four-day festival (June 9–12, and June 16–18 at Cal Performances in Berkeley) conceived by Music Director Peter Sellars and Artistic Director Tom Morris will present a remarkably diverse array of women artists from around the globe — composers, performers, conductors, and speakers.

Sellars and Morris, both say they are pleased about the festival’s emphasis on women artists, but pointed out that the programs, beginning with the decision to feature Saariaho (who will be making her first appearance in Ojai), came together organically over a period of several years and not as a clever marketing gimmick.

“There was a time,” Sellars pointed out, “when if you said you wanted to make a point of inviting woman composers you had a list of three to choose from. Now there are different generations and there is so much diversity and depth representing an entire spectrum. But I don’t want to make it a cause. After all, no one comes out and says, ‘Tonight we are going to hear a concert by men!’ What’s so great now, is you can feature women composers, performers, and conductors without making a special point of it. There is a cornucopia of marvelous women that are writing music right now.”

The very idea of a year of the woman, proclaimed or not, makes musicologist and outspoken feminist Susan McClary, smile.

“That certainly is what the program looks like,” she concedes, clearly pleased. “And it is very exciting, all the more so because Peter and Tom didn’t go into this saying let’s program a festival with a lot of women. These people were chosen because of the quality of their work. I’ve said for a long time that Peter is the most important feminist we have. If I had programmed this festival, people would roll their eyes and say, ‘There she goes again!’ These choices were made because Peter and Tom believe in the talent.”

In 1991, McClary (who will participate in a series of pre-concert conversations during the festival with Sellars and Saariaho) published a controversial critique called Feminine Endings: Music, Gender, and Sexuality, in which she asserted that gender played an important role in Western European classical composition.

“The musicological community pushed back pretty hard,” she recalls. “They didn’t want music to have anything to do with gender. But there was also pushback from women composers who were afraid they would be put in a box. Pauline Oliveros (who will perform two meditative sunrise concerts during the festival) termed them ‘Lady Composers.’ What I was calling for was for music to do what art had done in the 1980s when women like Judy Chicago and Lita Albuquerque were making personal statements, not trying to say ‘my work is just as good and not distinguishable from work done by men.’

“Kaija Saariaho is a great example of a woman whose works stands on its own but also represents music written from a woman’s point of view. Ever since she began to create text-driven compositions (which coincided with her becoming a mother), Kaija has looked at issues like a woman’s changing body, being a mother, and the act of childbirth. These are things that should be part of music, and they haven’t been. Kaija is the most important woman composer who is knocking down those kind of barriers.”

According to both Sellars and Morris, presenting Saariaho at Ojai for the first time was the wellspring that ultimately shaped the entire festival. Their only disappointment was an inability to present the American premiere of her highly acclaimed 2015 operatic work, Only the Sound Remains (based on two Noh play translations by Ezra Pound), which was originally staged by Sellars. “We really wanted to present it in combination with La Passion de Simone, Morris said, “But it just proved too challenging.”

Now the festival will open with La Passion de Simone, scored for 19 musicians, vocal quartet, and soprano. The central role originally sung by Dawn Upshaw will be performed by one of Upshaw’s former vocal students at Bard College, soprano Julia Bullock. Bullock will portray the celebrated French philosopher, Christian mystic, and political activist Simone Weil, a woman Albert Camus described as “the only great spirit of our time.”

Then, for a late night concert Bullock will slip into a very different persona when she stars in the world premiere of Tyshawn Sorey’s Josephine Baker: A Portrait. Bullock will sing the role of the iconic African-American in Paris accompanied by the musicians of ICE (International Contemporary Ensemble) and the composer performing on piano and drums.

“What Peter brings to this year’s festival,” said Morris, “is a very intense understanding of the relationship between music and social issues. And that quality seemed very appealing for the 70th anniversary of the festival.”

No one who was there will ever forget Sellars’ first turn at the Ojai Musical Festival, in 1992. He staged Stravinsky’s A Soldier’s Tale on the back of a pickup truck with two, young, black lady hiphoppers providing the narration. The staging and the look of consternation on the face of conductor, Pierre Boulez, have become an Ojai legend.

“For a long time I’ve been absorbed in the idea of what a festival is and what it can be,” Sellars observed. “A festival offers an opportunity to gather people together in new ways and new combinations, intersections the world would not otherwise create.

“The music of Egyptian singer/song writer Dina El Wedidi,” Sellars continued, “is beautiful and passionate. It comes at a time when the initial excitement of ‘The Arab Spring’ has deteriorated into the chaos of ISIS. Dina and her band represent the voice of a generation of young Egyptians who are still determined to step into the future. We thought Ojai would be the perfect place to give her a showcase.”

Since Ojai was the longtime home of the great Indian educator, Krishnamurti, it seemed only appropriate to Sellars the festival include a musical reference. So, as the sun sets on June 11, the renowned Indian singer, Aruna Sairam and her ensemble, will intone a concert composed of various forms of South Indian folk music and ragas.

Other significant Ojai Festival premieres include Claude Vivier’s Kopernikus: A Ritual Opera; Caroline Shaw’s Don’t Let Me Be Lonely (an Ojai commission); and a new work by Cuban composer/conductor Tania León. León, whose compositions have been performed by international orchestras such as the Gewaundhausorchester, L’Orchestre de la Suisse Romande, the China National Symphony and stage by theater directors like Julie Taymor, will conduct the premiere along with a new work by Sharon Hurvitz. Both works will feature musicians from the L.A. Philharmonic’s Youth Orchestra L.A. (YOLA) and the members of ICE.

In the 1937 film, Lost Horizon, Ronald Coleman, near death in a blinding Himalayan snowstorm, staggers through a cleft in the rock and finds himself looking down on the sun-drenched, tantric paradise of Shangri-La. But the landscape that actually appeared on the screen was the Ojai Valley. In Sellars view, Ojai is Shangri-La.

For complete information and tickets for the 70th Ojai Music Festival visit the OMF website.
For information regarding “Ojai in Berkeley” presented by Cal Performances June 16–18, visit their website.