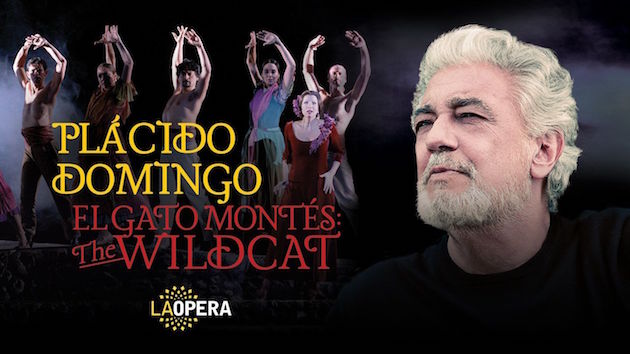 The only American opera company that has conscientiously tried to break down the barrier between “grand opera” and Spanish zarzuela is the Los Angeles Opera. And that effort is principally due to one man — Plácido Domingo, who will soon star in Manuel Penella’s verismo zarzuela, El Gato Montés. By way of the Teatro de la Zarzuela in Madrid, this new production opens May 4, with subsequent performances scheduled for May 5, 8, 11, 16, and 19 at the Dorothy Chandler Pavilion of the Music Center.

So why hasn’t zarzuela found its place in world opera houses?

Roots of an Art 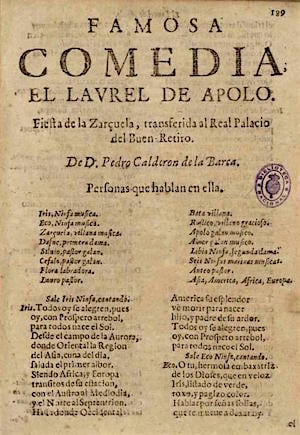 In 1657 (15 years after the premiere of Claudio Monteverdi’s opera, L’incoronazione di Poppea), King Philip IV of Spain, his queen, Mariana, and members of the court gathered at the palace of El Prado to attend a performance of Pedro Calderón de la Barca’s, El Laurel de Apollo (The Laurels of Apollo). Accompanied with music by Juan Hidalgo de Polanco, the performance combined operatically scaled solos (in Spanish) with popular songs and traditional dances. That performance is generally considered the first example of what would come to be known as zarzuela. The origins of the name itself are uncertain but may have derived from a hunting lodge called the Palacio de la Zarzuela near Madrid where early performances were presented.

During the centuries that followed, zarzuelas (and zarzuela companies) became an integral aspect of Spanish musical culture, fanning out across the empire from Madrid and Seville to Cuba, Mexico, South America, and the Philippines; There were Basque zarzuelas and Catalan zarzuelas. And over time the number of compositions in the repertory grew into the thousands.

“Zarzuela has played a crucial role in the history of our music,” observes Óliver Díaz, music director of Teatro de la Zarzuela in Madrid. “We already had zarzuelas in the Baroque era (that was the beginning of it), but it was around 1850 when Spanish composers had the dream of creating Spanish operas (in opposition to Italian opera which was the most popular genre at the time in our country). A few years later a group of visionary composers ([Francisco] Barbieri, [Joaquín] Gaztambide and [Rafael] Hernando among others) built the Teatro de la Zarzuela under their own auspices, and that was the beginning of a golden era for zarzuela. We have in the archives of the Spanish General Society of Authors (SGAE) more than 8,000 titles!

“Even though zarzuela was not part of my musical studies in my home town (Gijón, a middle-sized town on the north coast of Spain),” Díaz explained:

I had the chance to attend lots of performances: Private companies that were on tour used to perform the most famous zarzuelas at the Teatro Jovellanos (the main theater in Gijón). Also 25 kilometers away, in a city called Oviedo, there was (and still is) one of the most important zarzuela seasons in Spain. So yes, somehow zarzuela has been part of my life since I was a young music student. I also have memories of my family singing excerpts from zarzuelas when I was a little kid, but I never realized it was zarzuela until I discovered that music much later.

The entry for L’ Incornoazione di Poppea appears on page 15 of my 1976 edition of The New Kobbé’s Complete Opera Book. The final entry, Carl August Nielsen’s Maskarade appears on page 1665. In between there is not a single reference devoted to a zarzuela. Nor does zarzuela warrant so much as a notation in my dusty old edition of Grove’s Dictionary of Music and Musicians.

According to San Francisco Opera’s dramaturge, Kip Cranna, “San Francisco Opera has not staged any zarzuelas in our history.” However, he does recall one Bay Area musical institution, the Jarvis Conservatory in Napa, which he says, “used to do them all the time. But I don’t believe they do them anymore.”

When L.A. Opera first presented El Gato Montés, on Jan. 19, 1994, Plácido Domingo (still a dashing tenor) played the role of the young matador, Rafael Ruiz. The woman in his life, Soléa, was played by Verónica Villarroel. His nemesis, Juanillo (“The Wildcat”) was sung by Justino Díaz. The production was also from the Teatro de la Zarzuela, Madrid.

Of that opening performance, Edward Rothstein, writing in The New York Times, observed,

Opera has its own version of multiculturalism, which in recent decades has led to an increasing awareness of such diverse national traditions as the Finnish and Czech. Now, with the Los Angeles Music Center Opera production of El Gato Montés (The Wild Cat), which opened here last week, our complacent neglect of the Spanish opera may be in for a revision, too. This zarzuela, written in 1916 by Manuel Penella and, the Los Angeles company says, never before sung in this country in its original language, is dramatic, vigorous, and lyrically inventive.”

I asked Señor Díaz if he thought zarzuela has suffered from a form of cultural prejudice?

“I believe it is not because of a prejudice by the international community against our music,” he commented, “but rather because of our own idiosyncrasy. After the dictatorship in Spain [which ended in 1975] we have had a view of zarzuela as something very tied to our darkest past, since Franco himself used to listen to zarzuelas. Also, we have a natural tendency to be suspicious with everything that is produced in our country. This all together didn’t help to promote our music out of our country. Fortunately, enough artists like Plácido Domingo (no question one of the biggest artists of all times) have made an enormous effort to take our repertoire to every single corner of the world.

With its limited exposure, American audiences have no idea that there are so many different zarzuelas in so many different styles, from the mythology-based zarzuelas of the Baroque era to the most contemporary dramatic works, like the Teatro de La Zarzulela’s current production of The House of Bernarda Alba based on the play by Federico García Lorca. I asked Óliver Díaz about the variety of styles the art form offers. He explained:

Zarzuela, or Spanish opera as it is the case with El Gato Montés (the difference is if the piece has spoken text or not), has evolved in a similar way that the rest of the European theatrical music has but a few decades later: in the ’50s and ’60s of the 19th century, our composers were writing music in a somewhat Donizetti style, and El Gato Montés is a clear example of verismo opera, written in 1917. There were also many light comic zarzuelas. After 1950, approximately, Spanish composers stopped writing zarzuelas. Now we are trying to stimulate composers to write new zarzuelas, and that’s the case of La Casa de Bernarda Alba that we premiered a few months ago.

Ironically, when Plácido Domingo began his career he considered himself a baritone, but circumstances pushed him into the tenor repertoire. He first sang the role of Rafael in El Gato Montés in Mexico City in 1958 at the age of 17. Now as a baritone, he is returning to the opera, trading in his matador’s cape for a switchblade as he takes on the role of the outlaw, Juanillo, for the first time. The cape-work in the production will be handled by the Mexican tenor, Arturo Chacón-Cruz, with Ana María Martínez as Soléa, the woman devoted to the young matador, but in love with the outlaw. The conductor will be Jordi Bernàcer.

In a recent conversation, Domingo said he felt there were any number of reasons to bring The Wild Cat back to Los Angeles.

“It’s been 25 years since the opera was last seen in Los Angeles,” he reflected. “We were long overdue to bring back this wonderful piece. We’ve been presenting Spanish works every three or four seasons lately in Los Angeles [particularly Daniel Cátan’s Florencia en el Amazonas and El Postino]. I wanted to schedule one for this season. Having switched over to singing baritone roles, it dawned on me that Juanillo would be a fantastic part to perform. Additionally, the Teatro de la Zarzuela has had enormous success with its striking new production, which I was eager to bring here as soon as I saw it, so the timing was perfect.”

Zarzuela in His Blood

There is a wonderful song that Judy Garland sings in A Star is Born about being “born in a trunk in the Princess Theatre in Pocatello, Idaho.” If there is a Spanish zarzuela equivalent it would certainly be Plácido Domingo, who grew up on tour and back stage watching his father, Plácido Domingo Ferrer, and his mother, Pepita Embil, perform zarzuelas as stars of the Domingo-Embil Company.

Their son, Plácido, was born in Madrid (Jan. 21, 1941) before the family made the move to Mexico as part of a zarzuela company managed by Federico Moreno Torroba. Many years later, Domingo would honor his father by creating a special zarzuela category (that bears Ferrer’s name) as part of his international vocal competition, Operalia. In 2005, the zarzuela prize was won by Arturo Chacón-Cruz, who will soon be seen as the brave matador, Rafael, in El Gato Montés.

Chacón-Cruz, who grew up in Sonora, Mexico, recalls how, as a member of his town’s chorus, he would occasionally have the chance to perform solo arias from the most popular zarzuelas.

“When I was a teenager, we would travel to these small towns where we would sing in gymnasiums or the town square, sometimes in the church. I found that the zarzuelas we sang were a great way to interact with new audiences because the music sounds like opera, but it’s in Spanish. The stories also tend to be festive and very approachable. I think those concerts helped to introduce people to zarzuelas. Now when there is a zarzuela concerts, it almost always sells out.”

For most Los Angeles Opera audiences, the upcoming performances of El Gato Montés will represent their first exposure to a zarzuela. Óliver Díaz thinks they are in for an exciting surprise.

“This is a production that I have had the luck of conducting myself and I can say it is a wonderful production that underlines the dramatic aspects of the story, where all the characters are influenced strongly by the roots of Andalusia and its gypsy traditions and superstitions. I hope, and I’m sure it will happen, that it will be a big success in L.A., so I strongly recommend everyone to go to the theater and enjoy this wonderful opportunity of seeing Plácido Domingo in one of the biggest roles of Spanish music.”

Correction: Opening night is May 4, not April 27 as stated in the article as originally published.

Plácido Domingo Lowers His Tessitura, But Not His Standards

After successfully rebounding from colon cancer in 2010 and an embolism in July of this year, 72-year-old Plácido Domingo has proven that you can't keep a good tenor down.

James Conlon directs the company premiere of a Mozart masterpiece.